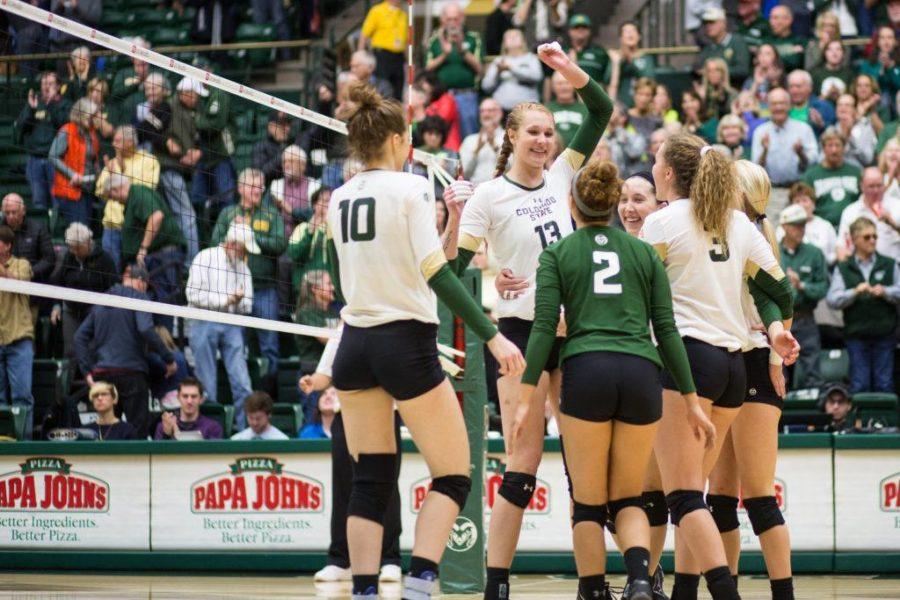 Kirstie Hillyer (13) celebrates with her teamates after her game winning score against Air Force on Saturday. (Ryan Arb | Collegian)

The hay is in the barn for the CSU volleyball team.

The Rams have done all they can, now the fate of their season lies in the hands of the NCAA tournament selection committee.

It was a back-and-forth, replay-filled doozy of a match that featured 44 ties and 20 total lead changes. Sanja Cizmic was on-fire, finishing with a career-high 27 kills on 55 attempts and a .436 hitting percentage. Jasmine Hanna was behind her with 20 kills while Kirstie Hillyer added 13 to go along with 10 total blocks.

It was also Senior Night for CSU, in which they honored libero Cassidy Denny, the lone senior on the squad. And for her final time taking the floor at Moby, it was awfully sweet.

“Of course it had to end in five sets against Wyoming. It couldn’t have ended any other way,” Denny said of her last match in Fort Collins. “It was amazing.”

Interestingly, Cizmic deflected all the attention on Denny afterward, too. And during their last match together in Moby, and possibly ever, she wasn’t going to let it end in defeat.

“This is my last match with Cass in Moby,” Cizmic said. “I just decided I was going to play this one for her. I didn’t want to let us lose in Moby for her Senior Night because she’s an amazing captain,” she said as she and Denny shared a hug.

Several times throughout the match, it looked like a set or the match was going to come to a close or end with a different result, but replay challenge had other plans. In the third set, Wyoming initially appeared to win 25-23 before head coach Tom Hilbert challenged a Wyoming touch on a Ram attack that sailed out-of-bounds. The call was reversed and the set remained knotted at 24.

It would then be CSU’s turn to take a taste of the replay medicine. A Cizmic kill down the line later in the set appeared to clinch the third set once-and-for all the Rams, but the call was once again reversed on a Wyoming challenge and play continued before the Cowgirls scored the final two points of the set to win it, 30-28.

But, the final bit of momentum would go the Rams’ way. During a long rally, a Cizmic tap appeared to find its way to the ground beneath the outstretched hand of a diving Wyoming defender. But officials let play continue and Wyoming’s Reed Copeland buried what looked like the match-ending kill. Until Hilbert, thanks to the adamant pleas of senior libero Cassidy Denny, challenged once more. The call was reversed and CSU would end up winning the set 27-25 on a Cizmic kill.

CSU then trailed only once in the fifth set, and used a pair of tag-team blocks from Hillyer and Olivia Nicholson while cooling off a mini three-point run from Wyoming before the woman of the match, Cizmic, ended it with a kill.

Now the Rams play the waiting game. And Hilbert likes his teams’ odds of gaining an at-large berth in the tournament.

“I feel good about them,” he said. “I believe this win moves us up in RPI. The little calculations I’ve done, there’s a lot of automatic qualifiers ahead of us which is a good thing…Who knows what the NCAA committee will do. Whether they jump people or whatever they do. The MW significantly improved their conference RPI this year, we moved from 14th to 7th. I think that’s a case to put three teams from the MW in, so maybe Vegas gets in, too…I think we are high enough to get in.”

The NCAA tournament selection show will be held on Sunday at 7 p.m. MT.