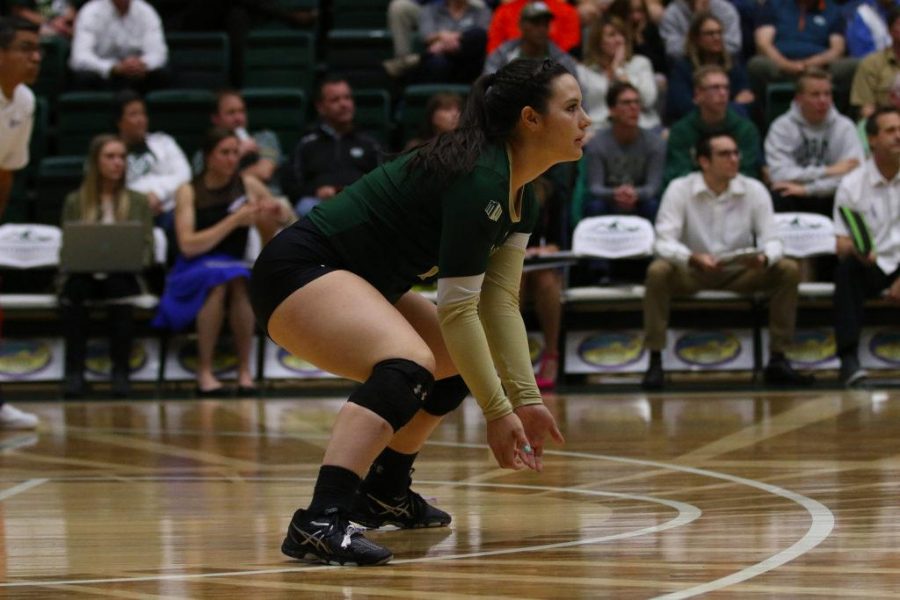 Sophomore Mariah Green waits for a UNLV attack during the 5th set of action on November 3, 2016. (Elliott Jerge | Collegian)

Being a member of the CSU volleyball team’s ‘BOM Squad’ is a thankless job.

They go to practice every day, but their main responsibility for a majority of the practice is to pretend to be someone else. They simulate other teams’ looks and they try to emulate the tendencies of opposing teams’ players while providing the most realistic look possible.

They seldom get the credit they deserve and their opportunities to play in matches are often limited. But that doesn’t mean the job is any less rewarding.

For several of CSU’s players, it is a role they have embraced whole-heartedly throughout the course of this season.

Volleyball is also a unique deal when it comes to match preparation. It is not football where there are roughly 90 players on the team, some of who are solely dedicated to playing scout team. ‘BOM Squad’ mainstays Jackson and redshirt sophomore Mariah Green have a lot on their plates. They are tasked with not only having to rep opponents’ stuff in practice, but also must be capable of stepping in and executing during a match if needed.

Jackson has appeared in 10 sets this season while Green has played in 15. Although their court time is not extensive, the balance of this can be challenging.

“It’s difficult but they do a good job with it and they know they have a duality in what they have to do,” coach Tom Hilbert said. “They also learn our team really well. That adds to their effectiveness because they know how to read our attackers, they know how to block our attackers. That helps them and it helps create a really competitive environment in our gym.”

Hilbert also raised another point while talking about their vitality to the team. Simply mimicking what an opponent does isn’t always enough, they need to make life tough on the starters. And when they do this, everybody benefits.

“They understand how important it is for them to push our top squad and they take a great deal of pride in doing it,” Hilbert said. “It’s something they have to do every day and they know sometimes it’s thankless, but it’s very, very important.”

At some point, it is safe to say that almost all of CSU’s players venture over to the other side of the net during practice to lend a hand in scout work. But the main cogs of the ‘BOM Squad’ are of course Jackson and Green, as well as freshman Breana Runnels, who is redshirting this season.

Interestingly, jumping in-and-out of roles is not as much of a challenge as it might seem like. In fact, emulating a different player every week is the fun part for Jackson. And the versatility of doing so just improves her individual game.

“I think that’s the fun part of it because you get to do so many different things and learn so many different shots,” Jackson said. “It’s really important to step into those roles and embrace it. Being these high-level players and pretending to play like them, I think that really helps my game because I’m hitting at a higher level. They’re like ‘This girl is the best hitter on the team’ and I’m like ‘Alright, let’s go.’ It’s definitely fun and has improved my game.”

Green, on the other hand, is a Fort Collins native, a graduate of Heritage Christian who walked on to the team.

She grew up coming to games and following the team as a youngster, so now being able to be a part of it in any capacity, is quite the sweet experience.

“I grew up coming to a lot of games and thinking ‘That would be really neat to get out there and play college volleyball,” Green said. “I love it, it’s a really cool place to play. It was really cool to grow up watching it and now to be in there, that’s really neat.”

Green is in a different boat than Jackson, she plays defense, which comes with a different set of responsibilities. She mentioned that there is a bit more crossover between opposing teams’ bac krow tactics and CSU’s. Her duties entail less role-playing and emulating, and more just being in the right position.

Being an effective member of the ‘BOM Squad’ certainly requires a bit of an ego-check. It is not the most glamorous position. But, as Green said, there is a lot of growing and learning that takes place as a member of the squad.

It’s not easy and it can be tiring, but without their contributions, CSU is not sitting at 11-2 in conference play heading into a match against San Diego State Thursday night. They are likely not contending for their eighth consecutive conference crown, either.

When the Rams win, the ‘BOM Squad’ has played a quiet, yet immeasurable part in that.

“We have a lot of fun making them better and getting great digs and swings. I think it’s really rewarding knowing that we are helping them prepare for other teams. When we win we are a part of that,” Green said. “Even if we aren’t on the court, we are still a part of that.”