CSU rallies to beat SDSU and earn another road victory 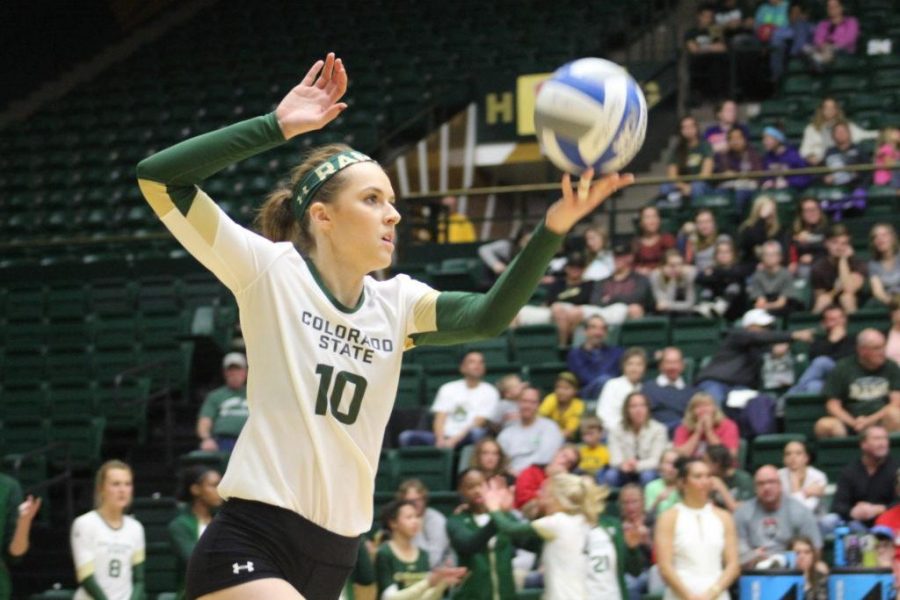 Sanja Cizmic prepares her serve against the New Mexico Lobos.

Another match, another five-set thriller.

Trailing 2-1 after three sets to San Diego State on Thursday night, CSU volleyball stormed back to defeat the Aztecs in five sets 22-25, 25-21, 18-25, 25-20, 15-9 to earn their third consecutive five-set win. Last Saturday, CSU dropped the first two sets against New Mexico, before responding by rattling off three set wins in a row to cap a comeback win over the Lobos.

CSU (18-7, 12-2 Mountain West) came through in the clutch once again and should maintain pace in the MW conference race. Entering the night, the Rams sat tied with Boise State atop the conference standings while Wyoming was one game back.

Thursday night’s contest was a see-saw battle and neither team boasted outstanding offensive matches. The Rams hit .169 for the match and the Aztecs checked in at .146. CSU overcame 13 service errors and an astounding 24 kills from SDSU’s Alexandra Psoma. In their first matchup on Oct. 15, CSU limited Psoma to just two kills.

SDSU was able to take advantage of eight Ram attacking errors and four service errors to claim a first-set victory. The Rams then rebounded in the second set, and hit .300 to knot up the match heading into the break.

The Aztecs then handled the Rams in the third set. After CSU jumped out to an early 5-0 lead in the fourth set, SDSU rallied back to eventually hold an 8-7 lead. Both teams battled it out closely, but the Rams closed out with superb end-game play. CSU used a kill from Sanja Cizmic and a crucial tag-team block from Kirstie Hillyer and Olivia Nicholson to gain a 22-18 advantage and force an Aztec timeout.

Coming out of the brief break, the Rams then closed it out with three of the final five points, punctuated by a Cizmic kill at the end to clinch it.

CSU looked awfully comfortable in the fifth set, a place they have grown accustomed to in the last week. The Rams clobbered SDSU in the set, racing out to an 8-1 lead and stonewalling the Aztecs at the net. At one point, CSU recorded four blocks in a row to push the lead to seven before SDSU called timeout.

SDSU ran off four consecutive points at the end to make the set score look closer than it was before a service error clinched the match for the Rams.

The CSU attack was not nearly as efficient as it usually is, as four players hit below the .170 mark. Alexandra Poletto led the way, tallying 12 kills on 26 attempts. Cizmic matched her with 12 kills on 32 swings but did have eight errors.

CSU’s blocking was excellent, especially late in the match. The Rams totaled 18 blocks as a whole with Nicholson leading the bunch with a whopping 11. Hillyer and Poletto both chipped in eight from their middle spots.

The win keeps the Rams in a comfy position heading down the stretch run of the season, with what could be the de facto conference championship match looming next Wednesday at Boise State.

But for now, the Rams will complete their west coast road swing against Nevada in Reno on Saturday at 2 p.m. MT.