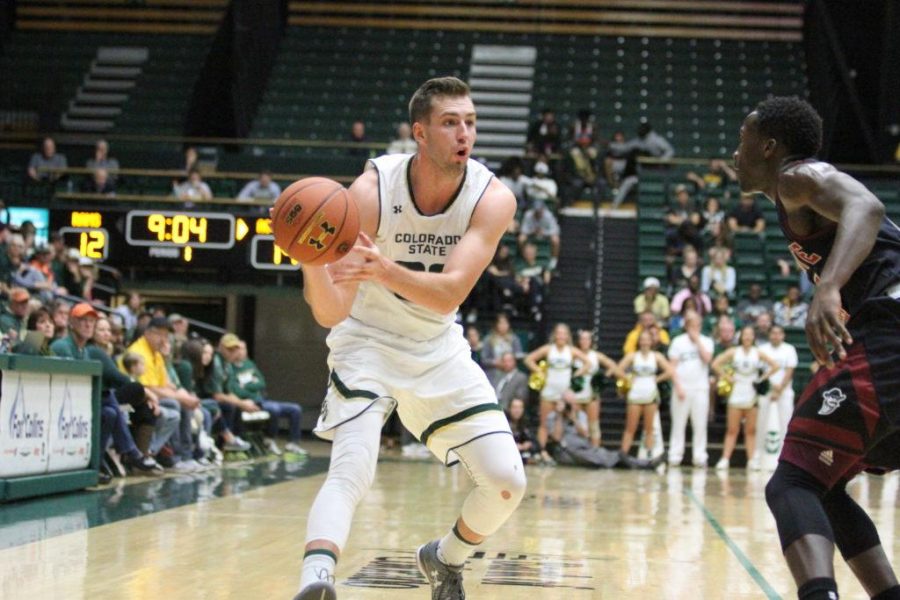 Colorado State had no rhythm shooting the ball against New Mexico State in their season opener Sunday, but when the final buzzer sounded, the Rams managed to come out on top 64-61.

“We need get in transition and make some easy baskets,” head coach Larry Eustachy said. “Antwan (Scott) is not here, we don’t have that deadly shooter.”

New Mexico State jumped out to an early 19-8 lead in the first half. CSU was able to claw their way back into the game due to solid shooting at the free throw line, making 25 of 31 free throw attempts, good for 80.6 percent. The Rams shot 71.8 percent from the stripe last year.

In his first official game with the Rams, junior college transfer Braden Koelliker stepped up to lead in the absence of Gian Clavell, who remains suspended indefinitely following a false imprisonment arrest on Nov. 9. Koelliker was the high scorer in the game, scoring 21 points, going 13-of-15 from the line, while also grabbing nine rebounds.

Though he looked awfully comfortable at the free throw line, this was not a role he often took while playing for Snow College last season. At Snow, Koelliker converted 72 percent of his free-throws, however only averaged 4.2 attempts per game. In his 30 games for Snow, the most free throws he attempted in a single game was 10.

“I think (the game) was a night that was different for everyone,” Koelliker said. “Everyone had to take on roles that they’ve never had to before. I’m just grateful that I practiced my free throws these last couple of practices.”

Going into the locker room at halftime, CSU was 1-for-11 from three point range. Shooting 9 percent from behind the arc poses a problem for any team, but for a team that shot 36.4 percent from three last season, it’s an issue CSU may not be accustomed to handling.

“We’ll take a W any way we can get a W,” Koelliker said. “I think that’s how it was (against New Mexico State). We recognized that we could get to the rack and draw fouls. That’s what we took advantage of.”

The Rams were fully aware that they were ice-cold shooting the ball after the first half. As a result, they emphasized taking less jumpers and more high-percentage shots for the remainder of the contest.

“We just made getting to the rim an emphasis at halftime,” junior forward Che Bob said.

Though the 27 fouls the Rams drew in the game was a significant contributor to their victory, head coach Larry Eustachy was not pleased with the referees blowing the whistle so frequently.

“There were too many fouls called,” Eustachy said. “That’s what they do at this time of year as we all know. It eliminated Emmanuel (Omogbo), it eliminated some of their guys. It was frustrating for both coaches but we knew it was coming.”