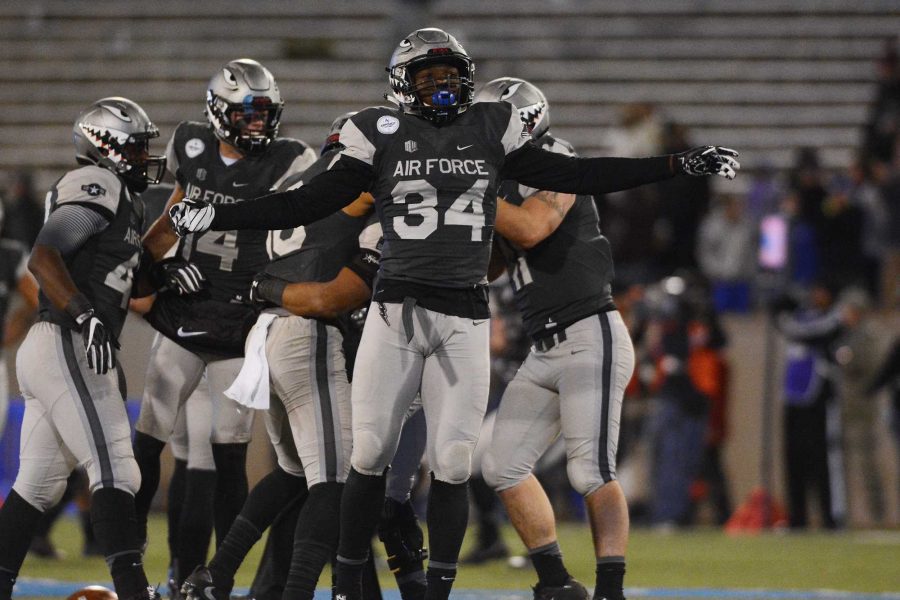 COLORADO SPRINGS- It was a Saturday night shootout at the Academy, as Colorado State and Air Force traded blows for 60 minutes.

In front of 23,467 fans at Falcon Stadium and four quarters worth of lead-changes, CSU fell 49-46 to Air Force, staying one win shy of bowl eligibility for the fourth consecutive season.

“We didn’t do the things we needed to do,” CSU head coach Mike Bobo said. “We have to give those guys credit, they made more plays. We didn’t win the special teams battle, like we needed to do that could be a difference in this ball game. We didn’t win the turnover battle, we finished at 2-2, two costly turnovers offensively…we didn’t win enough one-on-one battles. There were a lot of one-on-one battles that we won, but they made their fair share of theirs and made more, which was the difference in the game.”

It didn’t take long for the scoring to get underway. On just the third play from scrimmage junior running back Dalyn Dawkins scampered for a career long 61-yard touchdown run, putting CSU up 7-0. Dawkins carried the ball 14 times for 102 yards ands two touchdowns.

Air Force responded with an eight play 75-yard drive of their own. Tim McVey capped the drive off with a 10-yard touchdown run. McVey was a major thorn in the Rams’ side in the first half. McVey would go on to finish the night with 15 carries for 184 yards and a career high four touchdowns. As a team, the Falcons finished with 485 yards rushing.

“Their quarterback (Arion Worthman), he’s a difference maker,” Bobo said. “He did a nice job of pitching the ball late. They really hurt us outside a lot…the big thing was on the perimeter.”

“We’ve got to be able to get off blocks to stop the pitch, stop the dives, things like that,” CSU safety Justin Sweet said. “(We’ll) get into film on Monday and try to work it out.”

CSU running back Izzy Matthews continued to have a nose for the end zone. Matthews put the Rams up 14-7 on a 3-yard touchdown run. Matthews holds the team lead with nine touchdowns on the year.

Air Force would tie the game 14-14 on the next possession via another McVey touchdown, this time off a 6-yard reverse. The back-and-forth play would continue, until CSU junior safety Justin Sweet returned an Arion Worthman interception 27 yards, putting CSU up 24-14, marking the first non-offensive touchdown of the year for CSU.

Despite all the momentum being on CSU’s side at that point, the rest of the half belonged to the Falcons.

Air Force rallied off 14 unanswered points to end the half via a 54-yard run by quarterback Arion Worthman and a 15-yard run by McVey. The Falcons ran for 278 yards in the first half on 24 carries.

The chaos persisted in the second half, as McVey scampered down the sideline, eluding several CSU defenders en route to the end zone. Senior linebacker Kevin Davis was able to poke the ball lose before McVey could cross the goal line, but Air Force center Dylan Vail fell on the lose ball to put the Falcons up 35-24.

CSU returned the favor of evaporating a double-digit lead.

Nick Stevens hit Robert Ruiz from 10-yards out to cut the lead to 35-31, and CSU re-took the lead their next drive when Dawkins punched it in a 2-yard run.

No lead was safe, however, as Air Force answered with a 5-yard touchdown run from Tyler Williams, putting the Falcons up 42-38. Air Force would add to the lead in the fourth quarter, as McVey tallied his fourth score of the game to put Air Force up 49-38.

The fireworks were not over.

Michael Gallup extended his touchdown streak to five games, as he hauled in a 7-yard pass from Stevens and added a two-point conversion, cutting the lead to 49-46 with just over six minutes remaining. Gallup set career highs with 13 catches for 213 yards to go along with the touchdown. Stevens would also set a career high in passing yards, finishing the game 22 of 29 for 374 yards passing with two touchdowns and one interception.

“I thought Nick Stevens played awesome,” Bobo said. “I thought he showed tremendous poise. I though he threw the ball extremely accurate. I thought he made plays under duress a couple times. We protected well most the night…I thought he played outstanding tonight. Probably the best game he’s played in his career.”

After forcing an Air Force punt, CSU took over at their own 10 down with two minutes and 25 seconds left in the game, trailing by a field goal. Michael Gallup took a slant route over the middle, but Grant Ross forced a fumble on the play which was recovered by Air Force, ending any attempt at a game-winning drive.

“Obviously (Gallup) is down on himself, but we just have to tell him keep your head up, keep working,” Stevens said of Gallup’s fumble. “The ball is going to come your way. I’m not going to stop throwing him the ball, so he just has to be ready to push on, move forward and come out next week ready to play. I think he had a great game. The sad thing is he is just trying to make a play and then (the fumble) happened. It was a great play by the defender, so credit him for that, but (Gallup) is a hard working guy who really wants to win.”

CSU will be back in Fort Collins for the final game at Hughes Stadium Nov. 19, when they take on New Mexico, another option attack offense.

Michael Gallup set career highs with 13 catches and 213 yards and one touchdown. Gallup has a touchdown in five straight games., seven total on the season.
Nick Stevens set a career high with 374 yards passing.
Justin Sweet’s pick-six was the first non-offensive touchdown CSU has scored this season.
McVey (184) and Worthman (143) both eclipsed the 100-yard mark on the ground for Air Force. McVey aslo set a career high with four rushing touchdowns.
Now at 5-5 overall, CSU remains one win shy of becoming bowl eligible for the fourth straight season.
The 95 points scored Saturday night were the most ever in the CSU-Air Force rivalry, eclipsing the 84 points scored in 2000 during a 44-40 Air Force win.
CSU’s 485 rushing yards given up are the most by any team in the Mountain West this year.