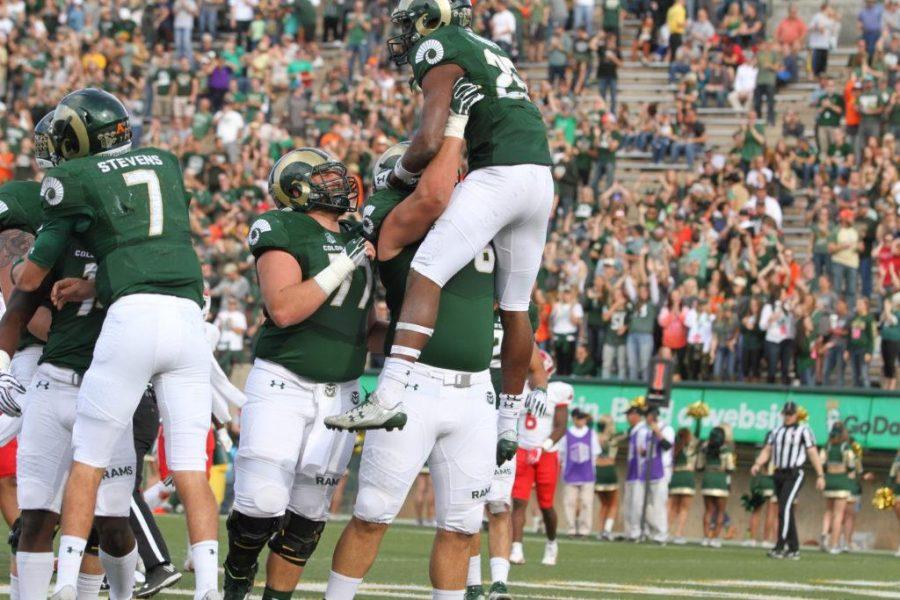 It is no secret that Colorado State’s offense has played much better over its last two games in the team’s 42-23 win over the UNLV and 37-0 win over Fresno State.

Coach Mike Bobo said that much of that play results from the team’s offensive newcomers coming into their own and from having a consistent group of playmakers on the field at the same time.

Nick Stevens is settled in at quarterback, the running back rotation is rolling, and Michael Gallup, Robert Ruiz, Olabisi Johnson and Anthony Hawkins have emerged as the primary pass-catchers on the outside.

With that, CSU’s offense has made strides.

But the Rams’ offense would not have had the chance to settle in and take off if it was not for the consistent, and frankly stellar, play of the most unheralded group on the field, the offensive line.

“They are a big key to our offense and they have only gotten better,” Bobo said. “Because of their consistent play week in and week out it’s allowed our playmakers that were a little bit young to develop and now that they have developed, I think we are starting to make a few more plays.”

Over the last three games, the CSU offensive line has only allowed one sack. Over the whole year, they have only given up 1.33 sacks per game, good for 19th in the country.

And over those last three games, the Rams averaged 222.3 yards rushing per game, and currently rank 41st in the country at 199 rushing yards per game.

“I have said all year that I really believe our offensive line is playing extremely well,” Bobo said. “I thought they played well all year. We haven’t played great at the quarterback position or we haven’t made enough runs at the running back position which is the playmakers around that offensive line.”

To be successful on offense, consistent play from the offensive line is a must. But with the revolving quarterback situation in the first half of this season, and the development of the youth that CSU was counting to step up and contribute to the offense, a solid group upfront was even more imperative.

Though the Rams have rotated players upfront for most of the year as with the rest of the offense, a set starting five has taken hold in the last few weeks in tackles Nick Callender and Zack Golditch, guards Fred Zerblis and Paul Thurston and center Jake Bennett.

Trae Moxley has started three games and played in every game as a supplementary tackle, and it’s the same with guard Colby Meeks who has made four starts this season. The rotation has worked to give the offense different looks and build experience for players like Meeks and Moxley who not only need to be counted on now, but also in the future.

“I really don’t think we skip too much of a beat when we rotate,” Bennett said. “It just keeps guys fresher and we can keep rolling throughout the game.”

And though there is the rotation, the group has been primarily led by the mainstays in Bennett, Golditch and Zerblis. The group represents a pretty solid trio to build a foundation on.

“I think Fred (Zerblis) has had a really good year and they have done some good things,” Friend said. “I think Jake is a better player than he was this time a year ago and he will continue to work and do that. Zack has to play a few more positions than everybody else to kind of give us a little bit of that rotation that we were talking about but he has done fine, they have just go to keep going.”

Gallup, Stevens or even freshman running back Marvin Kinsey’s standout play over the last two games may be the talk of the team, but that’s not where the success starts, It’s that foundation that has been laid upfront.