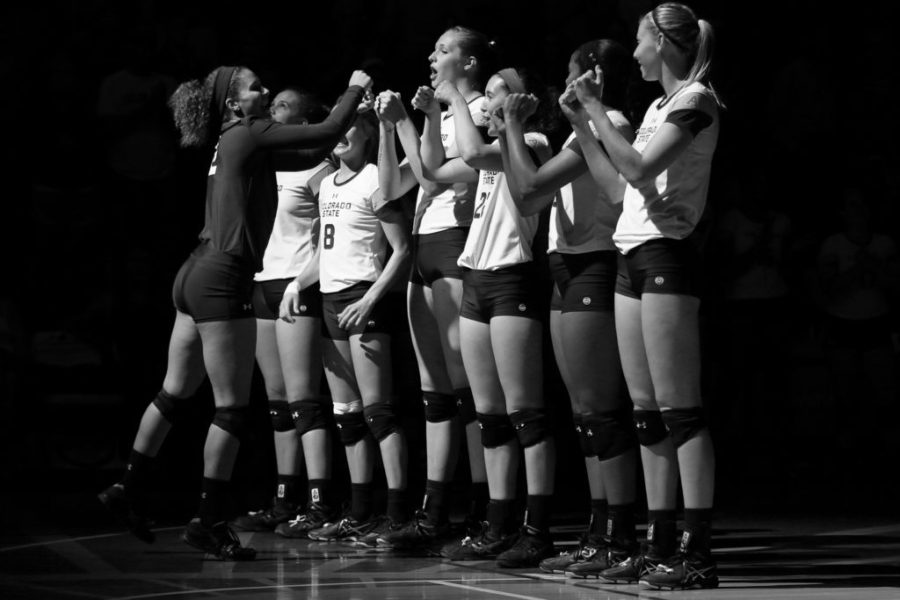 CSU Starters are announced prior to their game against Wichita State University. (Elliott Jerge | Collegian)

The Colorado State volleyball team is tired, and not because of their draining five-set victory over New Mexico.

They are tired of seeing a country divided by issues surrounding race, which they vocalized during their match Saturday against the Lobos by making posters to hold during the national anthem.

A couple of the signs read, “If I love you, I have to make you conscious of things you do not see,” and “There comes a time when silence is betrayal.”

Other signs honored the 50th anniversary of the Selma March on Nov. 5 of 1965, where Martin Luther King Jr.’s Southern Christian Leadership Conference marched round the clock for three days from Selma, Alabama, to Montgomery, Alabama, in an effort to secure rights for black voters.

“When we turn on the television or even look at our latest Facebook feed, we are constantly bombarded with incidents that reflect the brokenness of this country,” senior Cassidy Denny said after the match. “We can no longer accept that random incidents leading to deaths of people of color are isolated and surely not random.”

The entire team attended the post-game press conference as an act of solidarity, and an effort to spark a conversation surrounding the issue. Denny read a statement that the team put together about the issues facing African-Americans today.

“Today the CSU volleyball team would like to take a moment to reflect upon the social injustices happening in today’s society,” Denny read. “This moment isn’t for us to talk about this volleyball or perpetuate a pity-party on any particular person or community, but for us to talk more about more prominent issues in society that are real for people in this country whose voices have been rendered silent.”

Denny has been a vocal advocate for the issue both in person and on social media. She has been at the forefront of CSU athletes trying to speak out about racial inequality. A meeting in Moby Arena two weeks ago discussed athlete activism and social justice, and is where Denny and freshman teammate Jessica Jackson were moved to personally continue the discussion in a positive manner.

This meeting was hosted by Albert Bimper, the senior associate athletic director for diversity at CSU, and started a team conversation around the issue. Denny said that prior to the meeting, conversation surrounding issues of racial inequality amongst the team were sparse.

But, after six or seven of Denny’s teammates attended the meeting, several players have approached her and Jackson to ask them about what it is like being black in this country, and asking what they can do to help.

“For me, I knew what was happening in society, and I knew what was happening in the nation, but the meeting helped me figure out ways that we can do something about it,” Jackson said. “Before that, Colin Kaepernick took a knee, he made statements to the media and the news press, but we wanted to do something that was beneficial, that could help people.”

The team said they recognize that, as athletes, they have a special platform they can use to send out this message because of the media attention they get, and because of what they were able to learn from that meeting.

“Our big thing with the signs and this speech is to just start the conversation, and bring awareness” Denny said. “Get something started.”

A conversation is what the team believes is needed to start moving in a direction towards change. They hope that their team conversations can reach out to the CSU community and push people towards having conversations of their own.

“We are asking you, as people who have continued to support our volleyball team, to commit yourself to supporting the person behind the jersey and their everyday struggles on this campus and in this town,” Denny said. “It starts with one person. If one person does it, then 10 people will do it, then 100 people will do it, and eventually conversations will turn into actions, which will turn into change.”