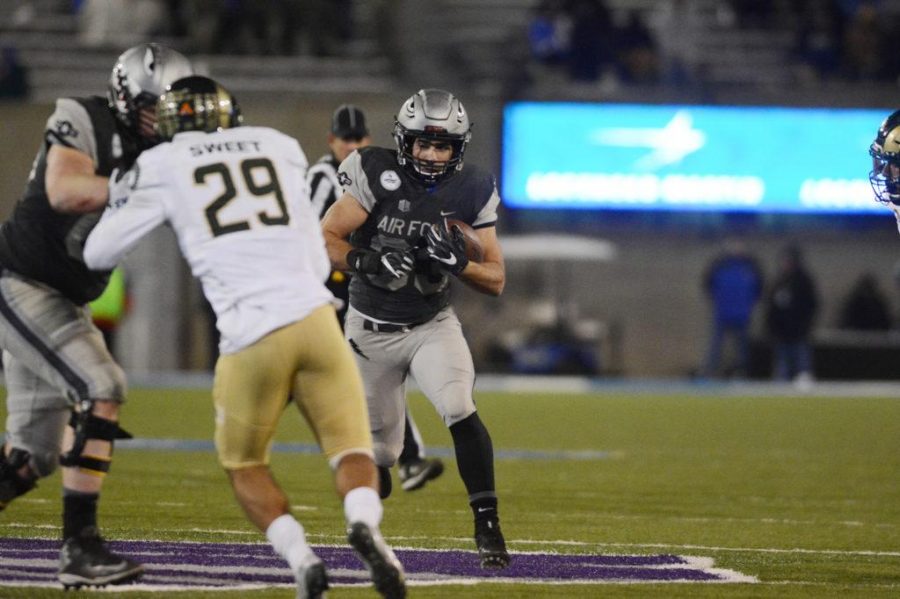 Normally, a shootout in a college football game is laden with high powered gunslingers and miles worth of passing yards. On Saturday night, the Air Force Falcons (7-3, 3-3 Mountain West) found a way to light up the scoreboard through the ground game in their 49-46 win over Colorado State (5-5, 3-3 MW).

On the other end, the CSU defense gave up 485-yards rushing in the game. It now stands as the most yards given up on the ground by any team in the Mountain West this season.

On the year, Air Force ranks 5th in the country at 290.7 yards rushing per game. On Saturday night, the Falcons almost matched that number in the first half, picking up 278 first-half rushing yards.

The Rams particularly struggled containing the Falcons on the outside. If the defense had quarterback Arion Worthman covered up, the pitch man was open for the toss, if the pitch man was covered, Worthman was free to make the play on his own.

“Their quarterback, he is a difference maker,” coach Mike Bobo said. “You have to have a quarterback that can affect you in all phases of the option. He did a nice job of pitching the ball late. They really hurt us outside.”

Option defense is assignment defense, and linebacker Kevin Davis said that the defense knew the assignments, the Falcons just won more one-on-one battles on the outside.

“I mean we were there, we were just getting blocked,” Davis said. “We just have to get off blocks. When we get off blocks when we can make plays. We practiced that all week, we knew what we were doing in certain formations. It was nothing we haven’t seen.”

To give credit where credit is do, the Falcons were very effective in blocking the Rams on the outside and down the field. Air Force won at the point of attack on the perimeter, and it showed.

“The big thing was on the perimeter, the quick pitch to the slot back, and then the option, the late pitches,” Bobo said. “They were doing a great job of getting on our backers, and getting on our middle field safety with their tackle and cutting him, and blocking our alley player and our corner. We didn’t do a good enough job getting off blocks. They are good at what they do.”

The pitch man on the outside who was free to run the most was junior tailback Tim McVey who picked up 184 yards on 15 carries.

He had four rushing touchdowns, and very well should have had five. The potential fifth one came on Air Force’s first drive out of halftime. It was a drive that encapsulated the Ram’s defensive problems on the day, when even halftime could not completely fix what went wrong in the run game in the first half.

On the first play out of the half, McVey took a pitch from Worthman for 30 yards.

Two plays later, Worthman made defensive end Darnell Thompson miss at the line of scrimmage and hit McVey with a late pitch down the Air Force sideline. Thirty-eight yards later, McVey had the ball punched out from behind by Davis as McVey hit the CSU four-yard-line, but it would not be a turning point for the Rams, as center Dylan Vail fell on the ball in the end zone and the Falcons took the a 35-24 lead coming right out of halftime.

And Worthman himself had a big game on the ground, finishing with 143 yards on sixteen carries to go along with a 54-yard touchdown run in the second quarter.

Outside of of that first drive out of the half, the Rams played better on the boundary and started to limit the chunk rushing plays, but the defense still could not get the Falcons offense off the field. For the game, Air Force had eight rushes of at least 15 yards, three of which went for 30 yards or more.

“We had a lot of missed tackles out on the perimeter,” safety Justin Sweet said. “Getting off blocks really was the biggest thing for us on the perimeter. We know we have to make those tackles.”

Yes, 485 rushing yards can come from a lot of missed tackle and lost one-on-one battles on the outside, but at the end of the day, the assignments need to be cleaned up on the outside.

After all, an even more potent rushing attack waits from the Rams next Saturday when the New Mexico Lobos come to town for the last game at Hughes Stadium.