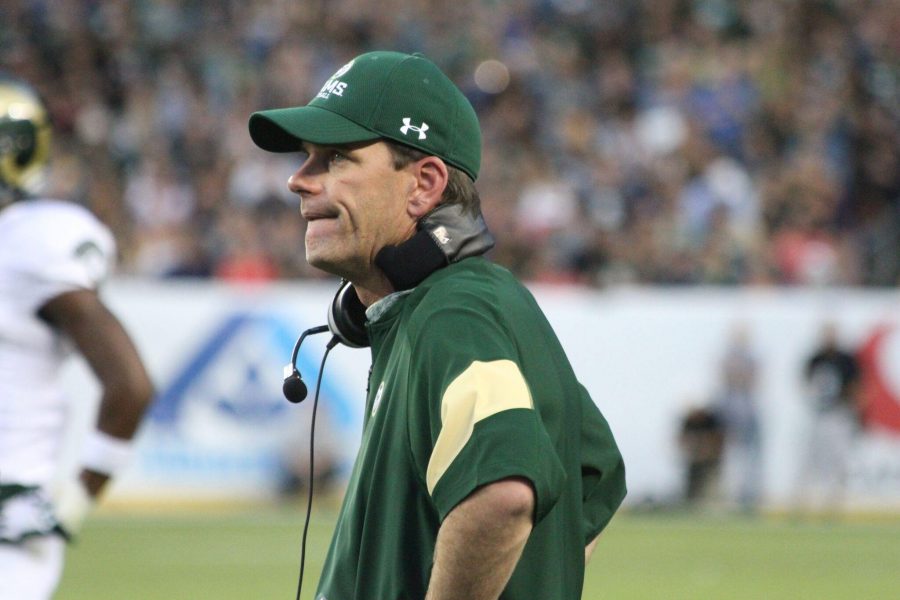 BOISE, IDAHO- Sixty has been a difficult number for the Colorado State Rams this season.

But playing a full 60 minute game has escaped the Rams too often this season, and nowhere was this more evident than in Saturday night’s 28-23 loss to Boise State.

For the opening 30 minutes, and the final 10 or so, the Rams showed that they could play with the No.15 ranked team in the country.

They were just completely undone by the twenty minutes in the middle when a sluggish offense couldn’t move the ball, and a worn down defense finally cracked under the pressure of the bevy of Boise State playmakers.

It’s hard to argue with “amazing” when talking about the first half defensive performance. The young Rams defense held down the best offense in the conference in the opening 30 minutes. The sloppy weather certainly might have helped slow down quarterback Brett Rypien and company, but for the second consecutive half, the CSU defense came to play.

Seventy-five of Boise’s 176 total yards in the first half came on the Broncos’ lone scoring drive in the first half, and All-Mountain West performers in running back Jeremy McNichols and receiver Thomas Sperbeck were relative non-factors in the opening half.

The defense has had plenty of moments this season where they did not look like a team replacing eight starters: The first half on Saturday, the second halves against UTSA and Utah State.

They have flashed brilliance, and at times incompetence. Linebacker Kevin Davis said after the game that the standout flashes are starting to fuel confidence in a defense that is gaining energy every week. There just needs to be a complete effort.

And on the offensive side of the ball, it’s the exact same story. After another strong opening start when the team scored on its first possession, the offense put on the brakes fast, and punted enough chances to Boise State for the Broncos to eventually start finding the end zone in bunches.

And when Nick Stevens and Michael Gallup started connecting and punter Hayden Hunt gave the offense multiple second chances, the Rams were able to play the last ten minutes of the game at a very high level offensively.

It showed what the CSU offense could do when they were executing, just like last week’s inspired comeback against Utah State in the second half.

But 15 minutes of execution does not bode well for a win. It’s a team that might be close offensively, but too many user errors are keeping this offense from putting it all together.

“I feel like that’s the case every week and it’s true,” Stevens said. “I personally, truly believe that if we can play a full game, not be perfect, but eliminate some of the mistakes that we are causing we can play with any team in the Mountain West. We didn’t play perfectly but we were still in the game. You don’t have to play perfectly against everybody.”

No, perfection is not necessary to win football games, but far too often on Saturday night, the CSU offense looked far from perfect. And perfection was almost not even needed to knock off the undefeated Broncos. Anything closer, and CSU had a chance to come home with the biggest win of the Bobo era.

“You play 60 minutes, and you see it every week when you watch games on TV, the teams that play for 60 minutes usually have a chance at the end off a ball game,” coach Mike Bobo said after the game. “I thought our guys did tonight. Guys stayed positive on both sides of the ball.”

The team fought hard for 60 minutes, but the whirlwind finish certainly made the game finish out a lot tighter than it was for most of the contest. It was a game that might not have even have had to come down to the final frantic minutes if the Rams could figure out how to string some successes together.

The Rams have 240 minutes left in the 2016 regular season. How many of those minutes can the team play like they want to?