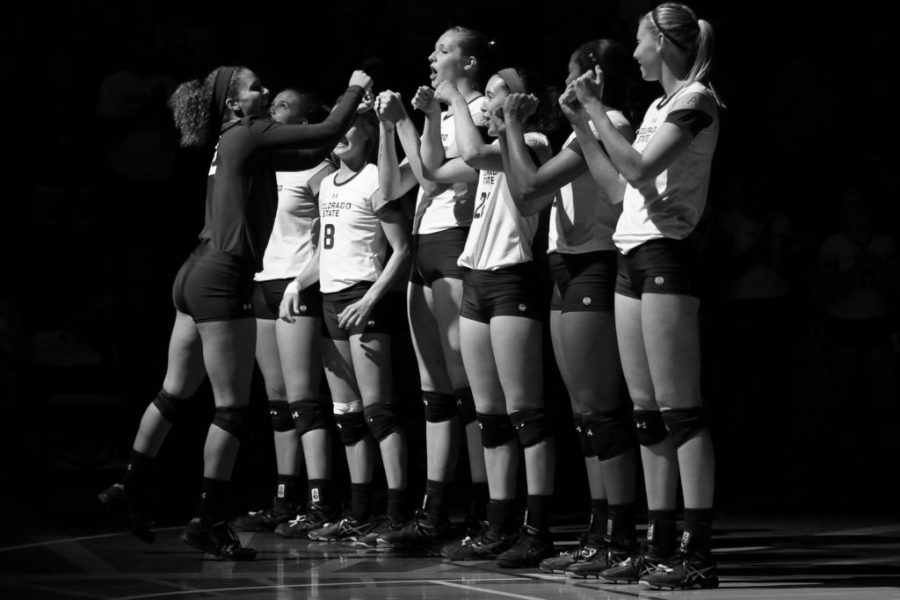 CSU Starters are announced prior to their game against Wichita State University. (Elliott Jerge | Collegian)

Cassidy Denny is easy to spot on the volleyball court. As the libero, she stands out as the one who wears the jersey that doesn’t match the rest of the team.

But perhaps it’s off the court where she stands out even more.

Of all the adjectives that could be used to describe Denny, quiet and shy do not qualify.

She is loud and she is outspoken. She speaks her mind, and won’t hesitate to boldly state her stance on something. She’s strong and articulate when she talks, and when she speaks about something she is passionate about, there is a whole lot of conviction behind it.

And if you don’t like what she says, or think it is a subject that a female student-athlete should not be discussing so openly, well too bad.

Because to be frank, Cassidy Denny doesn’t give a damn. She will be respectful, but will always remain true to herself and what she believes.

The Rams’ only senior has a personality as wide as the state of Texas, and brings enough energy wherever she goes to liven up the dullest of settings. And she can talk just as passionately and intelligently about the number of issues that black females in this country face today, as she can about what she saw from her opponents’ attack during a recent match.

What you see is what you get with Denny. There is not much sugarcoating with her, and there is a lot of honesty in what she says. But perhaps most of all, there is even more heart in what she does.

In Sacramento, California, she was raised as an only-child by a single mother, Chantele, who Denny considers her best friend. She claims to have had “third-child syndrome,” where the norm is to be loud to catch someone’s attention. To become more immersed socially, her mom enrolled her in a number of activities spanning from horseback riding to modeling.

“I was always involved in something,” Denny said. “I was always doing volleyball camps or some sort of camp. My mom was always saying ‘You never had siblings, so to get you socialized so you weren’t a brat I put you in a bunch of after school stuff so you could play with other kids,’” she said with a laugh.

The amount of activities might have helped, but really, the outgoing personality has always been there.

When she was younger she loved being around people and had no problem striking up conversation with anybody who would listen.

“She has never been reserved,” Chantele said. “She has always been very outgoing and very happy. She has always loved people and would just be happy with anybody. She would talk to anybody when she was a kid.”

Like almost every teenager, Denny put up a bit of a wall during high school, her mom said. But she has broken, maybe even smashed down that wall down while at CSU and has become very comfortable with who she is and what she believes in.

Perhaps this is most evident when she talks about her perspective as a black female living in this country right now. She frequently shares content on social media about America’s current race relations and the issues they present. And she has no qualms discussing these issues in her daily life.

As a student-athlete, or even a student in general, it might be easy to lay-low and not speak out on contentious issues. But not for Denny, the position she’s in and the platform she has to invoke change and start conversations is just too important.

“Being a black female, it is important to have a voice because a lot of times we are not given one and we are not allowed the space to have one,” Denny said. “Being a student-athlete, we are on a platform where other students look to us as role models. Having a platform to speak about these issues is really cool for me and that is one of the reasons why I take advantage of it.”

Not surprisingly, she has encountered some resistance from people who disagree with her point of view. Or some who think that she needs to pipe down, but she stays respectful and observant of differing perspectives.

“I think it just comes from people who do not understand or do not want to understand,” Denny said. “Or someone with a different mentality than me who maybe does not see my side because they were raised differently, or they just have a different perspective on the world, which is fine. I’ve been told I’m too outspoken or too loud. It’s mostly like ‘You are too loud for a girl.’”

And for those who think she is too loud for a girl, does she care?

“No, not at all,” she said with a grin. “If people think that then that is what they will think and I can’t really change that.”

The road to Fort Collins was an interesting, yet obvious one for Denny. There were a lot of parallels between Sacramento and Fort Collins, Denny said. And Chantele said that Denny was a high school senior who was eager to get out of state.

Volleyball obviously played a major part as well. Interestingly enough, Denny joined the team as a walk-on her freshman year, not on scholarship. But she worked her way into the rotation during the second week of the season and made 17 starts as a freshman. Fair to say, she was promptly put on scholarship the next semester.

The lure of Fort Collins also worked its charm. In the end, it seemed like a straightforward decision, even if that meant having to live a distance away from her best friend.

“I knew the minute we pulled into town that’s where she would want to go,” Chantele said. “She eventually went there, it was hard being further away…You’re never going to cut the strings of that relationship, but you do need to find a level of independence. She was so adamant about moving far away that when she got away it gave her a perspective about how much she appreciated home and family.”

‘Team Mom’ and an unbreakable bond

On the court, Denny’s job is to anchor the backrow of the defense as the libero. And as the lone senior on this year’s team, she’s also the undeniable leader. But that role, for Denny, involves a bit more than just pointing out the tendencies of opposing hitters to the other players.

Being the senior on a team with six true freshman, she affectionately assumed the title of “Team Mom” during the summer because she would do things like remind everyone to keep the locker room tidy.

But for some time prior to that, she served in a mom-like role for her closest friend on the team and roommate, Jasmine Hanna.

“I’ve always been Jaz’s mom,” Denny insisted. “The only time I’m not is at home because Jasmine cleans and does my laundry. Other than that I’m pretty much mom.”

“She’s mom to a lot of people too,” Hanna said. “But definitely to me, she gets me up for practice.”

The friendship between those two is truly one-of-a-kind. They are clearly on the same page. They can retell a story together with each of them chiming in details at exactly the right time.

And they have each other’s backs. While exiting the sometimes hazardous Hughes Stadium parking lot together after the football game last Saturday, an anxious driver was trying to impatiently squeeze their way into the lane where Hanna was driving. Of course they didn’t let the driver come over without waiting their turn, and the other driver was not thrilled about this. Words were exchanged, and luckily there was no real altercation, but if there had been, Denny and Hanna would have been in it together.

Hanna’s personality is the polar opposite of Denny’s, though. She’s quiet, reserved, and more closely guarded. Denny is one of the few people she has really connected with and opened up to.

“I’m not a super-open person,” Hanna said. “I like everybody and I’ll talk to everybody, but I don’t open up to a lot of people. I’ve always been kind of closed off and very businesslike. Having somebody that I can open up to and knows things about me that a lot of other people don’t know is comforting.”

They may be different in how they express themselves, but both Denny and Hanna come from practically the exact same backgrounds, which formed an instant friendship.

“We come from very similar backgrounds,” Hanna said. “I had siblings and she was an only-child but I think that’s the only difference. Our moms our similar, we were raised the same way. We get each other’s perspectives, Cassidy’s just a little louder in voicing it.”

Denny’s volleyball career is eventually going to come to a close at the end of this season. But she has big plans for the future. After graduation she has a keen interest in traveling wherever she can go. And not surprisingly, she’s considering becoming a lobbyist in the foster care and human sex trafficking sectors.

A pathway that seems fitting for a well-spoken individual with a great passion for advocating change.