Michael: Despite controversy, Rams can build off loss to Boise State 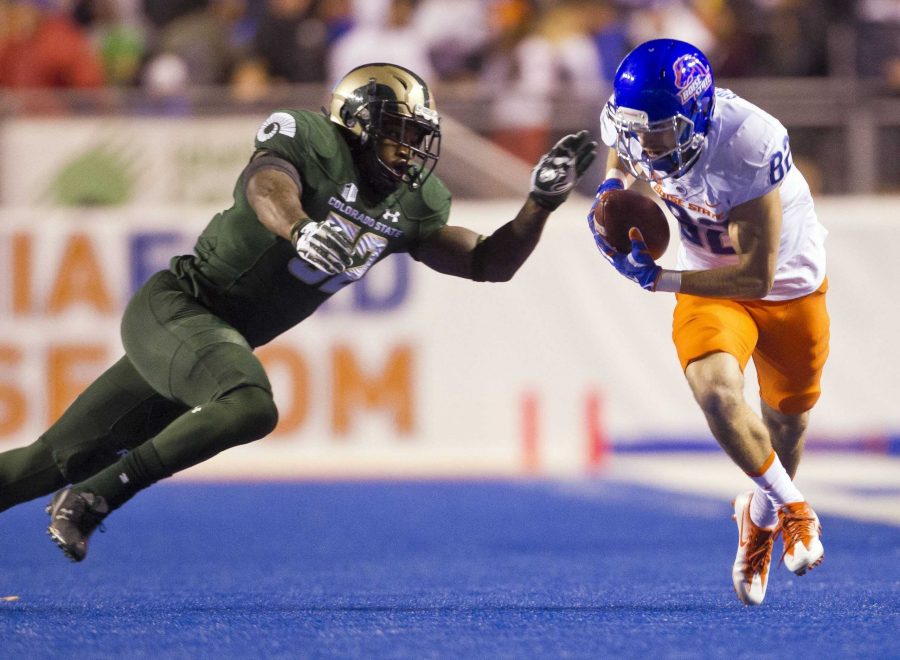 Colorado State’s matchup with Boise State Saturday night had to be one of the strangest football games I have ever seen. Between Hayden Hunt’s back-to-back successful onside kicks, the CSU offense seemingly turning on with a flip of the switch in the fourth quarter, or the lateral play that ultimately ended the game, that contest was a rollercoaster of emotions for Ram fans.

Legitimately, CSU outplayed Boise State in every quarter except the third, where the Broncos looked like the offensive juggernaut that we have seen all season. Broncos running back Jeremy McNichols finished the evening with 200 rushing yards, but over 50 percent of that came in the third quarter and was drastically skewed by an 80-yard touchdown run. The reality is the Rams’ defense played a pretty excellent game against one of the best offenses in the nation, and if it were not for the third quarter meltdown where CSU gave up three scores, this likely would have been the first victory over the Broncos in school history.

Even the offense, which struggled to put points on the board, did an excellent job keeping the Broncos off balance with the run game and not turning the football over. Where the Rams really hurt themselves was on third down. CSU converted just 3 of 14 third down opportunities, compared to Boise State, who converted on 9 of 16 opportunities.

Drive after drive, the Rams would get a little mojo going with the run game, but when third down rolled around, their inability to sustain drives resulted in a lot of missed opportunities to build a lead, despite the defense holding Boise to just seven points in the first half.

The biggest reason CSU struggled to sustain drives and convert on third down was the lack of rhythm in the passing game. It is very clear that this offense has lacked a passing threat since Colin Hill went down with an ACL injury and Nick Stevens is going to have to find a way to hit receivers down field to open up the offense in the second half of the season.

Stevens has a great football IQ and his decision making has been solid since returning to the role of starting QB. Stevens is not going to make the dumb throw that loses a team the game, but he also probably is not going to be the guy that elevates you to the next level either. He has the skill set and talent around him to succeed, but if CSU continues to run this vanilla passing attack, the offense is going to continue to struggle to score.

Stevens does not need to be John Elway on the field, playing hero ball and trying to do everything. All he needs to do is improve his third down efficiency and be more consistent with his delivery and this offense has already has the run game to produce points.

Looking at the way Stevens commanded the huddle and led the team down the field for multiple scoring drives in the fourth was a testament to his leadership. If Stevens completed the comeback, it would have been one of the most epic rallies in college football history, but if the Rams could have played a complete game, they would have put a lot less pressure on themselves in the first place and an excellent game would not have been left in the hands of the officials.

Down five and looking to take the lead, CSU got the ball back at their own 27-yard line with 15 seconds remaining in the game and no timeouts left. Stevens then dropped back and hit wide receiver Michael Gallup, who advanced the ball to the 32-yard line before pitching it to Robert Ruiz. After a couple of missed tackles the ball appeared to be fumbled out of bounds at midfield with about four seconds remaining.

After reviewing the play, the officials ruled that the ball was illegally lateraled forward before going out of bounds, resulting in a loss of down and a 10-second runoff, ending the game. Looking at the play repeatedly, it is tough to determine whether the ball was pitched forward or parallel, but the Mountain West has backed the official’s ruling.

My biggest issue with the call was the the play was ruled a fumble on the field and video replay did not definitively prove that a forward lateral occurred on the play. Even worse, the official came out and mumbled through his ruling, leaving everyone confused on what had just taken place.

For years we have seen inconsistencies from the officials and general incompetence out of the Mountain West, so when something like this takes place, it is tough to really trust those who hold the power in making the final decision. Would the Rams have completed the comeback? We will never know, because the game was ended with a subjective ruling.

It leaves a bad taste in my mouth knowing that the Rams fought all the way back, just to lose in heartbreaking fashion. That being said, there are a lot of positives to be taken away from Saturday night.

The Rams could have been content with laying down and letting the Broncos turn the game into a blowout after the third, but they showed for a second consecutive week that they are going to bring the fight until the last whistle blows and that is all you can ask for in a football team. Beating Boise State would have been monumental for this program, but there is still work to be done and goals to be achieved. After the last two weeks, I am not counting them out of any fight.