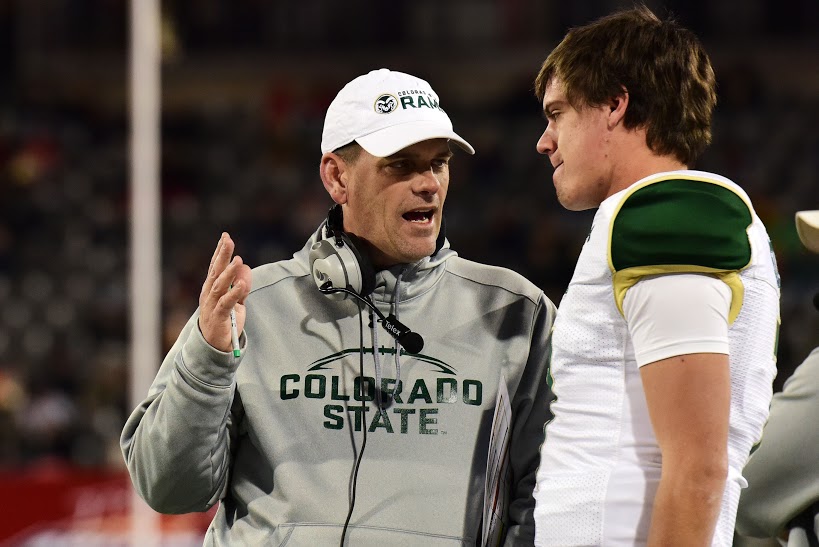 Coming out of Saturday’s 28-23 loss, the narrative for the Colorado State Rams was finding a way to play for the whole 60 minutes.

“(We have to) play at a high level for four quarters,” coach Mike Bobo said. “Sometimes we get confused when I say that, you might think that we are supposed to score every possession or we are supposed to get a stop every possession on defense. It’s just being more consistent and not having the lulls where we go a whole quarter and don’t convert a third down or defensively we go fourth straight possessions where they score four touchdowns. We can’t do that.”

The moments were there for the CSU offense on Saturday night. In the frantic fourth quarter, the offense put up three scores and more than half of it’s offensive production for the entire game (200 yards), but once again, it’s the little things that are preventing the offense to go out and execute for four quarters in a football game.

It’s not all about the Rams themselves, sometimes the other team, like Boise State Saturday night, executes better and wins one-on-one battles, but the challenge is to find the consistency needed to compete throughout a game.

“I believe we have guys that can win the one on ones,” Bobo said. “We just have to win them on a more consistent basis to play a complete game. Complete game doesn’t mean you dominate, you make plays. We did not make enough plays in that ball game.”

And it’s those little things that are holding the team back from playing that complete game. Whether it’s dropped passes on third downs or two point conversions, missing blocks on the backside that might turn two yard runs into twenty yards runs, or even a running back making guys miss in the secondary, the opportunities are there to make plays, they just are not happening on a steady basis.

Bobo pointed out Michael Gallup’s 53-yard touchdown catch in the fourth quarter as an example. Gallup’s simple assignment was to run the route and catch the football, once he did that, the Boise State safety overran the play, and Gallup was gone. But that play all comes down to what Gallup did first, catching the football.

Or when running back Izzy Matthews had to make a diving four-yard catch with the Rams facing third-and-six from their own 29 down by 25. Quarterback Nick Stevens scrambled for three yards on the ensuing fourth down to keep the drive alive, but if Stevens delivered the ball where Matthews could have made a play on it, Bobo said that Matthews could have presumably taken it for 40-yards.

Those kind of plays kept the Rams comeback alive in the fourth quarter, but it was the inability to make those plays that put the team in such a whole. The team finished the game 3-for-14 on third down, and at one point, punted on seven straight possessions.

“What they were told as an offense is that if they played for sixty minutes they would win the game,” offensive coordinator Will Friend said. “We dug ourselves too big of a whole in the third quarter. That was a frustrating, very disappointing game the way the third quarter was played out.”

The CSU offense made enough plays in the rain drenched first half to keep the game competitive, but once the skies cleared up in the second half, they were unable to make any plays to get in a rhythm and extend drives.

“It’s not effort,” Friend said about the not being able to make necessary plays in the game. “I’ll be the first to say I usually raise hell about effort but it hasn’t been about effort. It’s been doing the little things in the games we have won and that we have lost. You are not going to score every drive but, heck, you’d like to be able to get a couple first downs.”

The opportunities were there to extend drives and make the plays to keep this team in the ballgame, instead of having to make a flurry of them in the final ten minutes to make it competitive.

Competitive is good, and the coaches will take that, but still, they are not demanding perfection.

Perfection is not possible, but making routine plays and executing at a high enough level for all four quarters is.

“There has to be a happy medium in there for us to finish ball games and win and play complete game,” Bobo said.