Hunt going beyond the punt 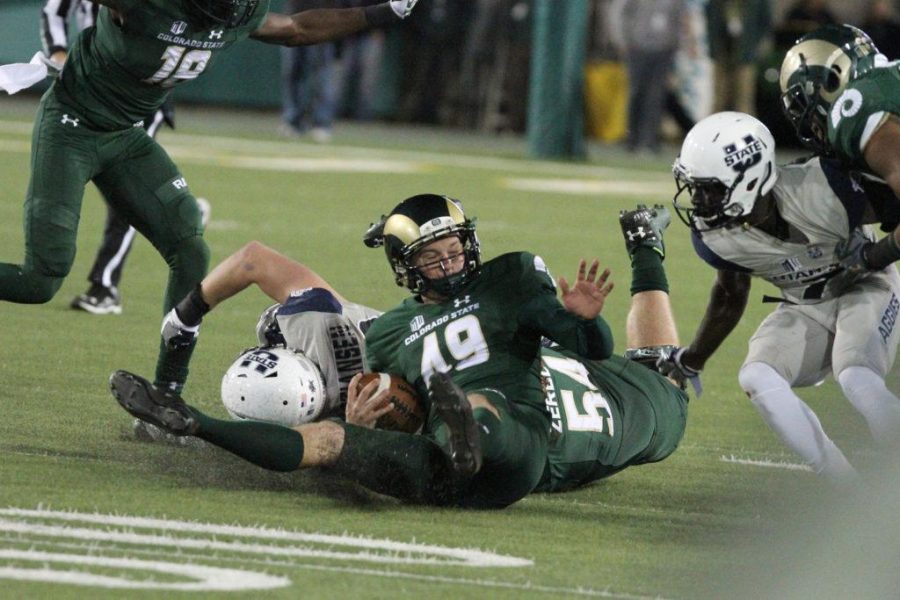 Coming into 2016, there were plenty of question marks surrounding the Colorado State football team. The punter was not one of them.

Everybody knows Hayden Hunt can punt. That’s what happens with a runner up finish for the 2015 Ray Guy award after a season in which he downed 24 punts inside the 20 while holding up a 46-yard average.

He has become known as “a weapon” because of what he is able to do in the field position game. It’s enough for a punter to stand out so much that he gets a nickname like that, but for a punter to have an impact on a season quite like Hunt has had this season, well, that’s unheard of.

Kicking wise, Hunt’s numbers don’t quite match last year’s output, but he is still one of the nation’s best. Hunt was named the Ray Guy punter of the week in the Football Bowl Subdivision for his effort last week in Boise when Hunt punted seven times for a 43.9-yard average and downed four of this punts inside the Boise State 20-yard line.

“His ability to punt and flip the field is always huge (in a) field position game when you are playing a team like Boise last week,” coach Mike Bobo said. “Being able to flip it constantly and pin them inside the 20. I don’t care how good of an offense you are, if you have to go that far you are going to usually make some mistakes.”

“The weapon” came into the game to help out his defense with his usual punting prowess, but it’s what Hunt was able to do at the end of the game that really stood out.

Recovering an onside kick is improbable and recovering two in-a-row might as well be impossible, but it’s exactly what the Rams were able to do on Saturday night because of Hunt’s foot.

“He went one of the best onside kicks we had ever seen on Friday,” Bobo said of Hunt practicing the onside kicks. “We usually practice it both ways, but he hit such a good one Friday that we were like, alright that’s it, go to the next drills. And then low and behold we have to kick two of them on Saturday.”

“Looking back at it now, I’ve hit a lot of those hits in practice and I have worked a lot on them,” Hunt said. “It obviously pays off when you put hard work. Like my dad always says, people aren’t lucky. The harder you practice the harder you work the luckier you get and it worked out that way.”

Hunt’s not ignorant, he knows a lot of things have to happen perfectly with the kick and after the kick to recover it, but he’s a guy who is pretty confident in his onside ability, and it showed on Saturday, when he almost single handedly put the Rams in a position to win that game.

The Rams would not recover the third one, and if there had to be a fourth one, well the team would be out of luck, because as Hunt said. “You never prepare to kick three onsides in a game, let alone four.”

The team just happened to have the right number ready to go on Saturday.

And then you add in the fact that Hunt is fourth in the team in yards per carry at 6.0, and leads the team in passing efficiency and completion percentage all of that production coming on fake punts.

For the year, Hunt is two-for-two on fake punt conversions. He said he’s been nervous on two punts in his life, his first punt in a bowl game and his first one at CSU. Those are easy for him. Fakes, not so much.

The pass came in the fourth quarter against Minnesota with the CSU offense desperately in need of a spark. Trailing 34-17 and facing fourth-and-five from the CSU 30, Hunt hit safety Braylin Scott over the middle for a 29-yard gain. The Rams would go on to finish that drive with a touchdown to pull within seven, but ultimately lose the game 31-24.

“The first one, throwing the ball I felt a lot more comfortable.” Hunt said. “All I have to do is fake the punt and throw the ball, it’s a five-yard dump pass.”

The run came with the Rams facing a fourth-and-six from their own 39-yard line trailing Utah State 21-10 in the second quarter. After picking up the first down, Hunt would have to come out later in the drive after the offense could not keep the ball moving. This time though, the Rams would go on to win the game.

Everyone knew he could punt, and Hunt himself had talked up his arm before this season started, but the run probably came as surprise to some.

“That was a little more sketchy for me just because of the design of the play where you know the punter is trying to outrun guys who run 4.3’s or 4.4’s (40-yard dash times),” Hunt said. “So that was a little different. It wasn’t the touchdown that we wanted to get but it worked out great. I was nervous as hell for that run play.”

“I’d be lying if i said I was not nervous for those two fakes just because it was a totally different situation,” Hunt continued. “I know I’m an athlete but when you are on the field with guys who are the athletes of athletes, it is a little bit different. Punting is fun, easy, no stress. Fakes are a little different.”

For the record, Hunt doesn’t know how fast his forty time truly is, he’s just hoping it falls under the five-second range.

But Hunt was a big story for the Rams coming into the season, and with that came Ray Guy expectations, yet somehow, he has been able to raise his profile even higher-pretty good for a kicker.

For Hunt, it was nice to get an opportunity to go out and contribute even more to the team. It was an opportunity he never got before. Hunt said that when former special teams coordinator Jeff Hammerschmidt was in charge, “he kept the fakes far away from me.”

Maybe Hunt’s just trying to show Hammerschmidt what he was missing out on in all of this.

And Hunt said he is not done. There are a few more onside possibilities, and “fake punts in the bag,” that just might be brought out at some point this season.

“I really enjoyed the opportunity that I have to bring a new element that can help our team win,” Hunt said. “I think it has helped our team win or just change momentum. (It’s) just a new weapon, a new type of thing that the other team has to look for than just a guy punting. I’ll take every opportunity there is to get our team in a better position to win.”

And, don’t worry, at the end of the day, he still wants to be the best punter in the country. That’s the priority.