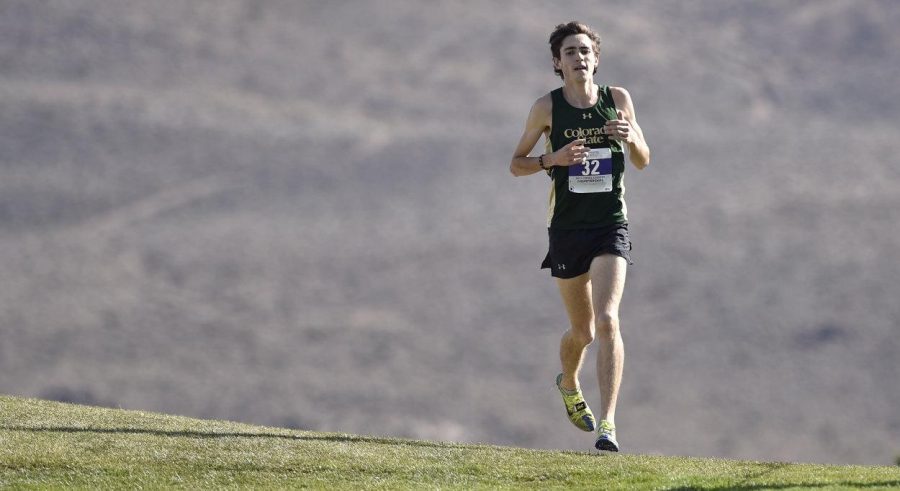 Jerrell Mock once again led the men at the do or die meet. Mock’s 23:57.5 8k time earned him second place out of 66 runners. After winning the race last year, he thoroughly battled to defend his crown.

Mock led the race for the first 15 minutes before colliding with Boise State’s Yusuke Uchikoshi and falling to the ground. Though he quickly regained his footing and responded by taking the lead at the 17 minute mark, Uchikoshi took the individual gold.

“It was unfortunate that Jerrell (Mock) went down right when he was about to make a move on the hill,” head coach Art Siemers said. “He never made an excuse, he got right back up and he didn’t feel sorry for himself. He responded right away and that’s what you ask from your leader – to be a champion in the face of adverse conditions. He took that slide, popped right back up and went right back to his gameplan. He didn’t waver from that; he still tried to attack the hills. That’s just the heart of a champion right there. That’s the kind of guy that he is. It probably just took a little too much out of him against really good competition.”

Mock has finished in the top two individually in the MW championships in back to back seasons. This is the first time a MW runner has done so since 2012 and 2013. He also was named first-team All-Mountain West for the second consecutive year.

As a team, the CSU men collected 48 points. Boise State won the meet with 41 points. The next four finishers behind Mock all earned second-team All-Mountain West honors. Anthony Laurita had a breakout performance. His time of 24:14.6 cracked the top 10 finishers, in ninth place.

“Since the race in Wisconsin, he has just trained like a beast the past two weeks and wasn’t afraid today,” Siemers said. “That’s what we’re going to need. If we’re going to get better and win future championships, we’re going to need walk-on athletes like him to come in and grind it out and help us get to the next level. It was a huge performance for Anthony today. Now he’s got to build on that in the next one.”

The Rams five All-Mountain West performers matches the 2013 team for the most in program history.

“Our seventh man was 16th in the conference – we almost had seven all-conference runners,” Siemers said. “That’s a special performance. Having depth is going to give us a big advantage, because it’s not typical that in all these big meets that your top five is always your top five. Even though we didn’t win today, it was a close battle and it doesn’t end our season. We still have regionals ahead and our goal is to finish in the top 10 at the NCAA Championships. These guys are capable of it and our pack will only keep moving up as we run in bigger meets and move to 10,000-meter races.”

Janelle Lincks led the Rams on the women’s side. She finished in ninth place with a time of 20:48.5 in the 6k. Her dominant performance earned second-team All-Mountain West honors.

Though the goal entering the meet for the women was to finish third or above, Siemers believes the Rams competed exceptionally.

“On the women’s side, it was our best race so far this year. Janelle (Lincks) has been our rock all year and made all-conference for the first time in cross country,” Simers said. “She moved up strongly throughout the race, and that’s her style – she likes to go out and move up. She made a good move at the end to move up from 13th to ninth. She just finished strong in her textbook way. Ali (Kallner) had a nice finish there at the end as well. McKenna (Spillar) had a great race. I think we’re putting it together and I think it’s going to be a great regional in two weeks.”

Next up the Rams will compete in the NCAA Mountain Regional on Friday, November 11. The meet will be held in Logan, Utah, home of Jerrell Mock.