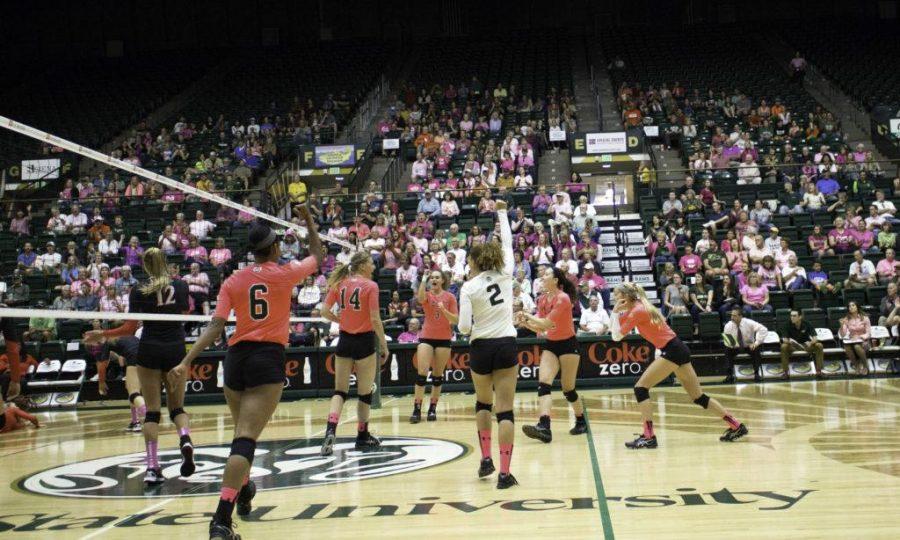 Two days after head coach Tom Hilbert notched his 500th career win as the head coach at CSU, Hilbert picked up career win number 501 as the Rams put together a very business-like 25-15, 25-21, 25-16 sweep of San Diego State in front of a pink-out crowd of 1,843 fans at Moby Arena on Saturday afternoon.

Just like win number 500, Hilbert appreciated it a lot more once match point was secured and victory was in-hand.

“I appreciate the people who talk about some of our milestones and accolades,” Hilbert said. “I really do. I’ll enjoy those once matches are over but during the match it’s about the same for me.”

A block party was held at Moby Saturday afternoon. As a unit, CSU compiled 10 total team blocks with Kirstie Hillyer leading the way. Hillyer got in on six blocks while Katie Oleksak and Sanja Cizmic also joined in on the fun, adding three more block assists themselves.

“We’ve been working in blocks a ton in practice this week,” Hillyer said. “We were preparing for their offense, which was tough, and I think that really helped us going into this game. We were able to have better vision on what they were doing.”

And in addition to the 10 total blocks, perhaps it was the sheer presence of Hillyer and company who were able to alter the Aztecs attack. San Diego State finished the match with 28 total attack errors, including 11 in the first set.

“That’s higher than their normal error percentage,” Hilbert said. “I would think our block had something to do with it. I don’t really care though, I just want to make sure we don’t make them (errors). If we play cleanly, that can frustrate a team and that also creates times where they get desperate and take wild swings.”

As has been the case for most of the conference season, the Rams were balanced on the attack. Jasmine Hanna led the way with 10 kills while Hillyer capped her big day with nine more. Cizmic added eight kills and Olivia Nicholson had six on 17 swings from the opposite outside spot.

One of the keys to this, Hilbert mentioned, is of course the widespread distribution of the ball. But when the two outside hitters are putting the ball into the ground on a regular basis, and setter Katie Oleksak is making crisp decisions, the outcome is favorable.

“I think we have balance,” he said. “And our two outside hitters always anchor that and they are the ones who are being consistent night after night.”

”Katie’s decision-making is pretty good,” Hilbert continued. “She’ll have some tempo and location issues which every freshman setter is going to have. But she’s making the right decisions and that’s what I’m really impressed by.”

For the most part, San Diego State never put a great deal of stress on the Rams. CSU led the entire way in the first set while taking advantage of the 11 Aztec attack errors.

The second set was more competitive, with six ties and four lead changes. But CSU made plays when it needed to in the end-game. With the second set score at 20-19, the Rams ran off five of the next seven set points to clinch it, aided by two San Diego State attack errors and punctuated by a set-ending kill by Hanna.

CSU hit .600 and cruised in the third set to complete the sweep.

The Rams, who swept Nevada on Thursday night remain an unblemished 7-0 in conference play and in the driver’s seat of the MW conference race. But with 11 matches still remaining, there’s no time to ease the foot off the gas pedal.

“We’ve been doing the right things up to this point,” Hilbert said. “We’re preparing well, we’re going out and playing consistently. It’s a job that you have to do every day. The more we get in the driver’s seat, especially on the road, the more comfortable those teams are going to be because they play as the underdog. We are going to get the best out of everybody we play.”

CSU will head out on the road next week to take on San Jose State on Thursday at 7 p.m. MT.