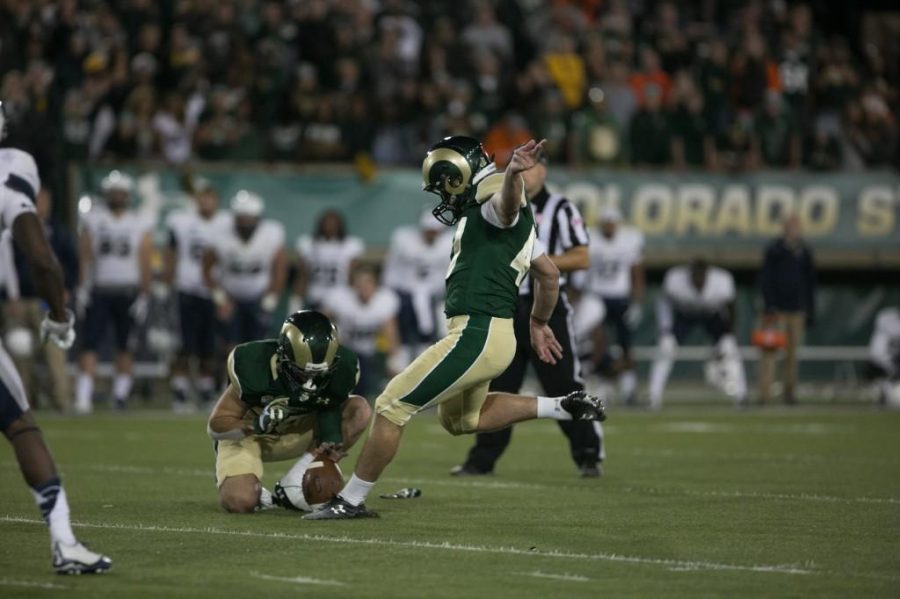 The kicker knew it was good the second he hit it. The 32,500 plus in the stands knew it too. And as the sellout crowd poured onto the field to celebrate with game-winner Jared Roberts and the rest of the CSU team, for one night, one thing was for sure: Hughes Stadium was alive.

It was Oct. 18, 2014, in Fort Collins. The Rams were rolling, and the Utah State Aggies were coming to town for homecoming.

“There was a great buzz, it was (coach Jim McElwain’s) third season so things were really starting to click,” Roberts said.

The Utah State game marked the third big rung on the ladder for the 2014 team. The first one was the Rocky Mountain Showdown with the University of Colorado Buffaloes. A 31-17 victory in that game set the tone for the season, but the Rams were disappointed one week later in Boise, Idaho when they lost to the Broncos 37-24.

When quarterback Garrett Grayson hit wide receiver Charles Lovett for a 12-yard touchdown with just over a minute left in the fourth quarter to beat Boston College 24-21 in Boston one week later, the Rams climbed the next big rung.

After that, the team railed off three straight wins, but against fairly soft competition.

“We could kind of start feeling the buzz in Fort Collins,” Roberts said. “But the fans, they still wanted to see if we were for real.”

The Utah State game was the most highly anticipated game at Hughes Stadium in a decade. It had been 10 years since the last sellout at the Stadium with the 2004 Border War.

Hanging out in the Embassy Suites hotel before the game, the players got word on just how many of those fans were turning out to see this team.

“It started trickling through that we thought it was going to be a sellout,” Roberts said. “Everyone was really excited, we were 5-1 and already having a good season but that was a big game for us going into it. We were really excited and had another good opportunity to get where we wanted to be for that season.”

The Aggies came in 4-2 and undefeated in conference play. It was a Mountain West clash between two teams vying for position in the Mountain division.

The Rams may have already lost to Boise State, but the Broncos lost to Air Force a couple weeks after the CSU win. CSU was fully in the championship race, and they knew it.

They also knew how good of a team Utah State had. After all, the Aggies shut out the Rams en route to a 13-0 win in Logan the year before.

“I think for conference play, we put Utah State right up at the top just because it is a very competitive school,” wide receiver Elroy Masters, a redshirt freshman in 2014, said. “We get amped for this game, and two years ago it was a battle literally to the end.”

The game would turn out to be everything that it was advertised and more.

On CSU’s very first play from scrimmage, Grayson hit sophomore wide receiver Rashard Higgins over the middle who bounced outside and almost tight-roped into the end zone before he was finally pushed out at the Utah State 6-yard line after a gain of 69-yards. Three plays later, running back Dee Hart scored from a yard out to give the Rams the early lead.

It was supposed to be a defensive slugfest between two of the better defenses in the conference, but from the start, it did not look like it was heading that way.

“We knew Utah State had a great defense and we were kind of expecting a defensive battle,” Roberts said. “But then it was like, gosh you know, maybe this won’t be a defensive battle. But that’s just football, a game can switch just like that.”

And it did switch just like that. After the CSU opening drive, an Aggie touchdown and second quarter field goals from each team were the only points scored until the fourth quarter.

It was the seesaw defensive battle as advertised. On the day, Grayson was sacked eight times, and going into the fourth quarter, the Rams had only put up 172 yards of offense.

The teams also combined for 12 punts heading into the fourth quarter, and Utah State was playing with its backup quarterback, Craig Harrison after starter Darell Garretson was injured in the second quarter.

On the ensuing Rams drive, Roberts missed a 47-yard field goal that would have knotted the game.

“I just remember obviously being devastated about that and just praying that I would get another opportunity,” Roberts said.

But Roberts did get another chance. On the next CSU possession, Roberts capped off a 12-play drive, when he hit a 46-yard game-tying field goal with 1:50 left in the game.

“I just remember feeling grateful, that one, I had shot to redeem the miss, and just two, that I had to hit it and how much we put on the line for the season,” Roberts said. “I just remember Joe (Hansley) who was the holder at the time saying hey you got this you can hit it, and then yeah obviously hitting that one to tie it and then the crazy events afterward.”

The crazy events afterward will live on forever in CSU lore.

The Aggies got the ball back on their own 26-yard line with 1:40 left in the game, and after a 15-yard Aggie run on first down, the Rams forced three straight incompletions. The ensuing Aggie punt pinned the Rams at their own 12-yard line with 50 seconds left.

That’s where Grayson led the Rams out for their last drive.

On the first play from the 12, running back Dee Hart took a handoff for three yards. It looked like the Rams were content running out the clock and going to overtime. But on second down, Hart broke through the line and got the ball all the way out to the 32-yard line. Once the Rams hit the 30-yard line, the whole game plan changed, and now, they were in a position to take a shot.

“We were running out the clock and were planning on going into overtime, so he had the long run, changed everything up, we called a timeout, came up with a good play,” Grayson said after that game.

The Rams had a designed play call for that situation once they got the ball to the 30-yard line. But they were only going into “mayday” mode once they hit that yard line. CSU was not going to risk anything inside their own 30.

Had they not had the big run from Hart, the game likely would have gone to an extra period.

But on that last drive, there was never any doubt from the CSU players.

“We are going to try and go for the win, there is not really much conservative in our team,” Masters said. “We believe in our players that we are gonna go out there for the win.”

Roberts said that its so hard to tell about whether the team was going out there to truly win the game or avoid a mistake deep in their own zone, but in the end, it came down to trust.

“I think it showed a lot of confidence in where we came from,” Roberts said. “Maybe Mac’s first year he plays for overtime, but I think it was really a testament looking back on it to how much we earned his trust and respect. For him to know that the defense got the stand, and it was trusting Garret and the offense to go out there and go for it.”

And the Rams did go for it. After the Hart run, Grayson took the snap from his own 32-yard line and threw up a bomb to Higgins, who made a sliding catch between three Aggie defenders. The 46-yard gain put the Rams down on the Utah State 22-yard line with 11 seconds left in the game.

It was a pivotal connection between two of the best players in CSU Rams history. Once Grayson put the ball in the air, there was never any doubt on who was coming down with it.

“I’m not going to lie, when I stepped back and I was like Rashard kind of got inside a little bit and I was just excited when the ball was in the air,” Masters said. “I just had belief in our receiver that he was going to go and make the play.”

From the moment the drive started, Roberts had the belief that he was going to be called on to win the game. The offense would give him a chance. He could feel it.

“How we came back and won that game at Boston College, It was just kind of one of those magical seasons where you felt anything could happen at any time,” Roberts said. “Looking back on it, I was just thinking be ready, be ready, and luckily it came.”

As Roberts trotted out with five seconds left to attempt the game winner, Utah State coach Matt Wells used his remaining two timeouts to try and ice the kicker. Roberts had plenty of time to think.

“I just remember taking it all in,” Roberts said. “I was just kind of looking around. There’s a lot going through your head at that time obviously. I just really remember thinking, ‘wow,’ ya know? How far we had come as a team in five years. Looking around at a sellout crowd and thinking back to those games our first couple years, how it felt like there were a couple hundred people in the stands honestly.”

“Obviously as a kicker, those are just kind of the moments you dream about. It’s kind of surreal still. To think back to the moment, it still gives you chills,” Roberts continued.

A CSU false start penalty that was not without drama of its own pushed Roberts five yards further back as he now lined up for a 46-yarder for the win.

But, the two timeouts and the false start did nothing to phase him. He knew he hit a walk off the second his right leg struck the ball.

As Robert’s kick sailed through the uprights and the clock hit all zeros, the Colorado State players, and then the fans, stormed the field to celebrate with him.

It was a 16-13 last-second win on homecoming in front of a sellout crowd. Wins like that do not come around very often.

“It’s a moment you never want to end. It comes and goes so fast,” Roberts said. “Looking back on it, it just felt like it was all over so quickly. It’s such a rush of emotion and you know you put so much into the season both in the offseason and through the season and it’s those moments that make all the work worth it.”

“It was awesome, it was something you will remember for the rest of your life,” tight end Nolan Peralta, a sophomore on the 2014 team, said. “Those games don’t come around too often. It was an awesome experience for us and I know anyone who was there will say the same thing. We are building memories out here playing. That was a great one we will always remember.”

The ending would not be all fairy tale. The CSU magic would run out in Colorado Springs in the last game of the season when the Falcons edged out CSU 27-24 with a last-second field goal of their own.

There would be no Mountain West championship. CSU would not even end up getting a bowl win to cap off the 10-win season.

But for one night in Fort Collins, the Hughes Stadium magic was back.