Stevens not concerned with obstacles, critics heading into 2016 season 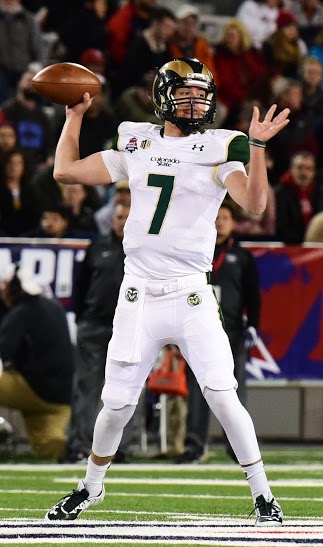 In 2012 former Colorado State quarterback Garrett Grayson was named the starter heading into his sophomore season. On Sept. 24, 2013, he was injured in a game against Air Force, bringing an end to his season.

Grayson came back from injury in 2013 to start all 14 games the Rams played and put up one of the best statistical seasons a Colorado State quarterback has ever had, becoming just the fourth ever 3,000-yard passer in CSU history and leading CSU to a win over Pac-12 member Washington State in the Gildan New Mexico Bowl.

Current CSU quarterback Nick Stevens redshirted in 2013, becoming eligible to play in 2014. The Rams had just finished a successful campaign under head coach Jim McElwain and seemed to have found a quarterback in Garrett Grayson to lead the team into the future. Colorado State fans should have been thrilled with the outlook of the program, and most were, but many called for redshirt sophomore Nick Stevens to start ahead of the man who just put up one the best seasons in CSU’s quarterback history.

“I think (fan criticism) happens with everything. It probably doesn’t happen as much if your team is going undefeated, but there are always people that are going to want change.” Stevens said while speaking about why he felt fans might have wanted that change.

Having Stevens take over for Grayson probably never crossed the mind of coach McElwain, but there was a fan call for it. Benching Grayson in 2014 almost seems blasphemes now, as he went on to have the single greatest season in CSU history, completing 64.3 percent of his passes for 4,006 yards, 32 touchdowns while throwing just seven interceptions en route to being named the Mountain West Offensive Player of the year on a CSU team that finished 10-3.

Stevens saw the field in five games in 2014, but wouldn’t see real action until 2015. He said he did hear some of the calls for him to play over Grayson, but it went in one ear and out the other, never letting it consume his thoughts

“I don’t think it’s that hard to block it out,” Stevens said. “It’s a lot different when you’re sitting in the locker room, you’re out there on the practice field. You can see everything that’s going on and the rest is just kind of outside noise. It happens in every situation on every team, so I try not to take it too personally.”

It is one thing to want the team to go undefeated every year; it is another to realize what is best for the team.

“Everything worked out perfectly for Garrett (Grayson). He’s in the NFL now getting paid. I’m not worried about it at all and try not to pay too much attention to it.”

Jim McElwain departed for the University of Florida following the 2014 season, making room for current head coach Mike Bobo to take the helm. That left Stevens heading into his sophomore season with a new offense to learn in a season where he was the heir apparent to Grayson.

The transition to a new offense opened up a quarterback battle, as all the players were starting at square one and had no more experience than the guy standing next to them.

Stevens and then redshirt freshman Coleman Key topped the depth chart to start the season and embarked on a quarterback competition that lasted into the second week of the season. Stevens was able to separate himself from Key, being named the lone-starter for the Rocky Mountain Showdown and rest of the season by week three.

Once he became the lone-starter in 2015, it became an up and down season, with CSU finishing 7-6 and losing in the Nova Home Loans Arizona Bowl against Nevada.

Stevens finished the season throwing for 2,697 yards and 21 touchdowns. His 2015 yardage totals ranked second in the Mountain West and set a CSU record for the most passing yards by a sophomore, helping him earn a spot on the All-Mountain West second team.

Heading into 2016, Stevens has found himself in a similar situation to what Garrett Grayson went through in coming into 2014. He has played one full season, and played well, yet still hasn’t secured his starting spot. Instead, graduate transfer Faton Bauta and freshman Collin Hill have joined Stevens on the depth chart for a three-horse quarterback battle heading into this year’s Rocky Mountain Showdown.

In the same way he treated the rumors of himself starting above Grayson, Stevens tries not worry about losing his starting spot.

“If you get frustrated with it, it’s going to take away from your performance,” he said. “So I just looked at it as an opportunity to prove myself and improve myself. I think it really helped me out a lot this year and I think that the strides I’ve made since I’ve been in the competition have been really helpful and really positive.”

“We brought guys in during bowl practice and it was very eminent to Nick (Stevens) and J.C. (Robles) that we were actively trying to recruit a veteran quarterback,” head coach Mike Bobo said. “I’m always talking about competition to the team and to that room. Even to guys when they’re watching practice to after we signed Faton (Bauta), when he came on campus, Nick hadn’t blinked an eye. He concentrated on what he needed to concentrate on and that’s himself.”

Bringing in a new quarterback to potentially take your place when you started the year before can be a hard thing to cope with, but Stevens has listened to his coach, and not tried to be anything other than himself.

“We talk a lot about in that room about ‘control what you can control’ and the only thing he can control is how he goes about his business every single day, and he’s done a nice job of that,” Bobo said, speaking about how Stevens has handled another quarterback competition. “Like I told all of them: I appreciate the way they compete and how they go about their business, I appreciate how they treat each other and I appreciate how they’re there for the team and Nick is a very good example of that.”

In the midst of a battle, Stevens and his peers have not let the possibility of starting cloud their judgment of what it means to be a part of the Colorado State football team. When you are competing against the name next to yours in the locker room, tensions can rise. That hasn’t been the case in the CSU room.

“If you want it to (affect your relationships), sure. The type of person I am, the type of person everybody in our room is, we don’t have those kinds of guys,” graduate transfer Faton Bauta said. “Have I seen those kinds of guys? Yeah, for sure, but that’s not going to affect their relationship with me. That’s football, and then there is real life outside of football. So if you want to ruin that, and be in that sort of light with those people, that type of relationship, that’s fine. In our quarterback room? No. We know we’re challenging each other and I think we’re enjoying it at the same time.”

When you have a group full of people competing for what is best for the team, rather than competing for what’s best individually, it creates an atmosphere where the team thrives. If it begins to thwart relationships, the team loses.

“We didn’t know each other so much before, but showing up a little bit early to meetings you get small talk going and talk about daily life and things other than just football,” Stevens said about his relationship with the other quarterbacks while going through a competition. “After each play we’ve kind of grown into the ability of coming up and saying ‘what did you see on that, would have thrown it where I threw it’ and our competition has kind of grown into a positive correction based thing. We’re not wanting each other to screw up, we want the offense to look good out there. It’s definitely a healthy relationship, healthy competition and we’ve just grown more together as it’s gone on.”

Coach Bobo has not named his starting quarterback heading into the Rocky Mountain Showdown, but redshirt junior Nick Stevens has been through it all at Colorado State and not changed his approach. The Nick Stevens motto: control what you can control.