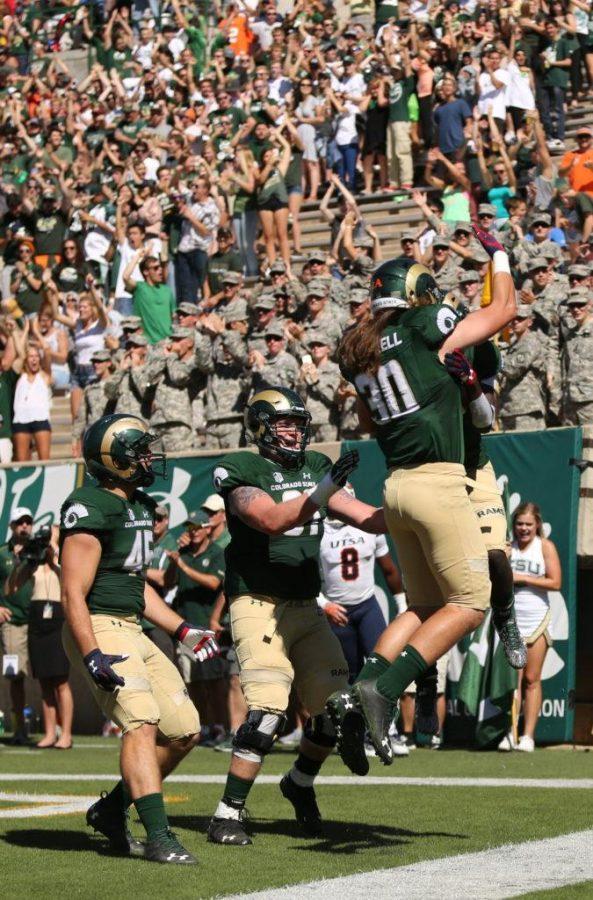 The Rams celebrate a first quarter touchdown during the game against UTSA on Saturday afternoon at Hughes Stadium.

The Colorado State Rams and the University of Northern Colorado Bears will face off for the 21st time when they take the field at Hughes Stadium on Saturday afternoon.

When it comes to the series, the Rams have the Bears in a stranglehold with an all time record of 19-0-1. The lone tie of the series took place back in 1899, the second ever time the Bears and the Rams faced off. Each team only mustering up five points.

The series itself dates back to 1893, the year that both football programs were founded. UNC was only the fourth school CSU ever played.

Although the distance between Fort Collins and Greeley is only a measly 30 miles, the two teams haven’t been regular opponents since the 1940s.

Both CSU and UNC were originally members of the Colorado Football Association, one of college football’s earliest conferences. As the name suggests, the conference was home to all of Colorado’s college football teams from 1890 to 1908. After the league dissolved, the still existing Rocky Mountain Athletic Conference was born.

Colorado State was a member of the CFA from the program’s birth in 1893 up until 1902 when they decided to go independent.

CSU joined the Rocky Mountain Conference in 1910 and UNC followed in 1923.

The beef of the history between these two teams came between 1924 and 1945. The Rams and the Bears faced off 12 times in the 21 year span.

Saturday’s game will be the fifth meeting between the Rams and the Bears since 1977.

The Rams defeated the Bears 48-10 in the 1977 matchup, CSU’s largest margin of victory in the 20 times they’ve played against UNC.

Excluding the tie, the Rams’ smallest margin of victory came in their 6-5 over the Bears in 1905.

In the 20 meetings, CSU has shut out UNC six times with the last shutout coming in 1945. The Bears have never scored more than 20 points on the Rams. The only time the Bears have scored 20 points came in their 41-20 loss in 1983.

This will be the first meeting between the two teams since 2011, a game in which the Rams defeated the Bears 33-14.

The Rams have been able to keep the Bears in check up until this point, but the 2016 UNC Bears have already shown that they have the ability to put up some points.

The Bears have scored at least 55 points in both games they have played in this season.

Even for an FCS school, UNC’s high-powered offense could give CSU some trouble and the Rams know it.

“Number one you respect everybody that you play,” head coach Mike Bobo said. “They’re very, very dangerous. They’re putting up points. They’re playing fast. They’ve got two of the best returners that we’ll face all year.”

No matter what the outcome is, it seems only fitting that one of the final games at Hughes Stadium is against a school the Rams have played off-and-on since 1893.

Collegian assistant sports editor Colton Strickler can be reached by email at sports@collegian.com or on Twitter @coltonstrickler