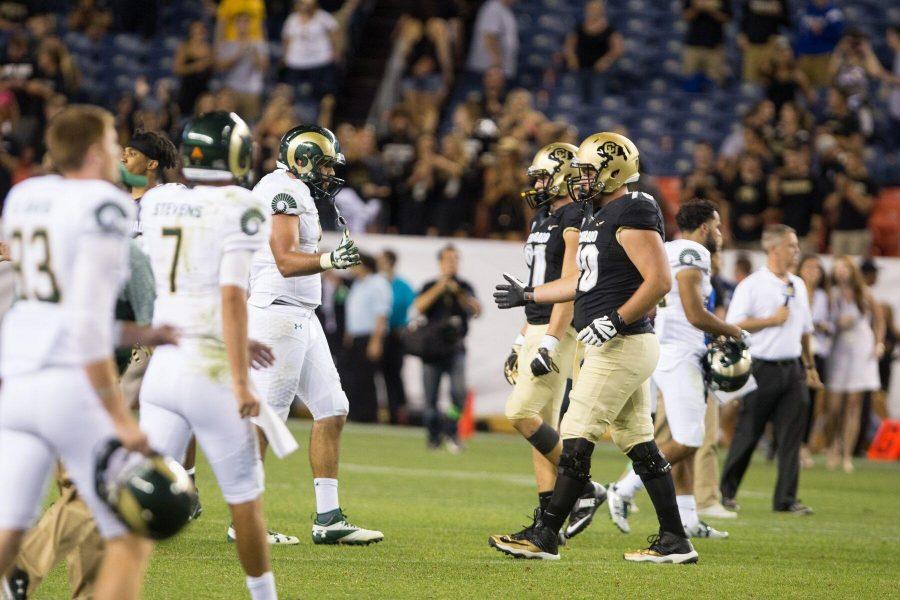 It was 60 minutes of agony for Colorado State, as Friday night’s Rocky Mountain Showdown quickly turned into a one-sided affair.

On their way to a 44-7 victory, the Buffaloes scored touchdowns three out of the first four times they touched the ball, sparking empty seats to appear in the CSU fan section just as soon as it filled up.

Who the starting quarterback would be for the Rams was answered, as redshirt junior Nick Stevens took the field first. Stevens would go on to finish the game an abysmal 6-20 for 31 yards and two interceptions for a 23.0 QBR and be replaced by graduate transfer Faton Bauta late in the 3rd quarter.

Bauta finished the game six for nine, throwing for 32 yards and one touchdown.

“That wasn’t our best showing,” Stevens said. “This wasn’t the team you’ll have to se the rest of the season, unfortunately it was tonight. We just have to come back, rebound, and try to get a win next week.”

The young CSU defense was quickly overwhelmed by the CU offense, particularly by junior running back Phillip Lindsay and senior quarterback Sefo Liufau.

The Rams opened up with six straight three-and-outs on the offensive end. The opposite can be said for CU, as the Buffs jumped out to a 31-0 lead by half and the rout was on.

The bleeding slowed down in the second half, but CU was still able to move the ball with relative ease.

After seeing the deficit extend to 37-0 from two field goals by CU kicker Diego Gonzalez to start the second half, graduate transfer Faton Bauta entered the game in place of Nick Stevens. Bauta led the Rams on a 10 play, 65-yard drive, capping it off with a 5-yard touchdown pass to sophomore Marcus Wilson, finally giving Ram fans something to cheer about as CSU put up their first points of the game (37-7).

Senior quarterback Sefo Liufau proved too much for the Rams young defense to handle. Liufau finished the game with 318 yards, 248 of which came in the first half where CU out gained CSU 364 yards to 79, and one touchdown. Junior running back Phillip Lindsay also gave the Rams trouble, as he rushed for 96 yards on 20 carries and two touchdowns.

Colorado dominated an inexperienced Colorado State team from start to finish, leaving the 88th Rocky Mountain Showdown victorious by the largest margin of victory since 1956, 44-7.

“I’m terribly disappointed and embarrassed by the showing of our football team tonight,” Bobo said.