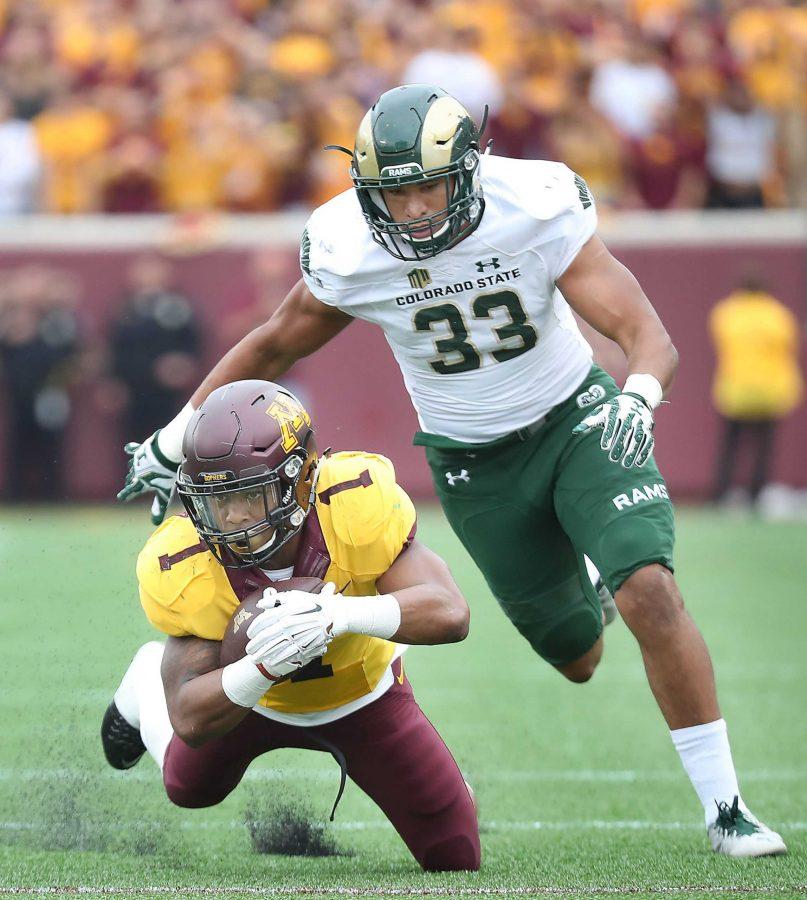 MINNEAPOLIS- Coming out of the week one 44-7 loss against the University of Colorado, the Colorado State football team was defeated on the scoreboard and in spirit.

On Saturday against the University of Minnesota in Minneapolis, CSU was defeated on the field, 31-24, but it was a much different looking loss than week one.

After the CU loss, CSU was left as a program looking for answers in every aspect of the game. Coming out of Minneapolis, CSU still has its obvious question marks, but CSU had every opportunity to win this game.

They will be kicking themselves over missed opportunities and miscues that cost them in this close game, but as the naked eye and the CSU team suggest, this is an improved football team.

“Honestly I think it’s night and day,” safety Jake Schlager said of the week-to-week improvement. “That first week was rough, and if we would have played tonight the same way we played in week one nothing would have been this close.”

No, Saturday’s game would not have been this close if CSU came out and put up the same effort as they did week one.

Offensively, the team is light years ahead of where they were in week one. They have a quarterback that can move the ball accurately down the field, and rushing game that burned up the stout Minnesota defensive front at points throughout Saturday’s game.

The team put up 369 yards of offense against a Big Ten opponent on the road and put themselves in a position to win a close game.

The offense did not play its best game. They turned the ball over two times, and left plenty of big plays on the field in missed passes, but after the week one anemic offensive output, a seven-point road loss to Minnesota seemed inconceivable.

The offense missed opportunities on Saturday, but it is the defense that is going to have to shoulder much of the defeat. Missed tackles and another very poor third-down defensive game undid the Rams’ chance at victory on Saturday.

Minnesota finished the game 7-13 on third down, good for a 54 percent conversion rate, which just happens to be right at CSU’s defensive average for the season. Heading into the game, CSU was ranked 124th in the nation in third-down efficiency, and after Saturday, they could drop even further.

“You have to start emphasizing third down, third down percentage we are horrible,” safety Jake Schlager said. “Every single week we harp on that but I don’t think we have really taken that to heart yet. We had so many opportunities to get off the field especially earlier (in the game).”

As the missed tackles piled up, Minnesota continued to pile on rushing yards, finishing the game with 243-yards on the ground. It was the little things that hurt the Rams in the game, and even just a few more plays out of the defense could have completely swung the game, but again, it was not the same defense that got rolled by CU week one.

The CSU defense looked helpless against CU. They were consistently out of position, and they did not have any answers for the Buffs’ offense. This week, Schlager said the team was in position to make plays, they just could not follow through on the little things.

Saturday’s game was supposed to be the ultimate aptitude test for this CSU team to show just how far they had come since the week one loss. Clearly, this team made way too many mistakes for anyone to say that they passed the test.

But, they went into a hostile environment against a power-five opponent and had every chance to win the game. It was a loss, yes, but a loss that came nothing like three weeks ago.

“It gives everybody confidence,” Schlager said. “Yeah, it hurts to lose, especially in that fashion coming down right to the very end. (But) we know what we have, we know that we can play and we know that there are some places to go.”

How far they go just depends on how much they can learn from what let them down on Saturday.