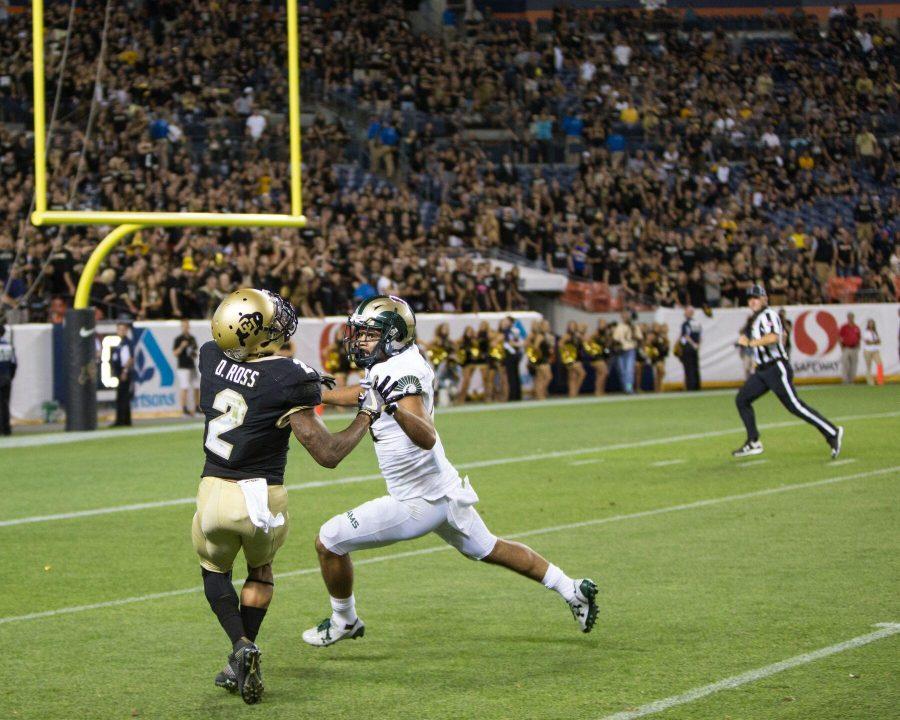 The Colorado Buffaloes came out fast in the Rocky Mountain Showdown and the Colorado State defense had no answer.

From the very first play of the game, the Buffs offense put the Rams on their heels, and before the stands even began to fill up, CU had already put three touchdowns on the board.

Coach Bobo expected the buffaloes to run some up-tempo offense, but CSU did not look ready for the high-speed attack the Buffs employed at the start of the game.

“It was extremely fast tonight, we couldn’t settle down defensively,” coach Mike Bobo said. “We couldn’t get them into third downs and when you are a no-huddle team and you are getting first downs on first and second down, it allows you to go a lot faster.”

“We kind of talked about it during the week that they do have that tempo every once in awhile,” linebacker Kevin Davis said. “(We) just got to line up, get the signal and play.”

But the Rams were not able to line up, get the signal, or make plays when CU went fast to open the game. It was a tempo that coach Mike Bobo and the players said they prepared for, but CU’s speed and efficiency stunned the Rams early.

Davis said that some of the mistakes could be attributed to the inexperience on the defense, but at the end of the day, they just had a bad day.

CSU often looked out of position in the early parts of the game, and they struggled to counter CU’s stretch-the-field horizontal play calling. The Rams defense did not have the speed to contain the Buffaloes, who controlled the boundary for much of the first half.

On CU’s second touchdown of the game, CSU cornerback Tyree Simmons was left on an island against two CU receivers and Liufau took advantage, hitting Devin Ross for a 17-yard touchdown on a screen pass. It was the kind of miscue that marked the first half for the Rams.

Colorado’s offensive line consistently pushed CSU’s defensive line off of the ball as the game opened up, and running back Phillip Lindsay gashed the Rams early, running for 66 yards on 11 carries in the first quarter alone. Lindsay’s production opened up the field for Sefo Liufau who capitalized on big plays throughout the first half.

Liufau hit Shay Fields, who badly beat Simmons, for a sixty-yard ball in the first quarter, and connected with Bryce Bobo for a 46 yard gain late in the half. Both plays led to one-yard touchdown runs by Lindsay.

For much of the game, what CU wanted on offense, they got it.

And when CU scored, they scored fast. All of CU’s four touchdown drives in the first half came in three minutes or less. Three of them lasted shorter than two minutes. It was a quick hitting, efficient CU attack, and it took far too long for the Rams to respond.

By the time CU stepped off of the Gas at halftime, CSU allowed 374 yards and 16 first downs.

CU’s effectiveness on first and second down in the first half killed the Rams on defense. The Buffs only faced three third downs in the first quarter and converted two of them. The Rams could not get CU out of any sort of rhythm in the first half.

The defense did slow down the game in the second half, and only gave up thirteen more points, but by halftime, it was too little, too late.

The early assault at the start of the game was too much for this young defense, and this young team to overcome.

“We have been practicing it all week, and we were ready for it, but we weren’t at the level to just play with them today,” defensive lineman Jakob Buys said. “They just got the best of us today. We weren’t really completely prepared to be able to run against that high of a tempo.”