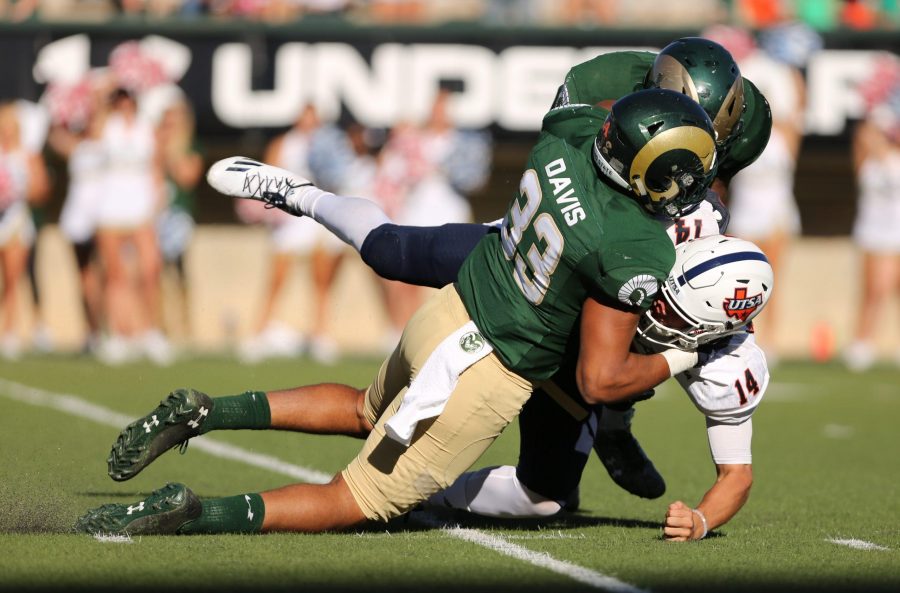 In week-one, the Colorado State Rams defense did not do much of anything to help the team in their Showdown with the University of Colorado Buffaloes.

In week-two, the Rams defense was called on to do everything in the team’s 23-14 win over the University of Texas-San Antonio.

“Defensively, I thought we played a heck of the game,” safety Jake Schlager said. “We came up with a bunch of big time stops and just picked up the slack for the offense in the second half. I couldn’t be more proud of this group.”

It was a concerted confident effort out of this young Rams defense, a week after getting embarrassed in the Rocky Mountain Showdown.

“I was extra proud of our defense,” coach Mike Bobo said. “Last week we couldn’t slow CU down, and to come out today and not worry about last week all they were focused was on today (and) each assignment. Even when we give up a first down we bowed our neck and we continued to play hard.”

This game started out much like the Showdown did, as UTSA marched down the field and scored a touchdown on their opening drive as quarterback Dalton Sturm stung the Rams on four third-down completions.

But, the defense’s response to a game-opening touchdown from the opposing team was much different this week than it was last week.

“This week we didn’t panic at all. We went back and talked it over and kept moving forward,” linebacker Kevin Davis said.

Bobo said that he saw his defenders playing much more active, swarming to the ball and beating the Roadrunners at the point of attack, all of which were missing against CU.

“(I’m) super excited, it was a complete turnaround from last week,” Davis said. “Guys were excited, guys were trying to get to the ball, guys were doing their assignments, so it was exciting.”

Bobo said that the team tried to help out its undersized defensive line by being active with the guys up front and supporting them with plenty of run blitzes. The results are evident.

The much more active defensive line and supporting linebackers completely shut down the UTSA rushing attack holding them to negative 1 yards rushing for the game.

And the defense finished with six sacks for the game, five of which came in the second half when all of the pressure was on the defense.

For a team that’s been searching for some pass rush since fall camp started, it had to be an encouraging performance.

“In the second half, the D-line turned it up a notch,” Safety Jake Schlager said. “Coach English did a heck of the job calling the defense for the second half. We mixed it up brought some more pressures.”

CSU led the game 20-14 at halftime, and the offense did not give the defense much leeway by only scoring three points in the second half, but in the end it did not matter as the CSU defense shut out UTSA after halftime.

Senior linebacker Kevin Davis had three sacks on his own in the game to go along with six tackles and a forced fumble. Linebacker Evan Colorito and defensive lineman Jakob Buys each recorded a sack, while Watson and safety Justin Sweet were credited with half sacks.

As a whole, it was a lockdown defensive performance in the second half, which included two big fourth-down stops on the only second half drives where UTSA had any sort of success moving the ball after halftime.

The Rams held UTSA to 73 total yards in the second half, twelve more than CSU’s own offense put up. The game was solely on the defense, and they responded accordingly.

“In that second half, everyone was relying on the defense to keep getting stops,” Buys said. “The people out there were like hey, the defense has got this, even us. Nobody was doubting anybody out there it was a real confidence booster for everybody.”

It was not a perfect game from the defense to be sure, they struggled to get off the field on third down in the first half and they allowed too many big passing plays, but when it mattered, the defense locked it down and carried the Rams to a win.

Looking forward to a matchup in week-three against the University of Northern Colorado, the defense will be needed.

While it may be against weaker competition, UNC comes into the game averaging almost 56 points per game. The Bears starting quarterback, Jacob Knipp, went down with an apparent shoulder injury in week-two, but backup Kyle Sloter came in to lead UNC to a 55-52 victory over Abeline Christian. Sloter threw for 408 yards and six touchdowns on the day.

Not only have the Bears seen success through the air this season, but also on the ground. Headlined by running back Trae Like, who scampered for 136 yards last week, UNC rushed for 272 yards against ACU.

Two weeks into the season, UNC is averaging 574 yards of total offense per game.

The CSU defense has a lot of positives to build upon, but the UNC attack is nothing to scoff at. It will take another strong performance by the Rams’ defense to slow down the Bears.

Collegian sports reporter Eric Wolf can be reached by email at sports@collegian.com or on Twitter at @Eric_Wolf5