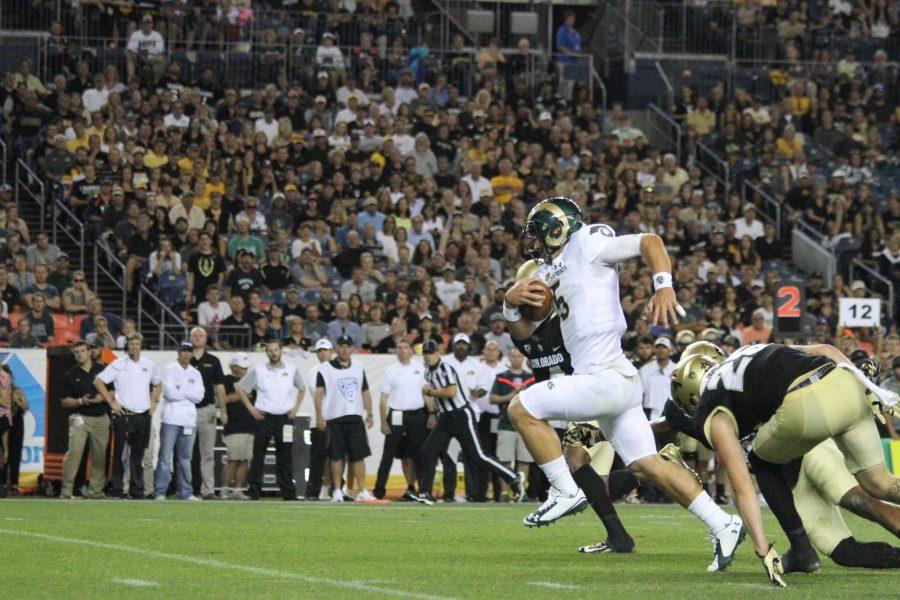 After being embarrassed week-one in a 44-7 blowout loss to CU, the offense is going to look a little different this Saturday, when the Rams square off with the University of Texas at San Antonio. The biggest change will be at the quarterback position, where graduate-transfer Faton Bauta will be taking over for last season’s starter Nick Stevens.

After Stevens’ underwhelming performance in the Rocky Mountain Showdown, the 2015 second-team All-Mountain West quarterback may have seen his time as QB-one come to an end. Stevens was pulled in the third quarter after struggling throughout the game, completing just 6-of-20 passes for 31 yards, and a pair of interceptions.

Coming in for cleanup duty, Bauta led the offense to the only score of the day, throwing a touchdown to sophomore wide receiver Marcus Wilson, his first career touchdown. On the day, Bauta completed 6-of-9 pass attempts for 32 yards, and added 39 yards on the ground. Acting more like a long term relief pitcher than the lead man in the rotation, Bauta performed well enough to take over the playcalling duties this week.

Since joining the program last winter, Bauta has proved to be one of the hardest workers on the team, showing attention to detail on and off the field. Bauta’s work ethic has been widely praised by head coach Mike Bobo over the past few months, but until now, it was Stevens who ultimately won the starting job in practice.

If Bauta performs well Saturday, he may secure the starting job moving forward, but if he struggles, the CSU coaching staff will have a dilemma to deal with at the quarterback position. Would they go back to Stevens? Maybe even give the freshman Collin Hill a chance?

Competition is good because it can bring out the best in an athlete and generally leads to the best players in the starting lineup, but chemistry and cohesion are equally important. If the offense is going to succeed moving forward, there will need to be stability from the quarterback position and that needs to happen soon.

If Bauta is the guy, then roll with him. If Stevens is your man, then stick with him. The last thing Bobo wants is for his starting quarterback is for them to be hesitant and looking over his shoulder every time he makes a mistake. Football is a game of quick decisions and any quarterback needs to be confident in his actions, even through adversity.

When Stevens certified his role in the starting offense, beating out Coleman Key in 2015, he performed significantly better than when the pair were both receiving playing time. Stevens’ decision making improved and the Rams offense began to really mesh well in the second half of the season.

Obviously Stevens played poorly against the Buffs and it not much of a surprise that the veteran Bauta is getting a chance in week-two, but Stevens was far from the only player to struggle in that game. The offensive line got dominated physically, the running game was non-existent in the first half, the wide receivers struggled to make routine plays and just about everything else went CU’s way Friday night, but it was one game.

UTSA will give the team a chance to reevaluate and access the best option at QB as the team gets closer to conference-play. The Road Runners played the Rams tough in 2015 and there is no such thing as a “gimme win” in college football, but obviously CSU will be expected to take care of business at home Saturday.

Whether it is Bauta, Stevens or even Hill, week-two will be monumental in the determining the Rams starting QB for the rest of 2016.