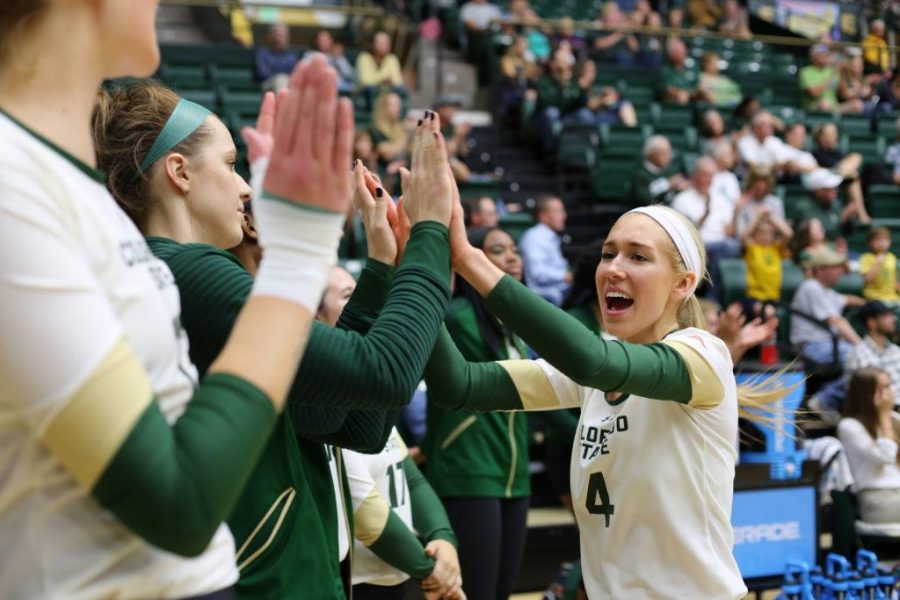 Colorado State University's McKenna Thornlow celebrates with the volleyball team after the Rams score against Fresno State on Thursday night at Moby arena. The Rams beat the Bulldogs in 4 sets.

Colorado State (7-5, 1-0 MW) started the match slow. Serving was a major issue in the first set for Rams, as seven balls failed to make it over the net, causing a CSU head coach Tom Hilbert’s palm cover his face seven times.

The service struggles hampered the Rams ability to gain momentum in the first set, as the team trading points with the Bulldogs to the tune of 14 score ties. CSU would go on to prevail in the first set 29-27 after going back and forth after the slow start.

“We dug ourselves a hole, like we’ve been doing, in set one,” Hilbert said. “(We) came through it, won that set close. Played well in the second set, but really that was an unrealistic set.”

The unrealistic set number two was a dominant performance by the Rams.

CSU jumped out to a quick 9-1 lead courtesy of five straight serves by freshman Olivia Nicholson won by the Rams. CSU never trailed in the second set, ultimately winning 25-14.

Other Rams to join Cizmic with double-digit kills numbers include: Kristie Hillyer (14), Olivia Nicholson (12) and Jasmine Hanna (12). Freshman setter Katie Oleksak had 59 of the team’s 66 assists on the night .

The sweep looked imminent for the Rams as the team led 19-15 in the third set, but errors would come back to bite CSU, giving Fresno State the third set 25-23.

“I think we’re going to win at the end (of the third set), and then we lose,” Hilbert said. “We made some pretty silly mistakes there at the end of that (set). But, now we get a chance to come back in the fourth set and see how we bounce back.”

Bounce back they did.

CSU finished the Bulldogs off in the fourth set 25-22 to secure their first Mountain West win of the season. Hilbert said that he saw his team mature throughout the match, as they battled through 15 service errors on the match.

“(Games like this) are things these guys have got to be tested with,” Hilbert said. “Although they’re unpleasant to me at the time when they are happening, they are very good for them to understand what kind of competitors they are…this is a good win.”

CSU will be back in action at home in Moby Arena on Saturday Sept. 4 when they continue Mountain West play against San Jose State.