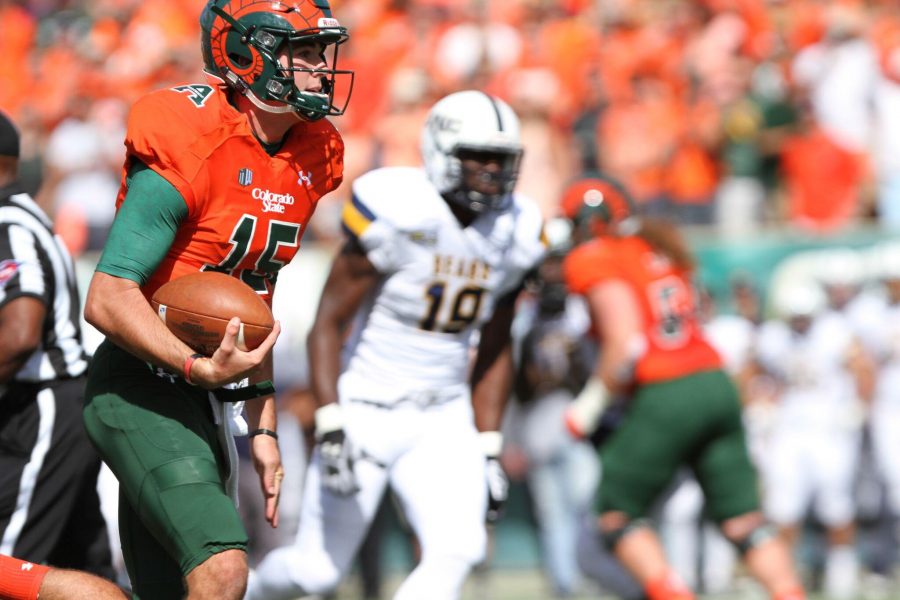 Colorado State has a quarterback, and his name is Collin Hill.

On Ag Day, CSU (2-1) started a true freshman at quarterback for the first time since 2010. The Rams, or Aggies for this game, went on to rout the University of Northern Colorado (2-1) 47-21, giving CSU their second consecutive win.

The highly anticipated debut of Collin Hill did not disappoint, as the freshman from Moore, S.C. came out slinging.

After seeing the Rams first drive of the day stall after one first down, Ray Guy Award candidate Hayden Hunt pinned the Bears on their own 1-yard line.

The poor field position didn’t hurt the Bears however, as they marched down the field relatively easily and found themselves threating to put the game’s first points on the board — on a side note, the scoreboard read “Aggies” for CSU and “Teachers” for UNC.

CSU sophomore Braylin Scott put an end to the drive, intercepting UNC quarterback Kyle Sloter for his second interception of season. Scott also had an interception against UTSA in week two.

“They were driving, they had some momentum. To get that interception and get that stop was big,” head coach mike Bobo said. “You’re going to give up some plays sometimes defensively, but you’ve got to continue to play, play assignment football. (Scott) was able to do that, he was in the right place and he played the quarterback’s eyes and made the interception.”

Hill led the Rams down the field on an eight play, 61-yard drive, capping it off with the first touchdown pass of his young career via a 2-yard fade to Elroy Masters, giving the Aggies a 7-0 lead.

The very next drive, Hill showed that his arm is not the only way he can move the ball. Hill made a UNC defender miss in the backfield, and pursued to scamper 51 yards down the field for a touchdown, putting CSU up 14-0. The run is the longest by a CSU quarterback since Bradlee Van Pelt went for 79 yards in 2002 against Fresno State.

“We caught them in man-coverage and everybody was chasing the back,” Bobo said. “I don’t think he has great speed. He said that he was out of breath, said that was the farthest he’s ever run; and he is in this Colorado climate, his lips were completely white. I said ‘you need to go get some chap stick and some water.”

Hill went on to finish the first half 16 of 22 passing for 266 yards and four touchdowns. All four touchdowns were thrown to different receivers — Elroy Masters, Olabisi Johnson, Michael Gallup and Robert Ruiz being the recipients, all catching their first touchdown of the season.

Hill’s 266 yards in the first half against UNC were more than CSU had combined in their first two games (171) against the University of Colorado and UTSA.

Redshirt sophomore kicker Wyatt Bryan hit a 53-yard field goal to end the half with CSU up 38-0. Bryan’s kick set a new career long one week after he set a previous high of 46 yards.

The Aggies defense carried their momentum over from week 2, as they held a UNC offense averaging 56 points per game scoreless in the first half, extending a streak of holding opponents scoreless to 16 straight drives.

That streak, however, was broken in the second half as the CSU defense gave up 21 points to UNC and quarterback Kyle Sloter.

While the team may have come out flatter than coach Bobo would have liked, the end result was what the team wanted, and several players had a chance to see the field and make an impression.

CSU freshman running back Marvin Kinsey Jr. saw the field plenty against UNC as usual starter Dalyn Dawkins did not play — Bobo said Dawkins could have played, but the team wanted to keep him healthy for Minnesota next week. Kinsey finished the game with 18 carries for 97 yards and a touchdown.

Redshirt junior Xavier Williams came back from a two game suspension for violating team rules to haul in four catches for 91 yards, 50 of which came on the first ball thrown his way.

“It was good to get Xavier back,” Bobo said. “Xavier Williams is a talent, and if he can do the right things to be part of this program, he can be a difference maker for us.”

UNC may have out fighting in the second half, but this day belonged to Collin Hill. Hill finished the game 21 of 27 passing for 315 yards and four touchdowns, while leading the Aggies to a 47-21 victory.