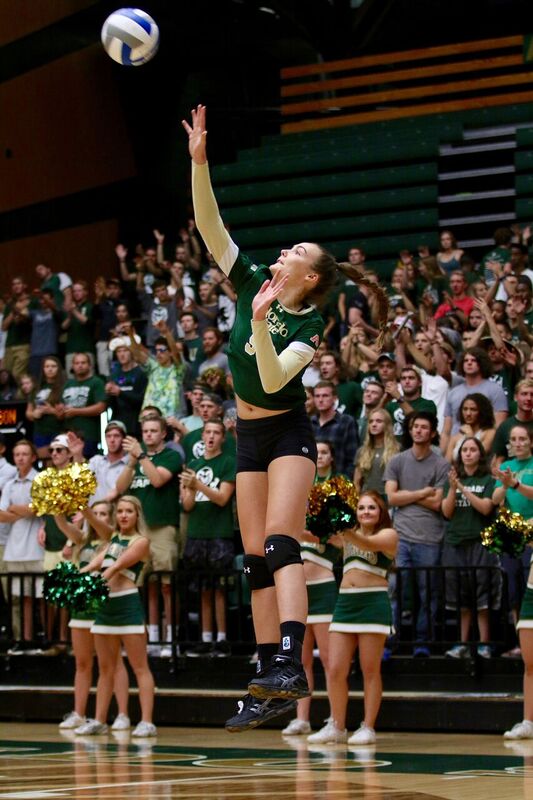 Waffles and muffins for breakfast are about as common in America as fireworks on the Fourth of July.

But in Denmark? Not so much.

“Your breakfast is really sweet,” freshman middle blocker Paulina Hougaard-Jensen, who is in her first year with the CSU volleyball team after coming to the United States from Denmark said. “It’s almost like cakes for breakfast. We eat waffles but not for breakfast, it’s more like a dessert.”

And then there’s country music.

“It’s weird and I don’t know what to think about it,” Sanja Cizmic, a junior outside hitter from Croatia said.

“It doesn’t get me,” Hougaard-Jensen said with a laugh. “You know you want to dance when you listen to music? I just don’t get that from that kind of music. It’s just there in the background.”

Cizmic and Hougaard-Jensen are both in unique situations as the two European-born volleyball players on the CSU volleyball team. They chose to travel across the Atlantic Ocean to attend school in America and play college volleyball at the highest level, in one of the nation’s most consistent programs. With that, in addition to the normal acclamation to college life, and a different primary language, there are many new things and adjustments to get used to culturally. From the unique and possibly unhealthy choice of breakfast foods to exclusively American-themed music, it can be a lot to take in.

And more notably, the mindset of the people differ. America is a fairly fast-paced society. People speed down the Interstate to get to work and the drive-thru is often more popular than the dining rooms at restaurants.

“The mentality of the people is different,” Cizmic said. “We’re really laid back, especially where I’m from in my city. You wake up and go to a coffee shop on the beach and you’re there for three hours just talking. Here it’s like ‘Coffee to-go, run to class, do this, do that.’”

Then there’s the distance factor. Being away from home for any college student is not easy, especially at first. Homesickness is practically inevitable, but it can be even more so when your family is halfway across the globe.

“My senior year I switched club teams and went seven hours away from home,” Cizmic said. “I already kind of lived my senior year of high school by myself. That made the transition easier but it was still really hard being six months from seeing my family because I was super close to them, especially my brother, and then not being able to speak my own language and to not see anyone. Skype and Facetime are great but it’s still not the same.”

Prior to joining the Rams, both Hougaard-Jensen and Cizmic gained valuable experience playing in their home countries. Hougaard-Jensen spent time playing on the Danish national team as well as the under-20 team, where she was named the top middle blocker in the Danish Volleyliga in 2015-2016. Cizmic played for the Croatian junior team, even taking second in 2013 at the Junior Volleyball World Championships.

The experience of playing for these teams proved to be good preparation for playing college volleyball in the states. They traveled often, played competitive matches against talented players, and got the chance to play with and against players much older than them. Hougaard-Jensen played with three teammates in Denmark who would also play for the same Wisconsin team that played in front of a Moby Arena volleyball record of 7,018 fans in 2014 before eventually advancing to the round of eight in the NCAA tournament. As a high school sophomore, Cizmic had two teammates over the age of 30.

“They played with older players,” head coach Tom Hilbert said. “That helps when they come back here and play with players their own age. They travel a lot, they have to be thrown together with a new group of players and learn how to play with different people. They have to learn different personalities, it’s all very valuable.”

One of Hougaard-Jensen’s fondest memories came as a member of the Danish national team, when two years ago they played a match against Turkey. The same Turkey team that played in the 2012 London Olympics.

“It was my first time on the national team,” she said. “I was 18 and it was just a huge experience to get to play against some of the biggest stars in the world.”

Recruiting players internationally is not the easiest of tasks. Hilbert usually hears about a prospect through a trusted source and then goes into an evaluation process. Hilbert usually gets one chance to evaluate players overseas in-person. The potential players must be strong academically and be well-versed in the English language. It can sometimes be a hit-or-miss. But with Cizmic and Hougaard-Jensen, he might just have hit it out of the park.

“It really is pretty cool,” Hilbert said. “I think Sanja is one of the kindest people I have ever met and Paulina is too. These kids want to come here, generally come for the right reasons, they want to meet new friends and expand their horizons a little bit. It’s been great for our program with both of them, they’re both cool people and they’ve taught our players a lot about the world.”