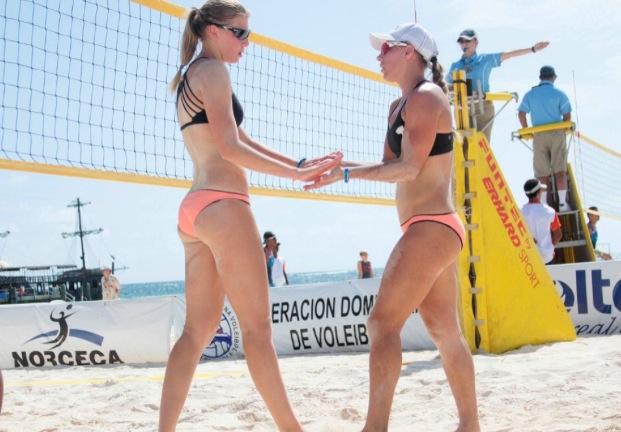 Over the course of the past several Olympics, Kerri Walsh Jennings and Misty May-Treanor have caught the attention of the nation and helped introduce America to the wonders of beach volleyball.

The duo combined to win three gold medals together in the 2004, 2008, and 2012 Olympics and are considered by some to be the greatest beach volleyball team of all-time.

Those two icons have undoubtedly become the faces of beach volleyball in North America, maybe the world, but it is not just exclusive to those two.

The Toronto native took home a gold medal with her partner at the 2012 Ontario Summer Games and competed at the U19 World Championships in 2014. The plan for her is to play in several beach tournaments this summer in various places in North and Central America while possibly trekking over to Europe to play there.

Former two-time All-American Adrianna Culbert, whom graduated from CSU last year after an illustrious career as a Ram, is currently attending grad school and began playing on the beach volleyball team at South Carolina.

Both players find themselves in a little different spots in their beach careers.

Poletto gained a vast amount of experience playing in Toronto, which contrary to popular American stereotypes, has a large beach front with a big community that gathers to play.

For Poletto, her beach time during the summer is not a conflict of interest but rather an opportunity to better her game for the collegiate season — which has always been the goal. But somewhere down the road, she hopes take the professional route in beach volleyball and make a run at the sport’s biggest stage for her home country.

“Right now, it’s just to improve mainly,” Poletto said. “My focus is here playing for CSU and getting to the (NCAA) tournament and doing well in the tournament. After CSU I’m hoping to go professional for Canada. The main goal would be the 2020 Olympics but who knows what’ll happen by then. It depends on how much experience I can get these next few summers. If it ends up happening that would be great, but we’ll see.”

And then Culbert, who was the MW player of the year last season and recorded eight career triple doubles in her time at CSU, including an ultra-rare quadruple-double last season against San Jose State has had some exposure to playing doubles, but this is a fairly new undertaking.

“I think it’ll be a totally different experience,” Culbert said. “Instead of trying to have communication with six other people you just have to know your partner and their tendencies and how to work with them since they’ll be the only other person on the court.”

“It’s a much more focused sport than indoor,” she added.” You can be playing with five other people on the court and some of those people don’t touch the ball. In beach, you’re in every single play whether you want to be or not.”

In indoor volleyball everyone has an assigned position with specific duties that come with that position. But to be successful on the beach, you have to be able to do it all.

“You have to play all positions of the game,” Poletto said. “It’s not just ‘You’re a middle blocker.’ You have to block, pass, set, and be able to hit. And your hit is not just hitting the ball as hard as you can. You have to try to get different shots in and see the court more and adapt to different situations.”

With that being said, in an indoor setting there’s a squad of six players out on the floor. An errant pass can be saved by another teammate and there’s less situations where a solo block is required. But on the beach, it’s just two players needing to be proficient in all aspect of the game. This leaves them a little vulnerable at times, but that might be a good thing.

“They’re exposed as competitors,” head coach Tom Hilbert said. “They have to do every part of the game and if they don’t they’re going to lose. And that’s the best part of it to me.”

For a lot of Americans who have viewed beach volleyball in the Olympics over the last few years, an image of Walsh Jennings and May-Treanor duking it out with an opponent, just the two of them on the court is likely prevalent in many minds.

This may give off the impression that a doubles pair in beach is entirely on their own without any team backing, which is simply not the case at the NCAA level.

On the team at South Carolina, Culbert is still very much a member of a team, which practices and travels together like CSU. The only difference is that the matches operate as an individual and team competition, with the pairs competing to win for themselves with points being added to the overall team score.

With this ringing true, there might not be a group celebration at the net after a point in indoor, but the desired team atmosphere is very much alive in NCAA beach volleyball too.

“One of the best parts about indoor is getting to celebrate with five other people and just having that moment with so many other closely connected girls,” Culbert said. “With beach you do only have one partner, but there’s so many girls on a team where you still get that team dynamic.”

Playing volleyball in the sand versus indoors has its differences and is somewhat similar to playing basketball outdoors in the park compared to regular basketball. There is typically less structure in terms of running a system and executing set plays.

The weather can get wacky, Poletto said she has practically played in snow before. But it’s still volleyball, and the same fundamentals of the game still remain the same even if strategy differs.

“The same things win,” Hilbert said. “That is the important part that players can learn if they play a lot of doubles. They’re done sometimes in a different way but the same things win the game.”