The five greatest Rocky Mountain Showdowns in history: No. 4 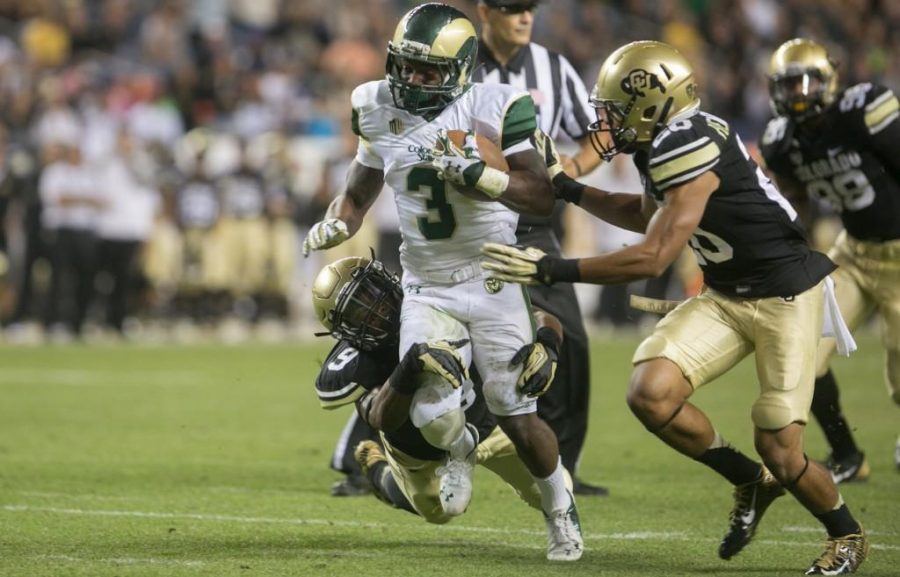 The Jim McElwain era is a bittersweet time period to reflect on for most Ram fans out there. After Steve Fairchild laid the foundation for the program, recruiting NFL players such as Crockett Gillmore, Weston Richburg, Garrett Grayson and Shaquil Barrett, McElwain rolled into town and built the program up seemingly overnight, leading the team to a New Mexico Bowl victory in his second season (2013).

In 2014, McElwain’s Rams finished the season with a record of 10-2 and an appearance in the Las Vegas Bowl. Before the team ever made it to sin city, McElwain accepted the job at Florida, and CSU ultimately got rolled by Utah in the Las Vegas Bowl (45-10) under interim head coach Dave Baldwin, and just a few days later the hiring of Mike Bobo was announced.

Despite the ill-feelings towards McElwain that some may still feel, his success against CU was unprecedented. In McElwain’s three seasons, Colorado State won the Rocky Mountain Showdown twice. None of which were more exciting than the 2014 season.

Under the lights for a Friday night showdown between the in-state rivals, 63 thousand fans packed into Sports Authority Field at Mile High. After beating the Rams by 14 the year before, it looked like Buffaloes were well on their way to another double digit victory in 2014.

In the first quarter, the Buffs put the first points on the board with a 54-yard touchdown pass from Sefo Liufau to Nelson Spruce, who burned former Rams DB DeAndre Elliott at the line of scrimmage and ran wide-open down the field.

With a chance to go up 14-0 early in the second quarter, CU had the ball at the Colorado State two-yard line. The Ram defense stuffed the Buffs on three consecutive goal-line plays and forced CU to kick a field goal. Arguably the turning point of the game, the Ram defense kept the team in the game after the offense punted on the first four drives of the game.

Down 10-0 in the second quarter, the Rams scored their first points of the evening when Alabama transfer running back Dee Hart plunged into the endzone to bring CSU within three (10-7). In Hart’s CSU debut, the former SEC back came out with a bang, rushing for 139 yards.

Along with Hart, Treyous Jarrells added 121 yards on the ground, marking the first time CSU had two running backs rush for 100 yards in the same game since 1996, when Calvin Branch (127) and Jaime Blake (138) did so against Tennessee-Chattanooga.

In the third quarter, The Buffaloes looked like they might put the game away for good when Spruce hauled in his second touchdown reception of the game with a one-handed grab, once again putting CU up by ten (17-7).

Just when it felt like Rams were out of it, CSU would go on to score 24 unanswered points, starting with a third quarter touchdown run from Jarrells. Early in the fourth quarter, the Rams saw the lead for the first time when quarterback Garrett Grayson dropped back and hit wide receiver Rashard “Hollywood” Higgins, who beat the defensive back on the fade route and caught a perfectly placed pass in the endzone. (21-17)

Later in the quarter, Hart scored his second touchdown of the day, extending the lead to 28-17. As Hart crossed the goal-line in front of the CSU students, the stadium erupted and for the rest of the game there was no doubt in the minds of fans of the green and gold, the Centennial Cup was coming back to Fort Collins.

Jared Roberts added the final points of the evening on a 52-yard field goal with just two minutes remaining, further sealing the fate of the Buffaloes. After leading the team to a bowl victory in 2013, McElwain became the first coach since Bob Davis (1948 and 1949) to defeat CU twice in their first three seasons at the helm.

“We got off to a slow start which drives me nuts,” McElwain said following the game. “I kind of felt like we restored the order. All of you guys gave me a hard time last year, but you don’t come here not to compete. You expect to win the game and we won it.”

No stranger to rivalry games from his days at the University of Alabama, McElwain recognized the importance of winning the in-state contest, even if it had no effect on conference standings. In his tenure at Colorado State, McElwain’s Rams played in three extremely competitive Rocky Mountain Showdowns, highlighted by the double-digit comeback in 2014.

McElwain was the catalyst that shocked this program back into contention after a decade’s worth of despair. Although his time with CSU came to an end after the 2014 season, CSU football would not be in the position to contend like they are now, without McElwain.

Collegian sports reporter Justin Michael can be reached by email at sports@collegian.com or on Twitter @JustinTMichael