Rams offense to be led by running game 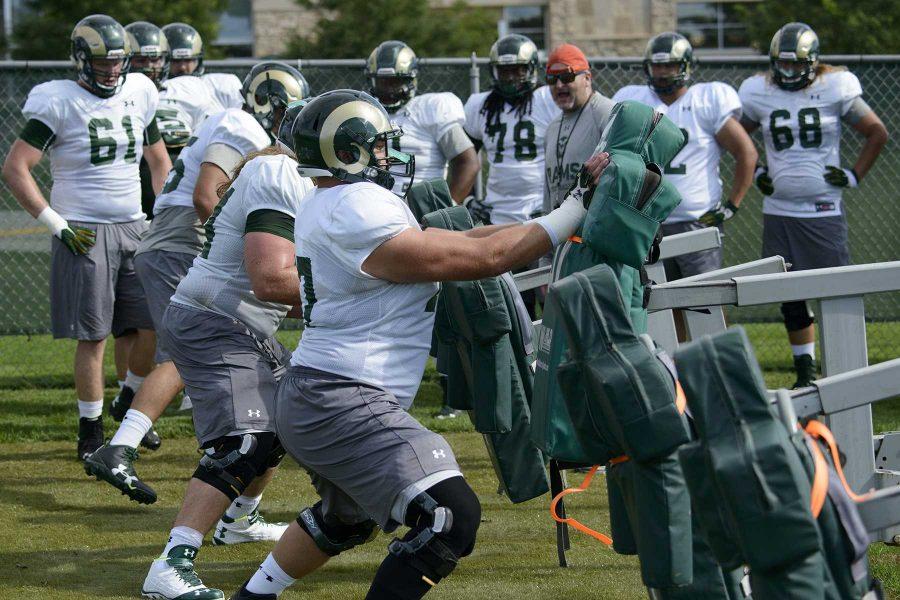 Junior center and anchor of the Colorado State offensive line Jake Bennett knows the offensive potential of this year’s team is there. All he has to do is look back to last season when things started coming together for CSU’s offense and the team won four out five games to close the year.

“I think you saw a little bit of it last year when we started rolling and clipping off some good rushing yards and getting our passing game going,” Bennett said.

The Rams reeled off four straight wins heading into the Arizona bowl defeat to Nevada due in large part to the offensive production Bennett talked about. Over the win streak, the team averaged 34.2 points per game and ran for an impressive 259 yards per game over that span.

Now, as the 2016 season opens up, gone are playmakers Rashard Higgins and Joe Hansley, and there are still question marks at quarterback, wide receiver and on the defensive side of the ball. The 2016 offensive formula could look very similar to the end of last season: run the ball early and often.

The team has the pieces to keep the offense on the field and to chew up the clock, which will most likely be necessities this season.

Offensive linemen Fred Zerblis, Zack Golditch, Nick Callender and Bennett return to lead one of the most experienced pieces on the team. They will be paving the way for CSU’s deep stable of talented running backs in Dalyn Dawkins, Izzy Matthews, and freshman standout Marvin Kinsey Jr.

Coach Bobo announced on Monday that the team’s initial starting five linemen would be Zerblis, Callender, Bennett, Golditch and senior Nebraska transfer Paul Thurston. Trae Moxley and Colby Meeks are the next men up in the rotation.

It’s a deep, experienced unit. One that is ready to pave the way for the offense this season.

“We have definitely come a long way from last year,” Bennett said. “I think we definitely could step up and fill that role of the workhorses that guys can get behind.”

A large part of this group’s development comes from settling in with offensive coordinator and offensive line coach Will Friend. It took awhile for the group to adjust to Friend’s coaching style last year, but when it clicked, it clicked, Bennett said. That’s when the offense started rolling.

“I think last year we could have been really really good,” Golditch said. “I think towards the end of the season we started to see that. We started to pick it up a little bit.”

Now, the offensive has had an entire offseason with coach Friend and his offense. They are familiar with his coaching style. They know his expectations. The unit is much farther along than it was last year.

It does not hurt that the players running behind CSU’s “workhorses” come complete with plenty of talent themselves.

Dawkins and Matthews have continued to impress throughout spring and fall camp. Both players’ potential showed at points throughout last season, but the expectation entering this season is that both backs will improve upon last year and be more consistent.

The two experienced runners are joined by fall camp standout freshman Marvin Kinsey Jr. Coach Bobo calls him a playmaker, and in the team’s scrimmage last Saturday, Kinsey led the team in rushing with 157 yards on 15 carries.

The talent in the backfield is an offensive lineman’s dream.

“Those are the guys that we want to block for,” Golditch said. “If you have a nasty get after it running back, those are the type of guys that we are gonna lay ourselves down for and go all out for. Seeing them have good plays, it’s a great feeling for us.”

They are offensive lineman, they know they are not getting any glory or camera time, but they have an opportunity to block for some aggressive, playmaking running backs. That’s all they could ask for.

“It’s a lovely thing,” Dawkins said. “(There’s) lots of experience and that means a lot of good things will happen. It’s a lot of trust. I trust those guys up front with all my heart. Being with those guys again, it’s only getting stronger.”

That relationship needs to keep getting stronger for CSU this season. With the talent at running back and on the offensive line, it will come as no surprise if the 2016 season runs through the running game.

“I want to run the ball,” Golditch said. “If I could, I would run the ball 75 percent of the game because I think that’s where games are won.”

Collegian Sports Reporter Eric Wolf can be reached by email at sports@collegian.com or on Twitter @Eric_Wolf