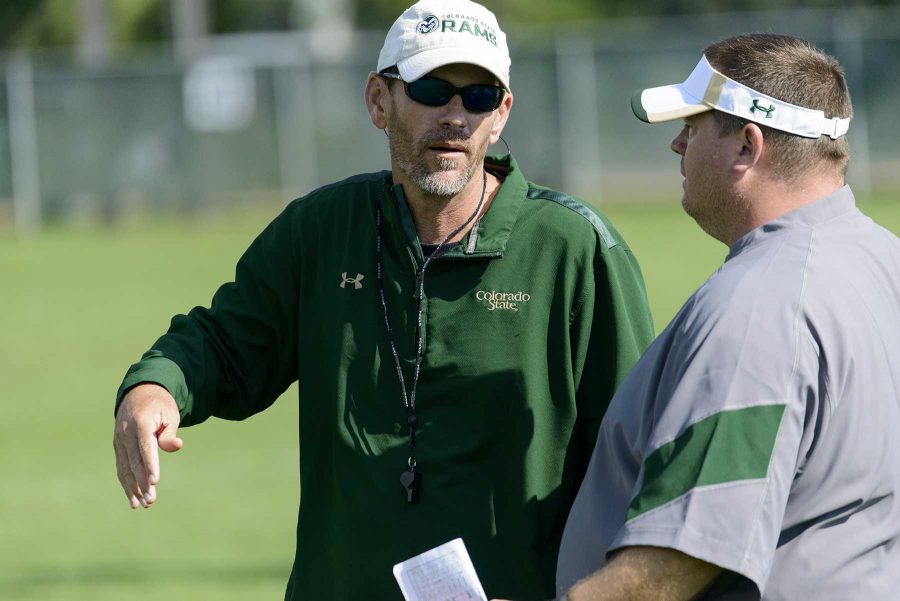 The Colorado State Rams hold their second and final scrimmage of fall camp Saturday at noon at Hughes Stadium.

It may only be the second scrimmage of fall camp, but the team plays a football game in two weeks, they need to start moving forward fast. There is no time for a third scrimmage.

“We will do some situations to make sure they are ready for any situation that could come up in the first game,” coach Mike Bobo said. “But tomorrow will be their last opportunity to really just go play football within a drive and see what happens.”

With only two weeks to prepare for the season opener, the coaching staff needs to get settled as soon as possible so that the team can start to get ready for a game. That means settling position battles and finding those guys who are ready to play week one.

The scrimmage will not be the ultimate deciding factor on how this team will look for the rest of the season, but for week one, it’s the last true evaluation period the coaching staff will get.

“I’m looking for guys that we can believe we can depend on in the first game,” Bobo said. “We got to make some decision of how we are gonna practice next week…. and who is gonna get the majority of the reps. That will be the main thing. Looking for guys that play with great effort, that are disciplined in the little things and guys that make plays.”

It’s the last chance the players have to prove themselves before the season starts. Jobs are going to be won and lost during Saturday’s scrimmage. The team’s depth chart has to be built at some point, and by all indications, it is getting built tomorrow.

“I think it’s a huge day for a lot of people because it is the last chance of being in a game like situation up until September 2nd,” Offensive lineman Zack Golditch said. “Tomorrow there is going to be guys with a lot of energy, some guys with a lot on the line.”

While there is going to be competition across the field tomorrow, Bobo put an emphasis on the quarterback, receiver, and defensive back groups. They are the positions he will be watching closely, and the coach’s plan is to open up the offense and get a high amount of attempts from his quarterbacks.

If the team does focus primarily on the passing game tomorrow, there is going to be plenty of competition within those aforementioned groups.

The coach wants to see somebody emerge out of the trio of competing quarterbacks in Nick Stevens, Faton Bauta, and Collin Hill. On Wednesday, Bobo said that he should know who his starting quarterback will be after the scrimmage. For all of the quarterbacks, tomorrow looks to be the most important day of fall camp.

Bobo liked what he saw out of his wide receivers after the first scrimmage, but he is looking for more consistency. Multiple players are fighting for the number one role at each receiver spot. The guys who can keep making plays on a consistent basis are the players Bobo is going to put on the field.

The pass-heavy approach also gives Bobo another chance to get a look at his defensive line, and especially the pass-rush out of the defense. A stronger pass rush has been something the coach has been wanting for since the team’s last scrimmage. It’s all going to be part of the test tomorrow.

“There is no question, get those guys rushing the passer and getting them in passing situations,” Bobo said.  “Let’s see who has got the speed off the edge.”

Freshman running back Darius May becomes the latest Ram to switch from one side of the ball to the other after the 6-1, 190-pound freshman out of New Orleans made the switch to defensive back on Friday.

“That’s a permanent move right now to get some more speed in the secondary,” Bobo said. “He’s an athletic kid, we feel good about it. He’s gonna start out at safety. I did watch him in his individual, he can backpedal. He looks smooth in his transition, so we will see.”

Juco transfer wide receiver Michael Gallup is not likely to participate in the scrimmage after spending the week with a walking boot on his right foot. Bobo said that he thought he saw what he needed to see out of Gallup in the first scrimmage, and now the main concern is keeping the player in shape and getting him ready to play mentally within the next two weeks.

Linebacker Deshon Mayes was limited at practice today, but should be ready to go in the scrimmage Bobo said. Freshman Arjay Jean will not be participating due to injury.

Junior safety Jake Schlager was back on the field on Friday wearing a red jersey. He was limited in practice, and though Bobo did not give any specifics about his status, he looks like another no-go for the scrimmage.