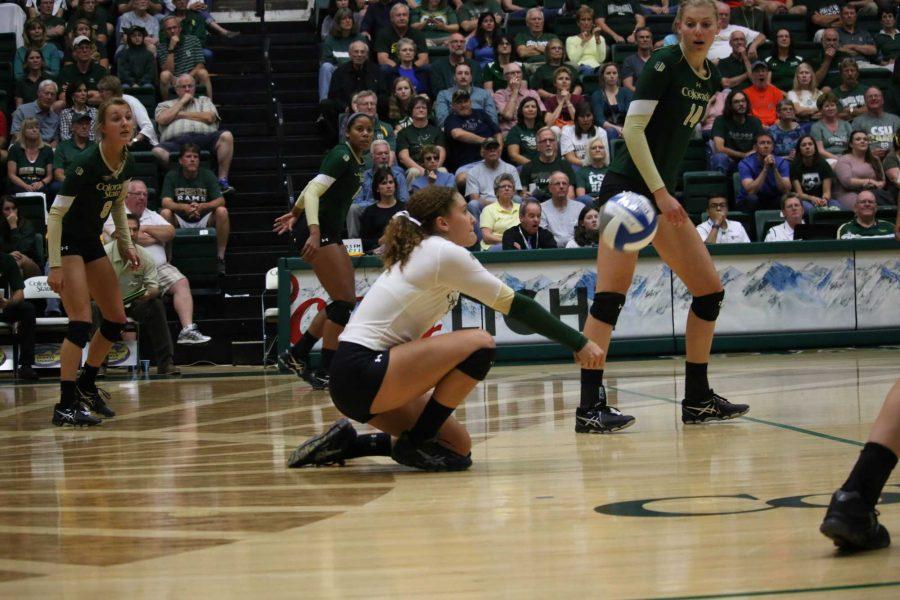 As far as first impressions go, Friday’s night debut for freshman Olivia Nicholson and Katie Oleksak was about as superb as it gets for two players in their first college match.

Both newcomers came up huge in helping No. 25 CSU (1-0, 0-0 MW) sweep visiting North Dakota State 3-0 (26-24, 25-13, 25-23) and win their season opener in front of 2,275 fans at Moby Arena. The season-opening sweep marks the seventh consecutive season in which the Rams have opened the season with a sweep and the sixteenth time in the 20 years under Coach Tom Hilbert they have won their opening match.

Oleksak recorded a double-double, collecting 12 digs and distributing the ball all over the court, racking up 36 assists. Nicholson hit a sky-high .562 and finished with nine kills on 16 attempts and made her presence known defensively with nine digs.

Juniors Alexandra Poletto and Jasmine Hanna provided much-needed maturity a Poletto hit a ridiculous .733 and had 11 kills, including seven in the third set. Hanna buried 12 kills on 27 attempts.

“It was a great match for Olivia for her first college match for her to run up those kind of numbers,” Hilbert said. “Axi (Alexandra Poletto) and Jasmine played with incredible maturity. We really needed that from them. They’re the two people that surround Katie. The three best hitters were in a little triangle around her and that’s nice for a setter to have that. And she (Oleksak) did a good job and had a nice first college game too.”

It wasn’t all smooth sailing for the Rams. The Bison, who finished 19-14 a year ago to finish in fourth place in the Summit League, put up a fight in the first and third sets.

The first set saw CSU hold NDSU to a lowly .135 hitting percentage while CSU had five blocks. However, the Rams committed six service errors, allowing the Bison to hang around before CSU was able to hold them off 26-24. Poletto was big defensively with four blocks. Oleksak dished out 13 assists and Nicholson had four kills on seven attempts.

Then the second set was a completely different story as CSU blew NDSU out 25-13 while hitting .571. Hanna had three kills as did junior outside hitter Sanja Cizmiz. Oleksak had nine more assists and the Bison continued to struggle offensively, converting only seven of their 24 attempts with four attack errors.

“I think we realized we weren’t playing to our full potential,” Oleksak said. “That’s what we said in the huddle, ‘We can play better this.’ We just stepped out and got it done.”

The third set was all Poletto. The junior from Toronto had seven kills on nine swings, helping the Rams rally from an early deficit to finish off the Bison. And after the game, it was Poletto who was thrilled with the performance of her younger teammates.

“For a first college match I don’t think they could’ve asked for much more,” Poletto said. “I think a lot of them are very mature and handled the excitement, stress and nerves that come with the first college game really well.”

The Rams looked strong offensively while taking advantage of a struggling Bison defense. NDSU finished the game without a single block.

Friday’s night opener also nearly saw its first use of the new replay rule that allows coaches the opportunity to challenge a disputable call. Oleksak dove for a loose ball and made contact near the ground. It was questionable whether she was able to hit the ball before it hit the ground. Hilbert and Oleksak communicated and elected to not challenge it.

“The reason why I didn’t go to the replay was I used my knuckle so part of the ball would have been down,” Oleksak said. “I wasn’t 100 percent sure.”

“I kind of wanted to challenge something,” Hilbert chimed in with a laugh.

After their season opening victory, CSU will be back in action tomorrow night against St. Mary’s at 7 pm MT.