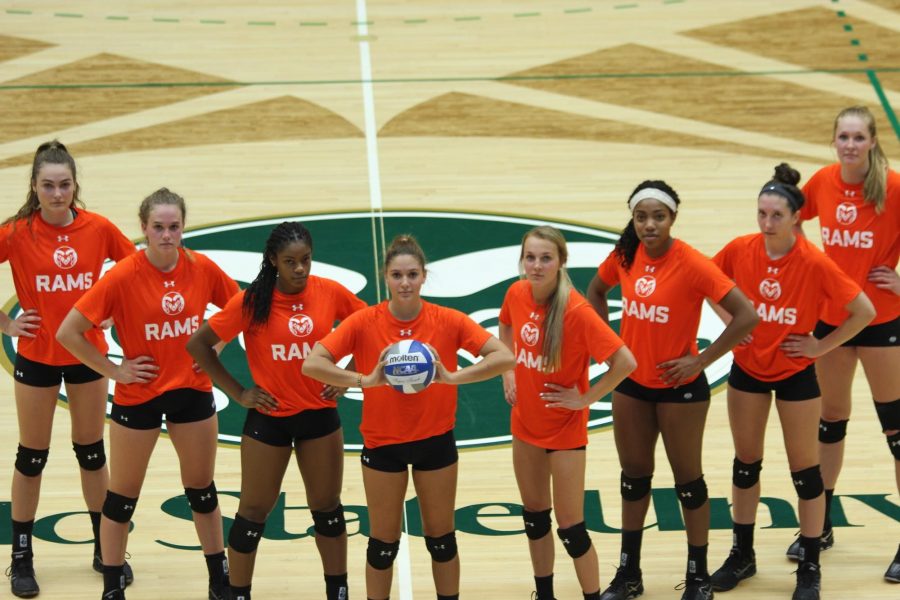 Inexperience does not necessarily equate to immaturity.

And that’s exactly what the case may be for the No. 25 ranked Colorado State volleyball team heading into their opening weekend of the season at home against North Dakota State and St. Mary’s.

Colorado State’s roster is bottom-heavy to say the least. With only one senior, four juniors, and two sophomores on the roster, the Rams will turn to several freshman to make key contributions. There are eight freshman on the team, including six true freshman and two who redshirted last season. But this bunch of youngsters, according to the lone senior on the roster and defensive specialist Cassidy Denny, does not lack maturity.

“ He (head coach Tom Hilbert) always says this, and he’s been saying this for the last two weeks and I totally agree, but this is the most game ready and mature freshman class we’ve ever had,” Denny said. “And for them to have six new people, that’s huge. Their game IQ is so high and they all want to work really hard so they’re really great teammates. Them being freshman, I can’t even imagine them when they’re juniors and seniors.”

As winners of seven consecutive Mountain West conference championships and a stellar season a year ago in which the Rams ran through conference play unbeaten, expectations are high. But there’s also a realization that through the flashes of brilliance that will occur at times, mistakes and inconsistency will also exist. And that’s something Hilbert can live with.

“I have a really high standard of what I want here,” Hilbert said. “I’m going to push them to do it but I have to understand who they are that they’re not going to come out every day and play at that level.”

Perhaps the one who will be asked to do the most is freshman Katie Oleksak, who will start at setter. It will be up to her to pass and set the ball to the Rams hitters. While in high school, Oleksak was twice named a Third-Team Under Armor All-American and brings a maturity beyond her years. The transition and adjustment to the speed and demands of the college game for Oleksak has been smooth, and astoundingly quick so far.

“She walked in the door and she was up-to-speed,” Hilbert said. “She’s really good. There’s things she has to learn but I feel very fortunate to have a freshman that’s as competent as she is.”

It’s a learning process for Oleksak, one that will only continue as she gains experience at the collegiate level. Ironically enough, Hilbert is a former setter who has spent time assisting Oleksak throughout fall practices with her technique and communication with the players she’ll be setting up.

“He works with the setters so it’s really nice to have that mentorship,” Oleksak said. “He’s helping me connect with the middles and hitters. We’re getting there and we’re getting better.”

An added benefit to having so many new faces learning the program—and the college game at the same time—is they get to do it together. In a veteran-laden team it can be easy for the new players to fall behind. There is a power and comfort in knowing that many of your teammates are going through the same process of adjustment.

For junior defensive specialist McKenna Thornlow, the experience of Friday’s opening match against North Dakota State will be slightly different than that of her younger teammates. Thornlow transferred to CSU after playing her first two collegiate seasons at North Texas after attending high school in Colorado Springs at Rampart High School. Thornlow expects to bring a team-focused mentality to her role.

“I’m a big-talker and encourager of my teammates,” Thornlow said. “I’m always for my teammates and I’m always loud. I’m always that type of person that points at someone after they get a kill and is just yelling on the sidelines. Whatever I can do off the court, as well as playing defense, if I can help my team and be a great teammate, then that’s exactly what I want to do.”

Thornlow finds herself in an interesting position as a new member of the Rams program but an experienced collegiate player. For now, all she can do is be there for her younger teammates while also adjusting to the program as well.

“I’m still new,” Thornlow said. “I’ve never played in Moby either but I can give them confidence and encourage them and help them. I can tell them ‘It’s going to happen, you’re going to have a bad play but how are we going to move forward from that.’ I can be that bigger sister, older guardian-type role for them. It’s just knowing that I have their back and they can always come to me if they ever need help.”

All the new faces will be thrown into the fire quickly. But with the Rams picked to win the Mountain West for an eighth consecutive year, it appears that the newcomers haven’t provoked anyone to think anything else than seeing Colorado State have another standout season.

Sports Reporter Michael Roley can be reached at sports@collegian.com and on Twitter at michael_roley