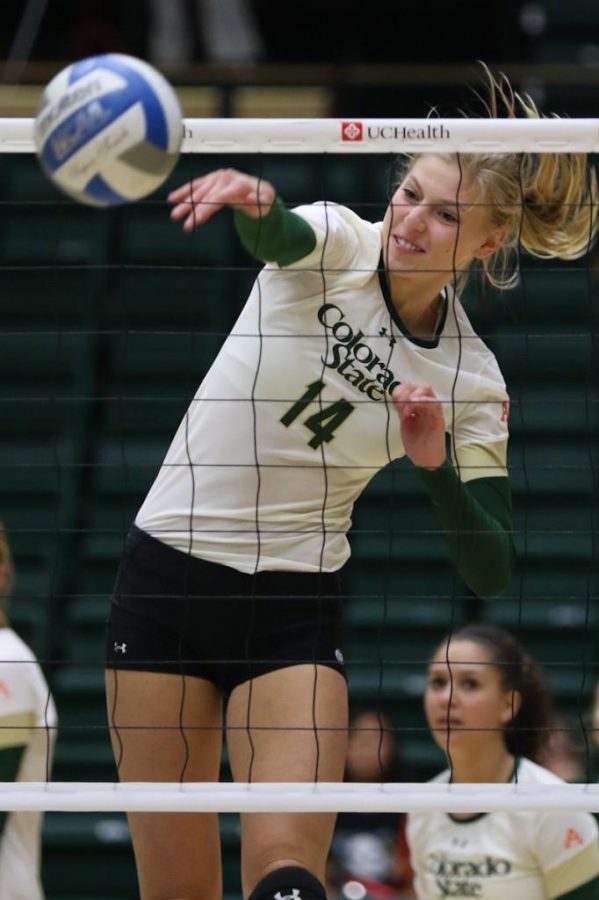 When the CSU volleyball team takes the court for its season opener Aug. 26 there will be no shortage of offensive firepower or options for head coach Tom Hilbert to turn to at various positions for the No. 25 ranked Rams.

CSU returns three players from last season who tallied more than 100 kills. Junior middle blocker Alexandra Poletto returns as the Rams lone preseason All-Mountain West player after notching 229 kills while carrying a .345 hitting percentage last season. Alongside Poletto, junior outside hitter Jasmine Hanna returns after burying 220 kills a year ago. Sanja Cizmic finished her sophomore season with 122 kills while splitting opportunities with Hanna and then-senior and all-MW performer Alex Reid, who led the team in kills with 327, at the outside hitter position.

“Offensively we have a lot of different weapons,” coach Tom Hilbert said. “Our outside hitting, statistically in practice, has been as good as it’s been in many years with Sanja and Jasmine.”

The Rams will turn to true freshman Katie Oleksak to get the ball to their big hitters. Oleksak, a two-time Third Team Under Armor All-American selection from Phoenix will take over the setter position. Even as a freshman, Oleksak has earned the confidence and trust of her older teammates.

“She is doing a great job setting and getting the ball where we want it all the time,” Poletto said. “It’s going to be really easy for us to adjust to sets.”

There has been a competition at the defensive specialist spot throughout preseason practices. Senior Cassidy Denny is slated in the position right now, according to Hilbert. Denny has by far the most experience at the position, having seen action in each of her first three collegiate years and finishing fourth on the team a year ago with 244 digs. But freshman Amanda Young is in the mix as is McKenna Thornlow, a junior transfer from North Texas. Sophomore Katie Craig has also done good things in practice, Hilbert said.

“It’s still wide open, “Hilbert said. “We think we know who we’re going to play but if they’re not playing well we’ve got some other options.”

This year’s squad will feature a number of players who could see the floor, giving the Rams potential depth across the board and an ability to adapt to any given situation during the course of a game. In addition to the versatility at defensive specialist, the Rams could plug players in at positions across the floor.

“We do have a lot of options,” Hilbert said. “We have three middles (middle blockers) all that can play. We’ve got a couple of freshman that are able to come and do some things as outside hitters.”

Collegian Sports Reporter Michael Roley can be reached by email at sports@collegian.com or on Twitter @michael_roley