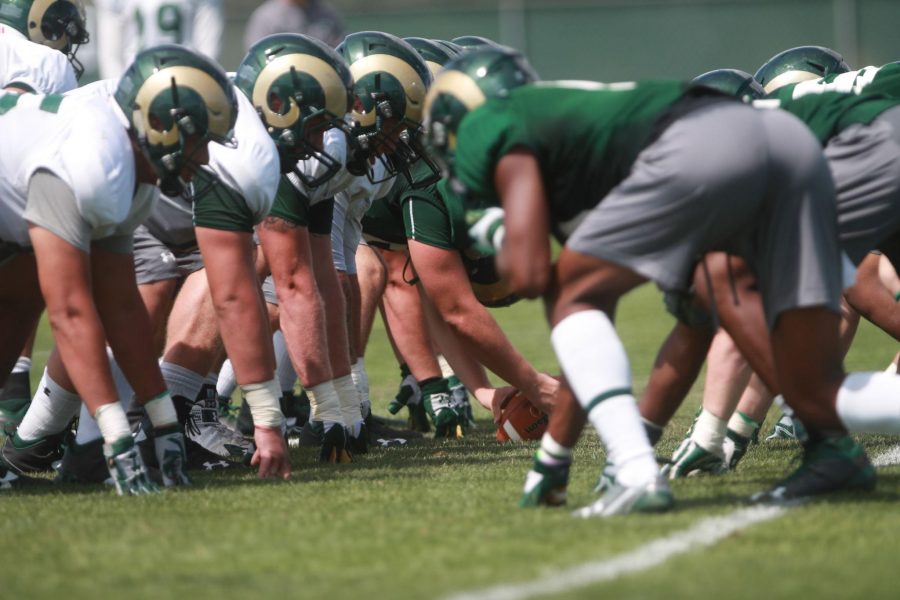 Monday marked the first day of classes at Colorado State University. For the football team, that meant taking the field for fall camp practice number 20 on the same day that they returned to class.

Going back to school for most students is taxing. So is working through another practice in fall camp. It’s just that now, another aspect is added to the routine. It’s enough to take a toll on the players.

“When you start back up in school sometimes you go on a little bit of a lull,” coach Mike Bobo said. “You are tired of practicing each other, you are ready to get in the season and play.”

“You get to the point where everyone is calling out everyone’s plays (and) everyone knows what everyone is doing,” safety Jake Schlager said. “Everyone is just tired of hitting each other. We are just ready to go down the road and hit someone else for a change.”

That opportunity to hit someone else for a change is less than eight days away. There is finally an opponent coming in to view.

That looming contest, the Rocky Mountain showdown against the University of Colorado, has signaled a break in the fall camp routine.

The team has been practicing some specific CU gameplan material since early last week, but up until Saturday’s scrimmage, the primary focus was still on fall practice. That means players were focused on improving themselves and internalizing their concepts, while coaches were trying to find out which players they could depend on and the ones who knew what to do.

Now, the focus has shifted off of their own team and onto the opposing one.

“It’s knowing what the opponent does, what they like to do, their tendencies and how we’re gonna do that,” Schlager said. “So I think the transition to that is more focused on the other team and not just about us.”

That transition from fall camp to game preparation gives a new look to the players. Now instead of just working against each other, they are starting to work against CU’s concepts. holding scout periods, getting different looks in practice and working with a gameplan offer up a change of pace for the players.

“I’m excited to learn what we are going against,” linebacker Kevin Davis said. “To recognize those formations (and) recognize what they are gonna run on a certain down or out of what personnel they are going to run it. It’s just doing straight good-on-good or running against our own offense for the entire fall camp to actually getting used to what the other offense is gonna run at CU. It’s fun.”

Though it did get old after awhile and the team is starting to take the focus off of practicing against each other, there is one advantage of heading into the CU game after competing with each other for the entirety of fall camp. CSU and CU run the same defensive scheme.

It’s not identical by any means, but both teams run a three-four defensive alignment. Coach Bobo said that practicing against their own defense all spring and fall camp has helped the offense, and especially the younger guys, get a jump on recognizing CU’s defense.

Still, the focus was all internal. All of the energy was directed against each other. A different outlet for all of that energy sits a little bit more than a week away.

“The testosterone has definitely built over camp,” Schlager said. “I mean you get (eight) days and the testosterone is gonna break loose and we are gonna be flying around. Everyone is looking forward to that.”

Coach Bobo stressed that the energy is something that needs to be held in check. He knows his team is excited, and they should be excited, it’s the Rocky Mountain Showdown. But the coach stressed that there is still plenty of time to get better between now and the game. It’s not all game-plan work, they have to get themselves ready to go, one day at a time.

The team can not get too caught up in the pre-game excitement, just like they can’t get caught up in a fall camp lull.

“These guys ought to be enjoying the moment because if you wait until the CU game to say ‘hey, I’m ready to enjoy it, I’m ready to play’ we are gonna get our tails whipped,” Bobo said. “That’s what I keep preaching, that we can’t flip a switch and say we are ready to play because there is 65,000 plus in the stands. We gotta be working every day because we know they are.”