The Rocky Mountain Collegian • May 5, 2016 • https://collegian.com/articles/sports/2016/05/freshman-sprinter-nathan-gishs-battle-with-type-one-diabetes/ 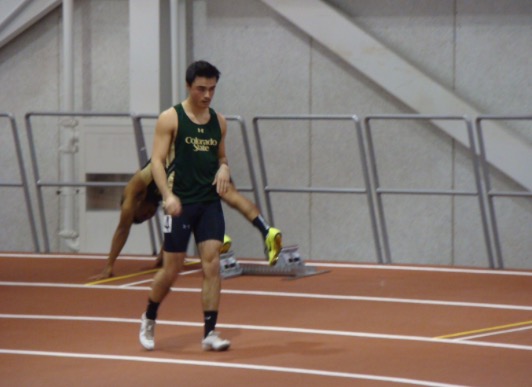 Preferred walk-on Nathan Gish has had an athletic journey unlike most. It all began in the sixth grade, when he was diagnosed with juvenile diabetes, also known as Type 1 Diabetes.

“At first I thought it was just the flu, because I was really dehydrated and throwing up constantly,” Gish said. “But apparently my pancreas was going into overload.”

This was a dark and confusing time for Gish. Before this rare occurrence, he had lived a pretty normal life for a sixth grader at Tavelli Elementary School in Fort Collins. All of a sudden, he was on the brink of death.

“I was in a coma for about one week and a half,” Gish said. “I don’t really remember anything except waking up in a hospital bed with IV’s attached to me.”

At the time, Gish loved playing football and baseball. Besides racing in four separate events at the state meet during his senior year, he was an all-conference running back and played center field for the baseball team through his sophomore year at Poudre High School. Regardless of his rare and potentially life-threatening condition, he never considered giving up sports.

“I already had played sports for a while so I just kept going with it because it allowed me to get away and destress,” Gish said.

However, there are certain things Gish has to do in order to compete and practice regularly.

“I have to test my blood sugars a lot before, during, and after meets to make sure that my body functions how it should,” Gish said.

Doing so has become routine, yet tedious for Gish. But, he recognizes the importance of taking the necessary steps to ensure his good health. If he gets careless and nonchalant about his blood sugar at meets and practices, there are many serious risks.

“If my blood sugar gets too low it can make me really light-headed and very susceptible to passing out,” Gish said. “And If my blood sugar is too high I can start cramping up really easily and pull a muscle.”

But in his seven-year battle with Type 1 Diabetes, Gish has picked up some tricks along the way.

“In high school my dad suggested that I eat honey constantly throughout race day to give myself sudden bursts of energy,” Gish said. “I still do so whenever I can and have gone through massive amounts of honey at each one of my college meets.”

Since joining the Colorado State track and field team, sprint and hurdles coach Karim Abdel Wahab has monitored Gish and coached him accordingly. Wahab even knew Gish before he was a member of the team.

“I recruited him and brought him on an official visit when he was a senior,” Wahab said.

From a coaching standpoint, Wahab does not feel that Type 1 Diabetes is too much to handle when one has a tough kid like Gish on their hands.

“Sometimes when he gets too tired we’ll modify his practice accordingly but it doesn’t happen very often,” Wahab said. “90 percent of the time he is tip-top and ready to go.”

Obviously there still is the risk of Gish’s blood sugar levels not being at an ideal level. So, Wahab and the rest of the CSU coaching staff stays prepared.

“We communicate it with our trainer and we always have a backup plan for him,” Wahab said. “But he’s been doing great thus far and it hasn’t been necessary.”

Gish began his first season as a hurdler and 200-meter runner. However, once the season transitioned from indoor to outdoor, Gish decided to narrow his focus.

“I started off hurdling also but now I just run the 200 because that is where I am at my best,” Gish said.

Despite his condition, Gish has motivated his team by constantly working hard. Gish has also raised the bar on race day.

“Whenever you have a freshman who competes under pressure it just inspires everyone,” Wahab said. “We weren’t sure if we’d take him to indoor conference or not but we did and he ran his best race of the season.”

Though Gish has been battling a strained hamstring during the outdoor track season, his performance during indoor makes for an impressive freshman season. Gish set his personal best in the 200-meter run with a time of 21.81 seconds.

Teammate Joshua Deloach, senior leader of the team, has been aware of Gish’s condition since the season began. He has also known about Gish’s potential since he was in high school and believes that Type 1 Diabetes will only get in the way if Gish lets it.

“He comes out here, works hard, and does what he has to do,” DeLoach said. “You adjust, you just adapt, it gives you no excuses at all.”

Collegian Sports Reporter Eddie Herz can be reached at sports@collegian.com and on Twitter @Eddie_Herz.