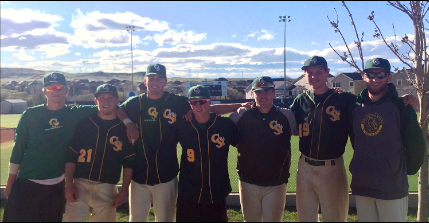 In a crucial weekend series for the CSU club baseball team, the Rams managed to take two out of three games from the Colorado School of Mines. Dominant performances on both sides of the diamond were seen in games one and two, as the Rams captured both victories by double-digit run totals.

But, after a few errors allowed Mines to plate some early runs, the Rams found themselves quickly working from behind. The top of the third inning in game one was a pivotal point for the Rams. They entered the inning down 8-6, but poured in nine runs, eventually winning the game 20-9.

Though the scorecard indicates that this was a purely offensive battle in which the Rams outmuscled the School of Mines, CSU got the job done at the mound as well. Tate Hughes was on the bump for the Rams. He threw six innings and allowed only two earned runs. Hughes had to battle some defensive miscues, but was still able to toss a very effective game.

Matt Mader closed out the game for the Rams in the seventh, striking out the first two batters he faced. Mader induced a harmless pop fly to end what was a very impressive inning for him.

Game two was much less of a contest. Mines pitchers had just as much trouble as they did in game one getting outs. The Rams cruised to a 17-3 victory. Senior starting pitcher Alex Marshall went the distance for the Rams, completing all seven innings on the mound. The three runs the Fossil Ridge High School product gave up were unearned.

A sweep would have been ideal for the Rams, but taking two of the three games allows the Rams to determine their own fate in the conference race. They will host three conference games against Colorado Mesa University at City Park Field on Friday and Saturday to conclude the season.

All CSU needs to do is win two games in order to earn another regular-season conference title.

The weather forecast for Fort Collins shows heavy rain from Thursday to Monday, which threatens postponement for a second time. The series was originally supposed to be held on April 16th and 17th, but a snowstorm had other ideas.

Collegian Sports Reporter Eddie Herz can be reached at sports@collegian.com and on Twitter @Eddie_Herz.