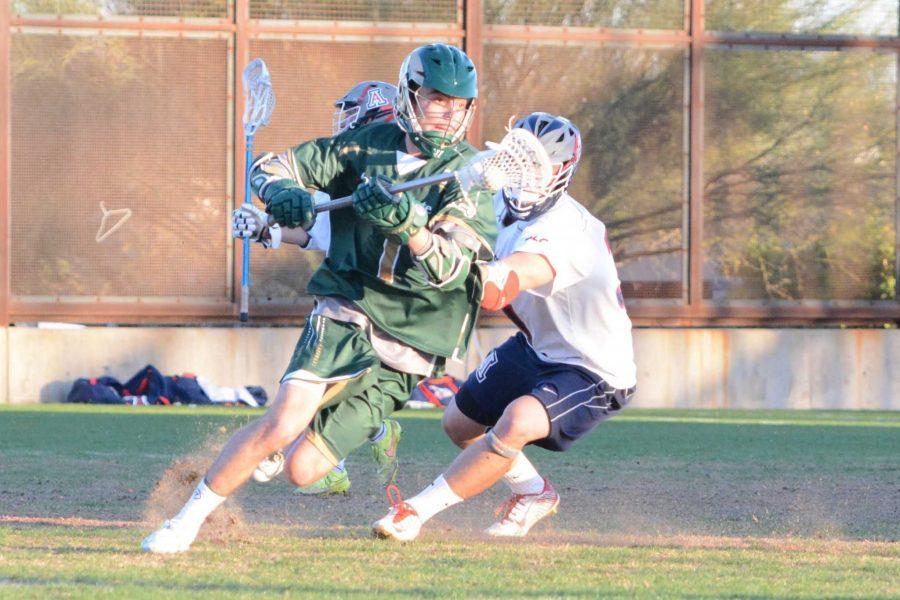 There are those that have a handful of group members and meet only a couple times per week – if that. Then there is the CSU men’s club lacrosse team.

Over the past two decades the Rams men’s lacrosse team has established itself as a force to be reckoned with in the Men’s Collegiate Lacrosse Association (MCLA) Division I standings and in the Rocky Mountain Lacrosse Conference (RMLC). Since 2000, the team has won the RMLC nine times and the MCLA championship five times.

This type of success does not come easy or without players who are willing to go through adversity and sacrifice. To play on the team requires a tremendous level of commitment.

“While it is club we tend to call it our ‘virtual varsity’ program, just because of the level of commitment,” said Jared Wade, a senior at CSU and a captain for the Rams lacrosse team. “In the fall we are only going three to four days a week but … in the spring we are putting in 30 hours, and during travel weeks up to 60 or 70 hours a week.”

The level of dedication required to play for the Rams is embodied by Colorado State junior Chase Warner, a midfielder. Warner is in his third year in the program and has become a key tool on the offensive side of the field for the Rams.

“That has been why this program has been so good and successful, a lot of the coaches haven’t treated it like a club program,” Warner said. “They don’t mess around and they want to win championships.”

As a freshman Warner received a respectable amount of playing time and scored eight goals and dished six assists on the year. It was his sophomore year that Warner’s numbers exploded, when he scored 18 goals and tallied five assists.

“Chase is definitely one of our best left-handed middies, any team that watches film on him knows he loves that dodge to the left-hand side, and he almost commands a pole every time he has the ball just because you cannot play him with a short-stick. It’s almost an insult to try to go at him like that,” Wade said.

He has a certain confidence to him, even after scoring a goal or after a great dish for an assist, those watching can tell it is nothing new to him. As Wade puts it, “he brings a sort of swagger on the field that not a lot of guys can parallel.”

This year Warner is a leader on the team, and naturally a lot of the younger players look up to him. One in particular does more than others, though. Blake Warner, Chase’s younger brother, is a freshman attackman in his first year with the team.

“Oh yeah, I definitely look up to him,” Blake said. “Chase is a really good dodger from up top … (and) he’s really good at putting it away bottom corner. That’s his bread and butter.”

Blake, much like the older Chase, is also headache for opposing defenses. It didn’t take long for first-year head coach Ted Fifield to notice Blake’s talents on the field.

“Blake is probably the best dodger on our attack unit,” Fifield said. “His abilities to dodge, draw a slide, and make sound decisions with the ball have given opposing defenses problems so far this season.”

Blake is only four games into his collegiate lacrosse career, but has already tallied an impressive six points off of three goals and three assists, a couple of which have even come to and from his brother.

Chase Warner (12) of the CSU club lacrosse team dishes an assist to his younger brother Blake (7), who scored the goal on Oregon during the Rams’ 9-8 loss to the Ducks earlier this season. Video courtesy of Chance Murray.

“This past weekend against Oregon we had the first brother connection and Chase assisted me on a couple goals, so that was pretty cool,” Blake said.

Chase equally enjoys playing with his younger brother and the benefits that come along with it.

“It’s awesome, Blake and I are brothers and best friends,” Chase said. “… We just have a connection out there. It’s just awesome to get to play with someone you know so well and have a feeling for what they are going to do and have watched them play for so long.”

Colin McDonald, a senior midfielder on the team, has also taken notice of the chemistry between the Warner brothers on the field.

“They have a good connection for sure,” McDonald said. “They have good chemistry with each other, that attack-to-midfielder duo when they are on the field at the same time helps each other out a lot.”

According to Fifield, the team will need to rely on that chemistry at times this year for offense.

“The Warner brothers are both vital components of our team offense,” Fifield said. “At the moment, Chase is a first-line midfielder and Blake is a first-line attackman. We will rely heavily on both of them to generate goals and assists for their respective units this season.”

The two brothers do not just represent what it means to be a Rams lacrosse player on the field, they do off of it as well.

“I think Chase and Blake Warner really exemplify what it means to play for us,” Wade said. “Our three core values are family, hard work, and greatness, and not only do they literally exemplify family, they also work so hard and they are so successful off of the field, and when you translate that to being stellar players on the field, it’s really cool to see.”

While Chase and Blake are surely among the most respected players on the team, they both lack one thing – a championship ring.

The last time the Rams won the MCLA title was in 2013, one year before Chase arrived and while Blake was still just a sophomore in high school.

“We’ve been kind of on a rebuild right now, slowly getting better. I think this year will be a really good team,” Chase said. “We have a lot of the juniors like me that were freshman when we first came out here, right after that national championship team, so this year and next year we will be our best years since I’ve been here.”

This year’s senior class for the Rams is the last one to have a connection to the last national championship team, and Wade sees similarities between this year’s team and the one that won the title.

“There’s a lot of good leadership from the upperclassmen and that’s what I remember from when I was a freshman on that national championship team,” McDonald said.

The season is still young; the Rams sit at 2-2 heading into a road stand in California over spring break. There is still plenty to be determined, but one thing seems to be certain in the minds of the Rams: with committed and talented players like the Warners, a national championship is not out of question.

“If we stick to what we do we can go all of the way, for sure,” McDonald said.

Collegian football and sports reporter Geoff Huebner can be reached at sports@collegian.com or on Twitter @Huebnermedia93.