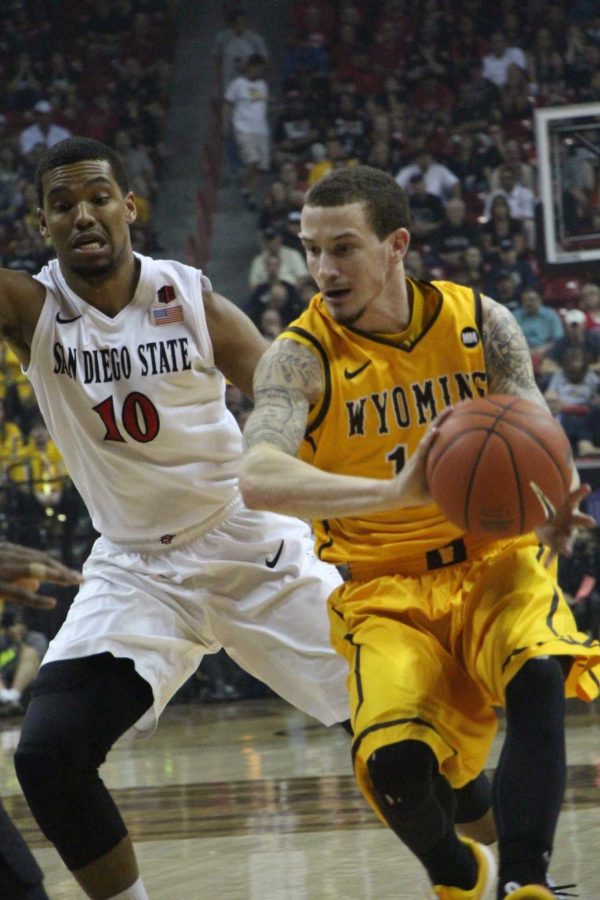 The Mountain West Media Awards were released Sunday, and the official MW awards (decided by the coaches) will come out Tuesday. That makes this the perfect time to sneak in my own picks, which I will explain my reasoning for below:

Instead, I’ll give you my thoughts on why I gave the nod to Marvelle Harris over Josh Adams, why Cameron Oliver didn’t nab Defensive Player of the Year and how Stephen Zimmerman got left off of my All-MW teams.

It took all I had to not call Josh Adams the MW Player of the Year after watching him singlehandedly deliver wins in games that Wyoming never should have a chance in. But the Cowboys had their hiccups, unlike Fresno State, who cruised through conference play thanks to the consistently outstanding play of Harris.

Winning should be rewarded (a trend you will notice in many of my picks), and Harris made sure the Bulldogs were winners all year. That included a tough road win at Wyoming in which he outplayed Adams, which was the beginning of a six-game win streak on which the Bulldogs finished the regular season.

I’m not going to tear apart Adams’ case for Player of the Year because, quite simply, he was phenomenal. After watching both Adams and Elijah Brown in person, I came away thinking Adams was a head and shoulders above Brown as a player, despite many media members campaigning for Brown at the time.

This award could have gone to either Harris or Adams if you based it on statistics or the old-fashioned eye test, so there is really no wrong answer. Adams was slightly more efficient, which is impressive considering his workload, but Harris was a bit better defensively.

So, my tiebreaker came down to the fact that Harris made sure the Bulldogs were one of the best teams in the conference, even though their talent (on paper) was no better than a handful of teams who finished behind them. Anyone who paid close attention to the Mountain West this season, though, will remember Harris and Adams as co-Players of the Year.

Deciding on the Defensive Player of the Year was another tough one. Even without a true star like the Aztecs have had in recent seasons, they still dominated the conference, thanks almost entirely to their defense. Skylar Spencer was their anchor, making sure nothing came easy for opponents in the paint.

But Nevada’s Cameron Oliver made life tough for opposing offenses as well. Blocks are not everything when discussing defense, though (a reason that I also considered selecting CSU’s Tiel Daniels for this award). SDSU won games solely with its defense all season long, and that would not have been possible without Spencer. Again, I’m rewarding results in the win-loss columns.

I will leave you with one final stat to consider for the defensive candidates. In conference play, Spencer had a defensive rating of 90.8, meaning opposing teams scored less than one point per possession when he was on the court, which is really freaking good.

UNLV’s Stephen Zimmerman is notably absent from my All-MW teams. Sorry, but I won’t reward a guy just for being a 7-footer with some interest from NBA scouts. These awards are based on how well a player performed in conference play, and Zimmerman’s impressive stats always felt a bit hollow.

Tiel Daniels stepped up in a huge way for CSU when Gian Clavell went down, and the Rams could not defend when he wasn’t on the court. Anthony Drmic also deserves praise for the consistent scoring he provided one of the top teams in Boise State. Zimmerman, meanwhile, missed five whole games in conference play, and UNLV went 3-2 in that stretch.

If you looked at points and rebounds, then sure, you could make a case for Zimmerman. But, if you watched UNLV play, you should know better — the Rebels were terrible offensively with Zimmerman on the court. The Rams were at their best when Antwan Scott and Daniels played, and the same is true of Boise State with Drmic.

Lastly, Coach of the Year is a bit tricky. Eric Musselman (Nevada) and Rodney Terry (Fresno State) both deserve praise for how their teams overachieved, and Dave Wojcik (San Jose State) also deserves recognition for what he has done to get the Spartans on the right track.

But Steve Fisher (San Diego State) remains the best coach in the conference. It is difficult to isolate coaching on a year-by-year basis, but the Aztecs owned the Mountain West, even without having the talent they have in the past, which is a real testament to Fisher’s genius.