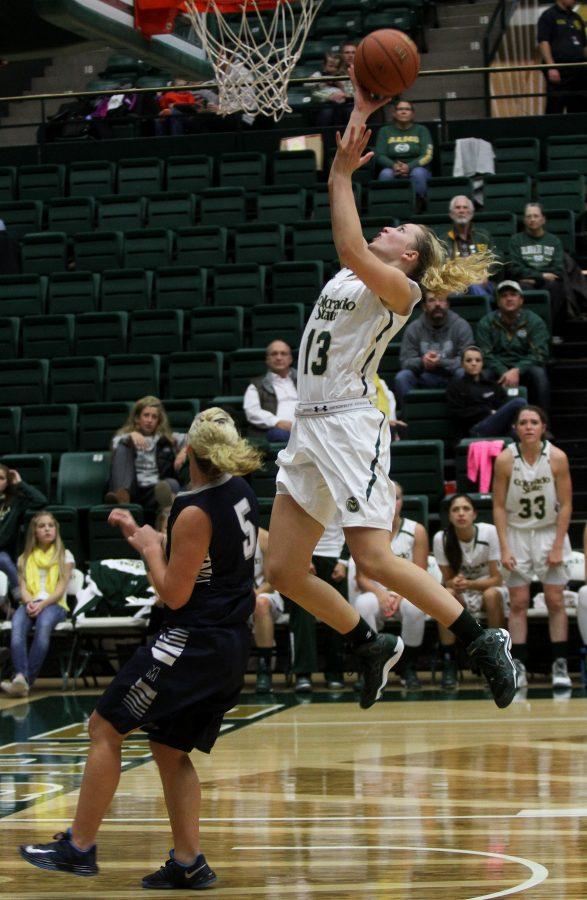 Freshman Guard Ellen Nystrom (13) goes for a layup against the Mines defence. The Rams win over Mines 95-47 during a Women's Basketball exhibition held at Moby Monday night.

CSU women’s hoops star Ellen Nystrom was named Mountain West Player of the Week as she led the Rams to wins over Fresno State and Air Force to give CSU an unblemished 18-0 record in the conference this year.

The junior out of Sweden averaged 14.5 points, 7.5 assists, 5.5 rebounds and 2.5 steals per game between the two contests. She shot an efficient 50 percent from the field for the week, and a perfect 6-for-6 from the free throw line.

The win Tuesday against Fresno State gave CSU its third consecutive outright MW regular season title. Nystrom has yet to play a season at CSU and not end a champion.

This is the first time Nystrom has received the weekly honor in her career, and the fourth time this season a Ram has won it. CSU is the only team in the MW to have had four different players win the Player of the Week award this season.

Now, Nystrom has a chance to lead CSU to its first MW Tournament championship during her time in the program. On Tuesday at 1 p.m. MT, the Rams will face the winner of Monday’s San Diego State-Wyoming matchup. Fans can watch the women’s MW Tournament on the Mountain West Network.

Collegian sports staff can be reached at sports@collegian.com.