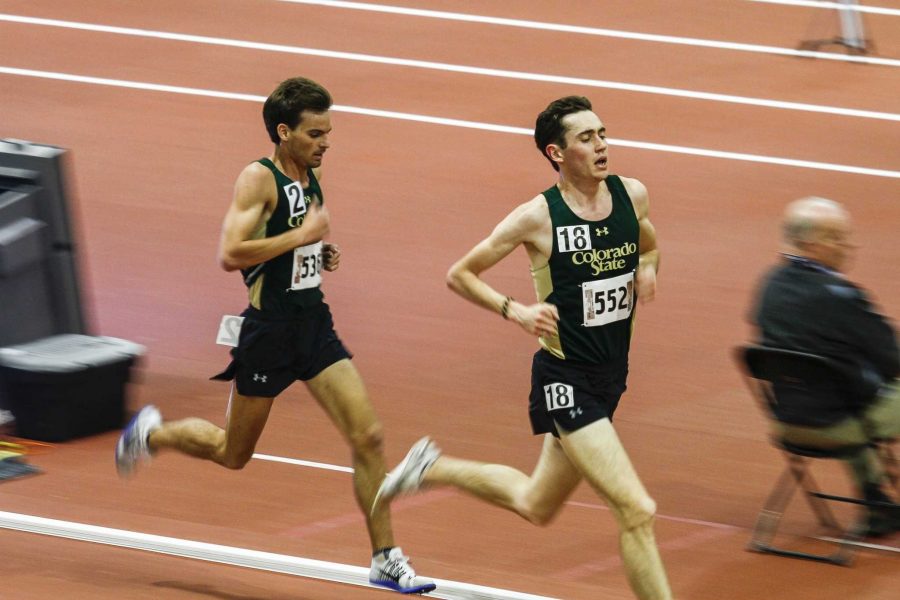 During a cool-down run on a June evening last year in Austin Texas, Colorado State University distance runners Jerrell Mock and Jefferson Abbey made a promise to each other.

They had just fallen short at the NCAA track and field Western Preliminary Regional, thus missing out on their chance to go to Nationals.

As they cooled down that night, they vowed to never know that feeling again. To never fall short again. They would do whatever it takes, and push each other so hard that they would both be cross-country All-Americans come the fall.

Their respective races propelled both of them to the NCAA indoor track and field Nationals in Birmingham, Alabama in March, where Abbey then finished 6th in the 3,000-meter and Mock took 14th in the 5,000-meters.

The roots of their success in the past year started growing early at CSU for Mock and Abbey when cross-country head coach Art Siemers laid out the groundwork and expectations for his team’s success. His philosophy was all about patience.

“It’s takes years of hard work to get to where you want to be,” Siemers said.

That’s what he tells all of his athletes. Make no mistake about it. If his athletes wanted to be successful, it was not going to be easy.

By instilling a patient approach in his athletes, Siemers established the seeds of the confidence and the love of the process that both runners employ.

Mock and Abbey credited their success to the consistency preached in Siemers’ philosophy. More miles, more training, more experience – then they would reap the benefits. It is what Siemers expected of them, and they trusted in him.

Mock harps on that consistency, saying that there is indeed no real secret to their massive leaps this season, but rather that the success stems from every workout and every mile of the years previous.

The more diligent you can be, the harder you train, the better you will finish. But in sport where consistency is measured by how many weeks in a row you can run 100 miles, it’s easy to wonder how these guys never run out of energy. Of desire. Of motivation.

Abbey sites the indoor Husky Classic meet in Seattle, Washington in February as being emblematic of their mindset as runners. In the meet, Mock set a new personal best for the 5,000-meter run and the team itself ran a meet full of personal records. The next day they all went and pounded out an 18-mile run together. They just keep on going.

“It’s an immediate shift in your standard,” Mock said. “I took twelve seconds off my 5-K time at that meet, and I woke up the next morning wondering how much I could take off my new time.”

It’s the instant raising of the bar, the instant new pursuit of an even better standard, that keeps them both pushing it to the next level.

In all of that success, both of them recognize the importance of each other.

“It’s huge, I would not be anywhere near where I’m at without Jerrell,” Abbey said. “We work super well together in races, in practice, but at the same time we are ultra competitive with each other.”

“Just pulling each other through,” Mock added. “It can take your training to a whole new level, because you’re not held up by your own motivation really.”

Abbey points to the cross-country National championships this past November as an example of the competitive relationship the two of them share.

They had never been All-Americans before, and they were running a race at a level of competition they had never experienced.

“The only reason we knew we should be there was because of both of us were there,” Abbey says. “When I peaked over my shoulder and saw Jerrell there, I was like, yeah I guess we both belong here.”

For both of them, it has helped to have somebody else at the same level, to have someone else right next to them with the same experience. They can check and humble each other. They are not afraid to tell one another to “pull their head out,” according to Mock.

And in training, they feed off of each other’s growth and momentum.

“I definitely feel lucky to have not missed a beat and been like ‘oh, there he goes,’” Mock says. “It’s nice to kind of just always be one upping each other a little bit.”

Coach Siemers goes back to that night in Austin, Texas after Abbey and Mock had just missed out on going to outdoor nationals.

“They fell short,” Siemers said. “But, they used at is motivation to train at an even higher level for this cross-country season.”

Side-by-side, neck-and-neck, Mock and Abbey pushed each other to fulfill their promise. They sustained their success together.

For the average CSU sports fan, the rise of Mock and Abbey might have seemed to come out of nowhere, but both of them reiterated that this was not a meteoric rise into the elite echelon of distance runners. They expected this success. They made a promise with every intention of keeping it, and would not go back on their word.

Collegian Sports Reporter Eric Wolf can be reached at sports@collegian.com and on Twitter @emccarthy22.