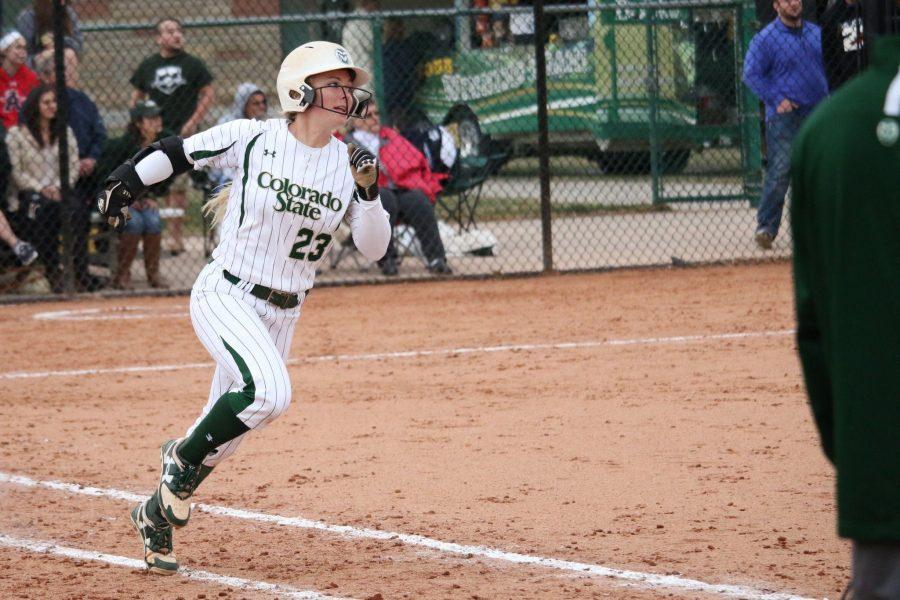 CSU shortstop Haley Hutton has been the Rams' best batter in the non-conference season. (Jack Starkebaum/Collegian)

After a stumble out of the gate, followed by a scorching hot finish to the non-conference slate, the Rams once again find themselves in the middle of the pack. The Colorado State softball team finished seventh overall in the Mountain West last year, and were predicted to repeat that in this year’s preseason poll.

CSU is 14-12 overall, but has won 11 of its last 13. The problem is that the top teams in the MW from last year are returned most of their best players and starters. With little turnover in the conference, the challenge still presents itself for the Rams to bridge the gap between themselves and teams such as last year’s champion Fresno State, currently ranked No. 23 in the NCAA standings.

“It’s safe to say that we’re considered the underdogs,” admitted CSU ace Holly Reinke, who was recently named MW Pitcher of the week.

Those preseason polls came out over a month ago though, and long before the Rams nearly upset No. 7 UCLA in its second game of the year, or before they pieced together an 11-2 record since Feb. 28. Now it’s about carrying that momentum over in the conference season.

“We were in a lot of those games against top-20 schools early on,” head coach Jen Fisher said. “Our ladies were upset that we couldn’t break through and win a couple of those. It really motivated them. I think that’s why we’ve been on a pretty good streak. We’re playing good defense, we’re pitching well, we’re coming up with timely hits.”

Fisher feels that the team has better chemistry than past years. With players better understanding their roles, there is now more flexibility with substitutions.

Another reason for that is the influx of freshmen talent.

“We have a lot of young girls who bring a lot of different things to the table,” shortstop Haley Hutton said. “We have six freshmen that are all capable of doing things that seniors on other teams are capable of doing. That’s what is exciting for me, is they don’t even know what they’re capable of yet.”

In addition the freshmen, Hutton believes that the team’s work ethic is simply better this year than it has been before.

“In the past, we haven’t had many girls going in and getting extra conditioning done,” Hutton said. “Every day, at least half of the team is going into that weight room and running or doing the stair master or something. Especially later on in conference, we’re not going to be as tired as years previous to this. Work ethic and endurance is what’s going to fuel us.”

Hopefully for the Rams, that preparation actually translates to more success at home. Last year, CSU went 8-10, which is not awful considering that some of the toughest games on the schedule were played at Ram Field.

CSU spent much of the early season away from Fort Collins, going 4-1 at home while playing 19 games at neutral sites and two away games.

“It’s hard being on the road a lot early because you don’t get to hit at home,” Fisher said. “When you’re on the road, your batting practice is kind of scaled down. We’ve enjoyed being home and being outside where we can hit out on the field. You get cabin fever from being in the cage.”

During the Rams’ recent run, Reinke’s command on the mound has been a cornerstone, with Reinke going 7-0 in her last seven starts.

“The team has a lot of confidence in her, and that’s what she projects,” Fisher said of Reinke.

Reinke credited the fielding for her recent dominance – .091 ERA over her last four appearances, including three complete games. But, she cannot pitch every game, so more consistent offense will be key the rest of the season.

“I’d like to get the bats going a little more and get some more run support, but the defense has been tremendous,” Fisher said.

What the Rams have lacked at times in hitting, they have quietly made up for in patience, drawing the third most walks out of any team in the MW. Hutton, who is currently batting .395 and may go down as one of the Rams’ best hitters in program history, is just six walks shy of the CSU record for bases on balls.

Reinke said that while she respects what San Jose State (CSU’s first MW opponent) does at the plate, she tries not to focus much on the matchup, and prefers to just trust her stuff.

What makes the matchup unique, she said, is that now the Rams will finally have their crowd behind them.

Hutton hopes they can take advantage of the three-game home series to begin conference play on a good note.

“Starting off 3-0 at home in conference would be great, so that’s our goal,”

CSU is set to begin the first game of a doubleheader against SJSU Thursday at 2 p.m. at Ram Field in Fort Collins on the CSU campus. The second game of the day is scheduled for 4 p.m., with the series then wrapping up at 2 p.m. Friday.