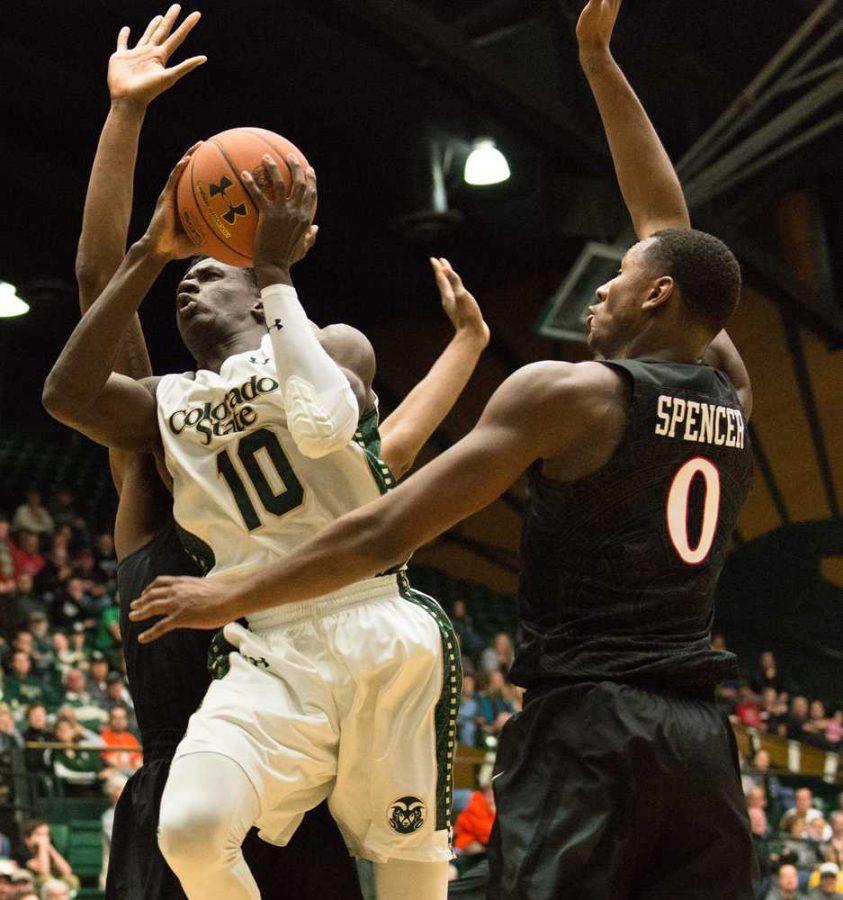 Emmanuel Omogbo threw down a SportsCenter Top 10-caliber dunk in the first half Tuesday night at San Diego State.

Instead of pumping up the Rams and keeping them on their first-half roll, though, the highlight simply made the Aztecs angry.

After a strong start out of the gate, in which the Rams built a double-digit lead with the help of Omogbo’s slam, the Aztecs caught right up and ended up winning another close game with CSU 69-67.

Jump shots had been falling for CSU, whose freshman guard Prentiss Nixon came out with the hot hand in his first career start. The true freshman shot 3-for-4 for eight points in the first, but he along with everyone else cooled down to close the frame. Largely due to improved perimeter defense by the Aztecs, CSU missed its last 13 field goal attempts of the half, and SDSU stormed back with some big buckets.

Aztec sophomore forward Malik Pope took the lead from CSU for the first time on a dunk of his own with 1:04 to go in the first, putting the Aztecs up 30-28. Jeremy Hemsley hit a layup with 14 seconds remaining in the half to put SDSU up 32-28 at the break. Hemsley finished with 16 points and five assists. SDSU was led by Trey Kell’s 19 points.

The Rams recovered from their cold stretch to end the half. SDSU extended its lead to six in the opening minutes of the second half, but the Rams stuck right with them. From the 17:43 mark until the final buzzer, they found themselves in a true back-and-forth battle, with neither team establishing more than a four-point advantage in a game that featured 10 lead changes.

“I saw a different, even-keel tempo type team I’ve been looking for all year in the second half,” CSU coach Larry Eustachy said. “I thought we really handled the crowd, I thought we handled the officiating, which you’re not going to get a break on. I thought we made the plays.”

CSU even had a chance to tie it at the buzzer and force overtime. Thanks to two clutch 3-pointers down the stretch from De Ciman and Antwan Scott, the Rams had the lead 65-62 with 2:51 to go. But Pope loves playing against the Rams. He hit a bucket to bring SDSU back within one, and then Hemsely hit a go-ahead jumper with 1:07 to play to take a 66-65 lead. Last time, Pope’s 14 points were crucial to SDSU’s tight win at Moby Arena in January. He scored 10 Tuesday, more than double his season average of 4.9.

The Aztecs couldn’t put it out of reach Tuesday night at the free throw line when the Rams started to intentionally foul, though, and Nixon almost answered the call for an unexpected game-winner. With eight seconds left, the freshman looked ready to pull up from beyond the arc in the right corner, but just before doing so, he dribbled the ball off his foot and it rolled out of bounds, forcing the Rams to foul again.

“All he had to do was not dribble it off his foot, jump up and hit a three and he’s a total and complete hero, so like I say we’re not going to go off the last couple plays,” Eustachy said. “There’s an aura when they (San Diego State) have the lead with less than five minutes to go, it’s just crazy. I really thought we had a chance going into this game. … It was just a great game, it was a great college basketball game, it was a great atmosphere and it had everything. I was proud of our guys, I hope our Ram fans are proud of them.”

With CSU down 68-65, John Gillon drew a foul and made both to cut it to one, and after another SDSU trip to the line, CSU was back down by two, 69-67. Gillon made it to the hole in the final seconds, but the guard’s full-court drive ended with a shot that was strong off the glass, and the Aztecs captured another one to stay perfect in Mountain West play.

“It’s tough, you never get a favor,” De Ciman said. “We played well. I’m really proud of our team. We had a good effort, but we didn’t get the job done. We weren’t surprised with where we were at the end. From the beginning, Coach Eustachy said if we do our game plan and execute it, we’re going to be there in the end, and that’s where we found ourselves.”

Close games have been the theme of CSU’s season. Its last nine games have been decided by eight points or less, and the Rams are 4-5 over the stretch. While there is no perfect formula to win a close college hoops game, De Ciman said his team just needs to stay more poised in late game scenarios. CSU committed two turnovers in the final minute Tuesday night.

“That’s why Steve Fisher is a legendary coach and this (SDSU) program is at where it’s at,” De Ciman said. “When the game is on the line, and maybe they didn’t play as well as they could have, they make those three plays that win them the game. … We just need to kind of slow down and trust ourselves and the work we’ve put in because we have put it in.”