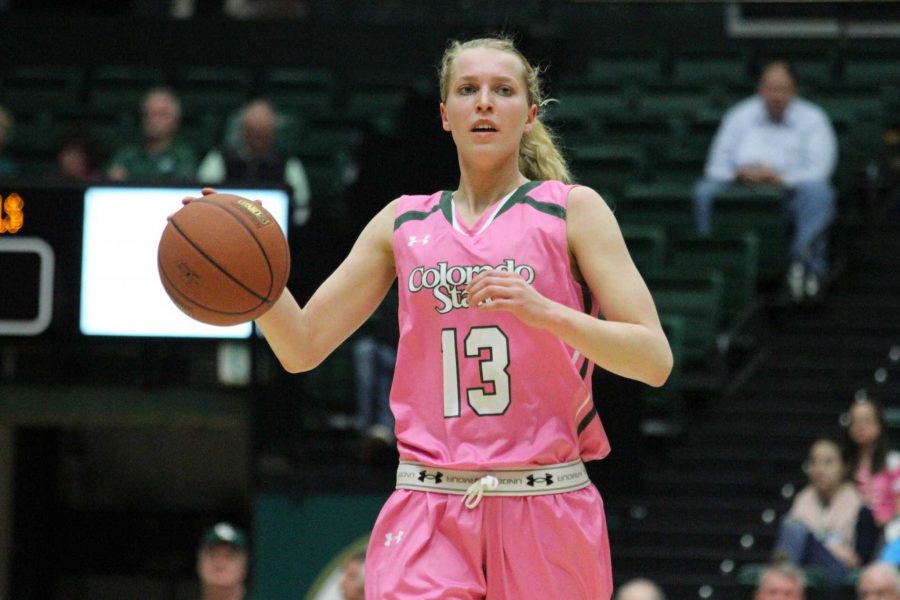 Sam Lounsberry
Never before has a team dominated the Mountain West in women’s basketball the way CSU has this year. With three more wins, the Rams (25-1, 15-0 MW) can end conference play undefeated. And their consistently wide margin of victory in most of their wins is impressive. In eight different conference games, CSU won by at least 20 points, and on the year it has won by an average of 17.8 points per game.
So, when the conference announces its six seasonal awards for Player of the Year, Defensive Player of the Year, Sixth Player of the Year, Freshman of the Year, Newcomer of the Year and Coach of the Year, CSU will take home a minimum of three of them. At least, it should.
In fact, the Rams truly deserve four awards, but even though they are by far the best defensive team in the league, Defensive Player of the Year honors will likely go to Fresno State’s Bego Faz Davolos, who leads the MW in both rebounds (9.8 per game) and blocks (4.0). If CSU does win four of the yearly awards, though, it will be the most any team has won in a single year in MW history.
Here are the awards the Rams will most likely win:
Player of the Year: Ellen Nystrom

CSU forward Ellen Nystrom attempting a shot in a game against Utah State earlier this year. Photo by Kevin Olson.

Anyone who has paid attention to MW women’s hoops over the past three years knew this day would come. Nystrom  has been considered one of the jewels of the league since her freshman season, when she became the first CSU player ever to record a triple-double. In the two seasons since, Nystrom has become a dominant force. The junior out of Lulea, Sweden is probably the most versatile player in the MW. She can do it all on offense – stroke jumpers from both the mid-range and 3-point land, get buckets on the drive, handle the rock, set up
the offense and find teammates for open looks. Plus, her ability as a defender allows her to guard just about any player on the floor. Though her conference stats of 11.0 points per game, 5.9 rebounds and 5.3 assists (third in the MW) might not jump off the page, Nystrom is unquestionably the leader of the team that has nearly swept the conference.
Sixth Player of the Year: Alana Arias

CSU forward Alana Arias releases a shot during a game against Denver University earlier this season. Photo by Sam Lounsberry

If the 6-foot-4 Alana Arias played on another team in the league, she would certainly be starting and may even be the centerpiece of its offense. The forward out of Brazil has built her game on efficient scoring close to the basket. Last season, Arias proved herself as a weapon head coach Ryun Williams could bring off the bench for instant offense, as she possess one of the most accurate jump shots in the league. Since last season, Arias has added to her game a hook shot and tough to defend up-and-under moves for layups. Shooting at a clip of 50 percent (fourth in the MW) in conference play this year, Arias averages 8.0 points per game and 5.0 rebounds in 16.9 minutes off the bench.
Coach of the Year: Ryun Williams

How could the coach whose team ran through the first 15 games of conference not win this award? Under Williams, the Rams came into the season with a stalwart defense, and their defensive principles have only improved throughout the season. At the other end of the floor, Williams has put together an effective offense, too. The Rams average just 12 turnovers per game and a nice 15 assists, while forcing their opponents into nearly 16 turnovers per contest. That’s not a bad assist-to-turnover ratio for a whole team. Additionally, Williams coached CSU to a school-record 22-game win-streak that has yet to end. With the streak came CSU’s first AP Top 25 ranking since 2002. The Rams are currently ranked No. 25 in the poll. This year will be the second time Williams has won the award, as he won it the first time in 2014.
CSU will look to extend its win-streak against Nevada on Saturday at 2 p.m. MT. Fans can watch on the MW Network or listen to the 1410 KIIX radio broadcast. With a win, CSU secures at least a share of the MW regular season title for the third straight season.
Sam Lounsberry can be reached at sports@collegian.com and on Twitter @samlounz.
Delete Image
Align Left
Align Center
Align Right
Align Left
Align Center
Delete Heading