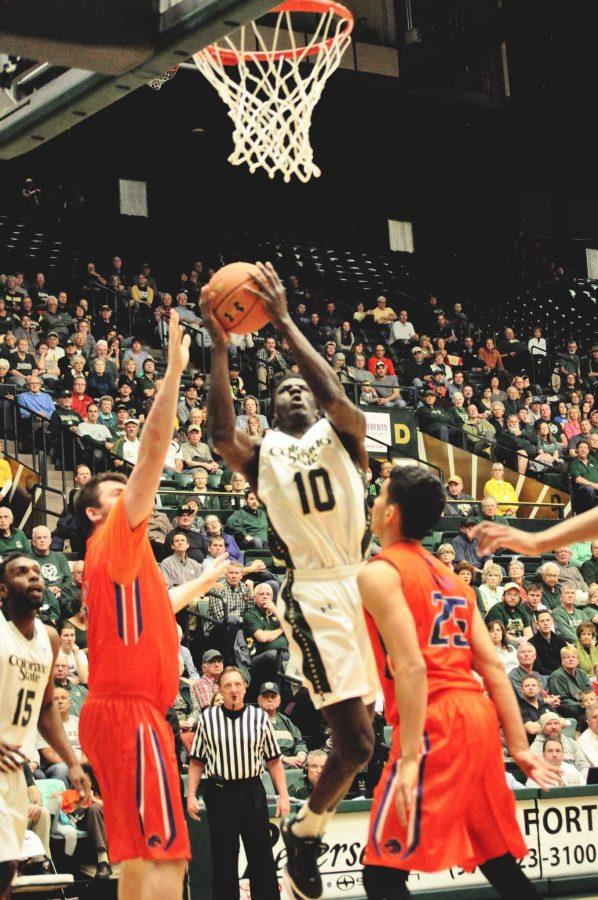 It looked as though Colorado State lost its conference matchup with Boise State Wednesday night until the refs waved off James Webb’s seemingly game-winning 3-pointer at the end of overtime to force a second frame. The Rams (14-10, 6-5 MW) walked away from the wild night in Moby with a 97 to 93 win over Boise State (16-9, 7-5 MW).

At the end of the first overtime, the Broncos has 0.8 seconds to get their shot off. After a long debate, where a stopwatch was used by the officials to judge the final play, the refs concluded that the shot took almost 1.3 seconds, and waved off the would-be game winner.

The buzzer-beater followed a turn of events in which CSU coach Larry Eustachy thought that BSU head coach Leon Rice called a timeout with .8 seconds remaining after the Broncos gained possession off a loose ball, only Rice didn’t have a timeout, meaning the Broncos would have been assessed a technical foul. However, Rice was actually asking that officials review how much time should have been remaining.

The crowd of 3,067 in Moby Arena followed Eustachy’s lead in frustration, and were quickly quieted as Webb banked in a three off of one foot as time expired in the first overtime.

In a tightly contested game in which every whistle was met with a barrage of boos from both ends, the refs took their time to make sure they got the most important call of the night right.

“I thought we lost, I said here we go same old story,” Eustachy said. “It took a lot of courage to figure out the right call.”

The officials waved off the buzzer-beater, and then the Rams took over in the second overtime.

“The protocol on any last-second shot, after the shot is made, you go to the monitor to review whether the shot was taken in time or not,” lead official David Hall said in a statement approved by the Mountain West. “We followed the protocol, we went to the monitor and we reviewed whether the shot was taken in the 0.8 seconds that was on the game clock when the ball was inbounded. We did that and we noticed that the game clock was not started upon touch. We then used a stopwatch overlay from the monitor review system to determine when he touched it and then figure out how many tenths of a second it took from the time he touched the ball until the time he released the ball and whether he was able to get that shot off in that 0.8 seconds. After reviewing that several times we determined that the shot was late. It was not taken in that 0.8-second time frame, but actually closer to 1.2 or 1.3 time frame. As a result, the basket does not count.”

Led by Antwan Scott and John Gillon the Rams jumped out of the second overtime on a 9-0 run and never looked back.

After Rice received a technical with 1:09 remaining in the second overtime period, Gillon hit two free throws to stretch the Rams’ lead to eight with just over a minute left.

But the Rams did just enough to hang on for the four-point-win.

“We got blessed with another chance,” Gillon said. “I told (them), we aren’t going to waste this chance. We’re going to go out and get this win.”

The wild overtime finish almost never even happened, as Tiel Daniels just missed a contested layup as time expired in the second half.

“It felt like the world was over,” Daniels said. “I make that shot a hundred times, I make that in my sleep. For me to miss it , it was heartbreaking. But, hey, I’m glad we got the win because I wouldn’t have been able to sleep tonight.”

Daniels said that Webb admitted to him afterward that he probably fouled him on the final play of regulation.

Antwan Scott and John Gillon both scored 19 points to lead the way for CSU, as five Rams ended the night in double figures.

Gillon was especially clutch down the stretch, scoring 12 of his 19 points in the two overtimes.

Emmanuel Omogbo finished just shy of a double-double with 13 points and nine rebounds. For the night, the Rams outrebounded the Broncos 49-34.

Led by redshirt senior guard Montigo Alford, Boise State’s offense came from the 3-point line for most of the game. Alford hit 7 of 11 threes on his way to a game high 25 points.

For the game, the Broncos went 18-for-35 from three, good for almost 52 percent from the arc, yet they still walked away without the win.

“It was a bizarre game, just Bizarre,” Eustachy said.

The Rams head to Las Vegas Saturday, to take on UNLV at 8 p.m. MT. The game can be seen on ESPNU.

Collegian Sports Reporter Eric Wolf can be reached at sports@collegian.com.