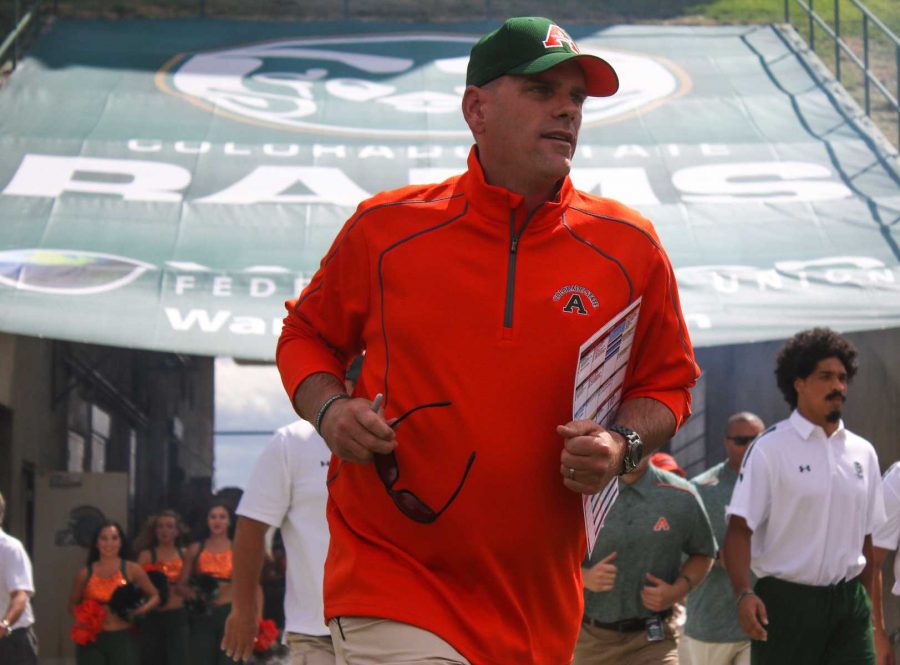 Why we still utilize a technology as ancient as the fax machine is neither here nor there; the faxes will start coming in Wednesday as players will make their college destinations final on National Signing Day.

While it is Mike Bobo’s second official signing class, it will be the first in which the recruits were his targets from the very beginning. The Rams will lose a plethora of seniors – some walk-ons, some starters, some walk-ons turned starters – as well as star receiver Rashard Higgins, who will forego his senior year of eligibility to enter the NFL Draft. Much like every other year, now is the time to reload.

Let’s go over CSU’s biggest needs on both sides of the ball, so that you have a little more context for when those faxes start coming in Wednesday.

CSU is losing all four starters from last season’s defensive line, as well as its best pass rushing linebacker in Cory James. While there is plenty of talent and experience returning in the linebacking corp, the front-line will lack depth without Joe Kawulok, Justin Hansen, Martavius Foster, Terry Jackson and hybrid pass-rusher SteveO Michel. The Rams return Josh Lovingood, Jakob Buys, Colton Foster and Darnell Thompson, and can also expect contributions from Richard King, O’Shea Jackson and Salofi Gaoa. However, linemen can get banged up easily, and it will be important to start adding depth for the future, which makes this the most crucial area to build.

On the other side of the football, the Rams lose two of the anchors from the offensive line in Sam Carlson and Kevin O’Brien. The Rams have managed to remain an above average running team in past years despite losing stars upfront. Maintaining the identity of being a strong blocking team starts with adding more linemen now, even if they will not be expected to contribute immediately.

While it is not always fair to expect new recruits to play right away – be them freshmen or transfers, many will redshirt – that might not be true of CSU’s signees in the secondary. The Rams will be graduating starting cornerback DeAndre Elliott, starting safeties Trent Matthews and Kevin Pierre-Louis, and another reliable safety in Nick Januska. Jake Schlager and Justin Sweet have played well at both safety positions, and Preston Hodges, Tyree Simmons and Braylin Scott have seen significant action at cornerback. However, they cannot be expected to play every snap. Expect Mike Bobo to land some junior college transfers who can help out immediately in the secondary.

For the sake of convenience, and because tight ends and fullbacks have played similar roles in Bobo’s offense, we can lump these positions together. CSU loses both of its star tight ends in Kivon Cartwright and Steven Walker, as well as the devastating blocking of fullback Nu’uvali Fa’apito. Look for Mitch Parsons to play a big role as a tight end and for Danny Nwosu to see lots of action at fullback, but don’t be surprised to see multiple junior college tight ends sign with CSU Wednesday.

Despite losing backups Coleman Key (transferring) and Craig Leonard (forgoing senior year) the Rams have options for the 2016-2017 season. Nick Stevens knows how to run the offense and performed well as the starter last season, so that should create for a fun fall camp with graduate transfer Faton Bauta entering the picture and J.C. Robles taking off his redshirt. That said, it never hurts to have some some competition in fall camp, and it’s never too early to start grooming the future shot callers. Stevens only has two years of eligibility remaining, while Bauta only has one, so you can expect Bobo to add another arm for when that competition reopens in coming years.

Much like the quarterback position, the Rams are set for this coming season, but must begin thinking further ahead, as well as accounting the possibility of injuries. Dalyn Dawkins got banged up last year and only has one season left. Izzy Matthews looked like a star last year, and Deron Thompson can play, too. But it pays to be loaded in the backfield, especially when you are as run-heavy of a team as CSU was last season. Look for Bobo to sign a running back or two.

Collegian Sports Editor Emmett McCarthy can be reached by email at sports @collegian.com and on Twitter @emccarthy22.