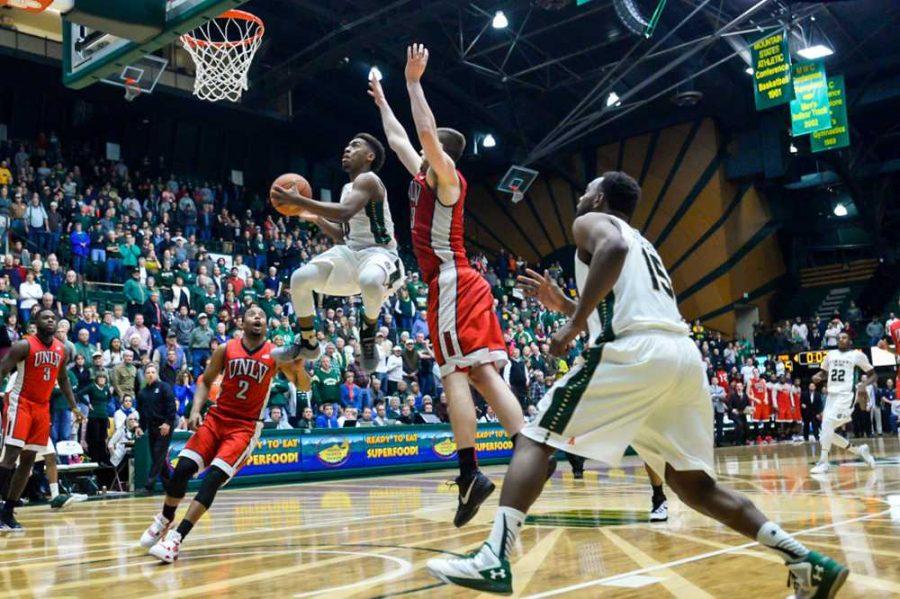 The Rams, facing a UNLV team stockpiled with talent, needed what they have all year: a couple good bounces, a lot of grit and some timely shooting.

Each of those were on display at Moby Arena as the Rams erased a 10-point deficit in the final seven minutes en route to a thrilling 66-65 win over the Runnin’ Rebels. It was little-known redshirt freshman Jeremiah Paige who willed the Rams to victory though, scoring seven points in the final 48 seconds. After Paige’s and-one gave the Rams a two-point lead, UNLV guard Patrick McCaw scored on a running layup to tie the game with seven seconds to go.

Speedy guard John Gillon got the inbounds pass and raced the length of the court for a layup, where he got fouled by the Rebels’ Ben Carter with 1.1 seconds to play. Gillon missed the front end of the two-shot foul, but swished the second, giving CSU a one-point lead. McCaw’s last-second, three-quarter court heave missed the mark, and the Rams held on for their second one-point win over UNLV in a row.

The Rebels, who touted one of the highest-rated recruiting classes in the country coming into this season, have now lost three in a row to CSU, including an 83-82 heartbreaker last season at Moby Arena. Despite the disparity in talent and size between the teams, CSU has had the Rebels’ number, in part because of the disrespect they sense from UNLV.

“Coming in, we knew everybody kind of thought, ‘Oh UNLV, they’re so talented, they’re going to kill us,”‘ senior center Tiel Daniels said. “But we seen them in warmups, they were so lethargic, looking like the Harlem Globetrotters out there, they thought they were in league (NBA) already. So we kind of took that as motivation. They come in thinking they were just going to run us over, and we got’em. We took a couple punches and we gave a couple punches, and in the end we got the win.”

In what was a ragged first half, CSU was able to fight off a few different UNLV runs, and used a run of its own to take a 33-29 lead into halftime, in part because of the stellar play of freshman guard Prentiss Nixon, who scored 11 first-half points on 4-for-7 shooting, in just 12 minutes of action.

Instead of falling into the Rebels’ helter-skelter, up-tempo style, CSU was able to play under control for most of the game, and committed just 12 turnovers compared to UNLV’s 18.

The Rams came out of the gate rolling in the second half, extending their lead to as many as nine points with 15:11 to go, but the Rebels had a run of their own up their sleeve. Between the 17:23 mark and the 9:20 mark of the second frame — just over eight minutes — UNLV went on a 25-8 run to turn a seven-point deficit into a 10-point lead. What was an excited Moby Arena crowd suddenly fell silent as the Rams faced a double-digit deficit with just under seven minutes to go.

But little by little, CSU, led by Daniels, clawed its way back into striking distance, cutting UNLV’s lead to just three with 2:04 to play. After a pair of free throws from Mountain West Preseason Freshman of the Year Stephen Zimmerman Jr., it was Paige’s time to shine. Coming into Wednesday’s game, Paige had played sparingly for CSU, mostly spelling starters Antwan Scott and John Gillon.

With Scott struggling from the field though, CSU head coach Larry Eustachy turned to Paige, and he delivered.

“He showed a lot of character, going in there as a freshman and making that play,” Eustachy said.

His pair of free throws brought the Rams within three with 48 seconds to go. Then after a turnover on the ensuing inbounds play, Paige knocked down a jumper to bring the Rams within one.

Following a missed free throw by Zimmerman and a CSU timeout, Paige caught the ball at the right wing and sliced through the Rebels’ defense, finishing the layup, drawing the foul and sending the Moby Arena crowd into a frenzy all in one fell swoop.

When asked what was going through his mind during the final minute, Paige paused, then with a big smile he said, “Win.”