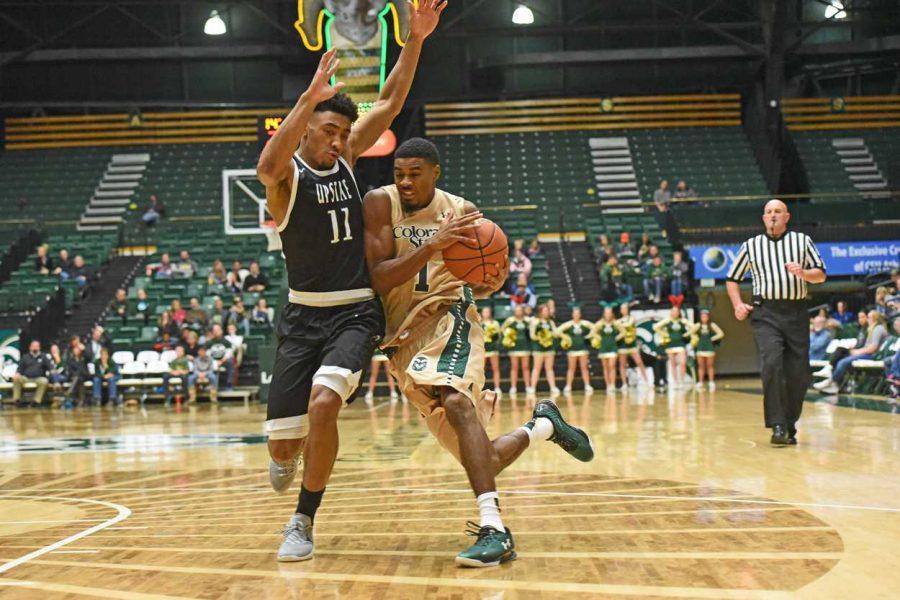 Locked in a tight battle with lowly South Carolina-Upstate and looking to get off of a five-game losing skid against Division I teams, Colorado State needed a spark.

The Rams found one in the freshman duo of Prentiss Nixon and and Jeremiah Paige.

CSU’s two reserve guards, who weren’t expected to play a huge role this season, came off the bench to hit four consecutive 3-pointers midway through the first half and give the Rams a lead they would never relinquish. On the night, Nixon finished with 16 points, while senior Antwan Scott scored 16 of his game-high 20 points in the second half to lead the Rams to an 89-61 victory over the Spartans and move to 7-5 on the year.

Following losses to UTEP, Long Beach State, Colorado, Northern Colorado and Kansas State, CSU came into Monday night’s game reeling. Without leading scorer Gian Clavell, who will miss the rest of the season with a broken hand, CSU struggled mightily to find an offensive rhythm against Kansas State, shooting just 29 percent from the field, while putting up their lowest point total of the season (56).

In front of a sparse crowd at Moby Arena, the Rams got off to a sluggish start, leading the Spartans, who have just one Division I win this season, 7-6 at the first media timeout. That’s when Nixon and Paige took over, trading 3-pointers over the next three minutes, and helping the Rams to extend their lead to 21-7 with 11:22 to play in the half. Their lead never dwindled below nine as CSU took a 41-31 lead into the break.

“It was an unfortunate situation with Gian, because he’s a great player and an even better person,” said senior Joe De Ciman, who despite scoring just three points was the only player made available to the media after the game. “I think Prentiss and Jeremiah have practiced hard all season, and they bought into the “next man up” idea, and they played well against Kansas State and they showed it again tonight.”

Unlike their loss to Kansas State, the Rams didn’t struggle to find their stroke in the first half, shooting 50 percent from the field.

Scott picked up where Nixon and Paige left off in the first half, hitting 5 of 7 shots, including 4 of 5 from behind the arc. CSU’s defense also picked up some slack, holding the Spartans to just 4 of 14 shooting over the first 12 minutes of the second frame while CSU extended its lead to as many as 30 with 7:28 to go. With starting center Tiel Daniels on the bench in foul trouble, CSU also got good contributions from junior college transfers Emmanuel Omogbo and Kimani Jackson, who combined for 17 points and eight rebounds in the second half. CSU shot 59 percent from the field in the second half, and including 5-for-9 from the 3-point line.

Monday was a career night for Nixon (16 points), Jackson (10 points) and Paige (15 points), who all recorded career highs in points against the Spartans.

“I think that our two freshman guards (Nixon and Paige), we don’t miss a beat when they come in and our older guys come out,” CSU head coach Larry Eustachy said. “Sometimes, they’re even better.”

As a team, CSU assisted on 20 of its 29 made baskets and turned the ball over just four times, while forcing the Spartans into 14 turnovers that the Rams turned into 22 points.

“Our turnovers that we were having in the previous games were just stupid plays, they weren’t forced,” De Ciman said. “I think eliminating those helped, and having 20 assists on 29 baskets, that’s what we do and that’s what we’ve always done. It’s good to get back to that.”

Clavell to have shoulder surgery

Eustachy also said after the game that Clavell, who has been playing with a torn labrum for more than a year, will have surgery sometime in the coming month. That recovery alone will be a six-month process, according to Eustachy. Clavell may be eligible for a medical hardship waiver, if he chooses to pursue it.