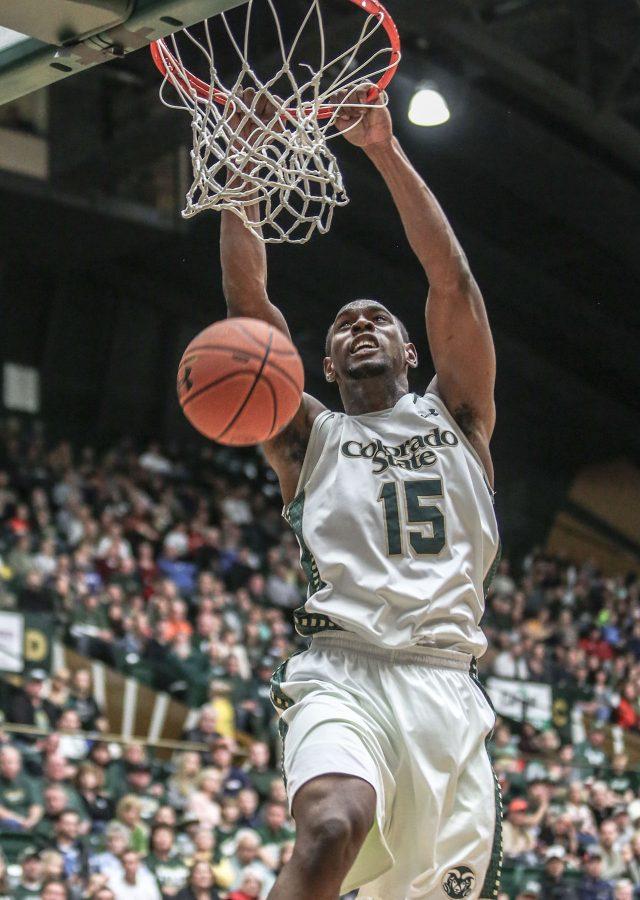 Tiel Daniels throws it down during a blowout win over Fresno State.

Not even close. The Colorado State men’s basketball team (8-5) finished the non-conference portion of its schedule in convincing fashion, trouncing Division II opponent Regis University (3-8) by a score of 77-53 Tuesday afternoon.

In a final tune-up before Mountain West play begins, the Rams led the entire game and outdid the Rangers in nearly every category.

“I thought we did some really good things today,” head coach Larry Eustachy said. “The last three games we’ve gotten a lot better. This is a tough game to play under the circumstances. I thought we came back and as a whole it was a passing grade for sure.”

Emmanuel Omogbo tallied 15 points. Tiel Daniels came one rebound shy of a double-double, and finished with 12 points on perfect 5-of-5 shooting. J.D. Paige chipped in 11 points and buried three 3-pointers while coming off of the bench.

CSU was dominant inside, outscoring Regis 40-10 in the paint and handily winning the rebounding battle 47-32. The Rams had four players pull down at least eight rebounds. Daniels had nine while Omogbo, Joe De Ciman, and Kimani Jackson all corralled eight boards apiece.

The Rams stifled Regis defensively, holding the Rangers to 33 percent shooting for the game and 24 percent from behind the 3-point line.

Daniels led the way in the first half, finishing with 10 points and six rebounds on 4-for-4 shooting that included two 3-point plays and a thundering dunk right before the horn.

Omogbo and Paige both had eight points at the break as CSU shot 48 percent from the floor.

The second half was much of the same for CSU. John Gillon knocked down two consecutive 3-pointers right away to force a Ranger timeout. From there, CSU cruised to the win behind nine points from Gillon and Antwan Scott, and seven more from Omogbo in the second frame.

For Regis, this game was played as an exhibition and will not count toward its record. The Rangers were led by freshman forward Ryan Beisty who scored 12 points, all on four 3-pointers.

After several days off, Tuesday’s game proved to be beneficial for CSU. Not only were they able to get another victory under their belts before conference play begins on Saturday, but Regis also ran many of the same looks that Boise State will, according to Eustachy.

“They run a lot of Boise’s stuff,” Eustachy said. “When you saw them pick-and-pop that’s going to be (Nick) Duncan on Saturday. I thought it was perfect timing. I thought the days off were great. We came back and worked hard. It transferred into a hard effort.”

“The non-conference was a little roller coaster, “Daniels said. “We know what we’re capable of. We’re capable of guarding teams. We just have to put it together. Everybody’s 0-0, it’s a fresh start and I think it will be good for us to get off to a good start.”

The Rams will be in Boise, Idaho to face the Broncos Saturday at 5 p.m. MT.

Collegian Sports Reporter Michael Roley can be reached by email at sports@collegian.com and on Twitter @michael_roley.