Views from the Sixth Man 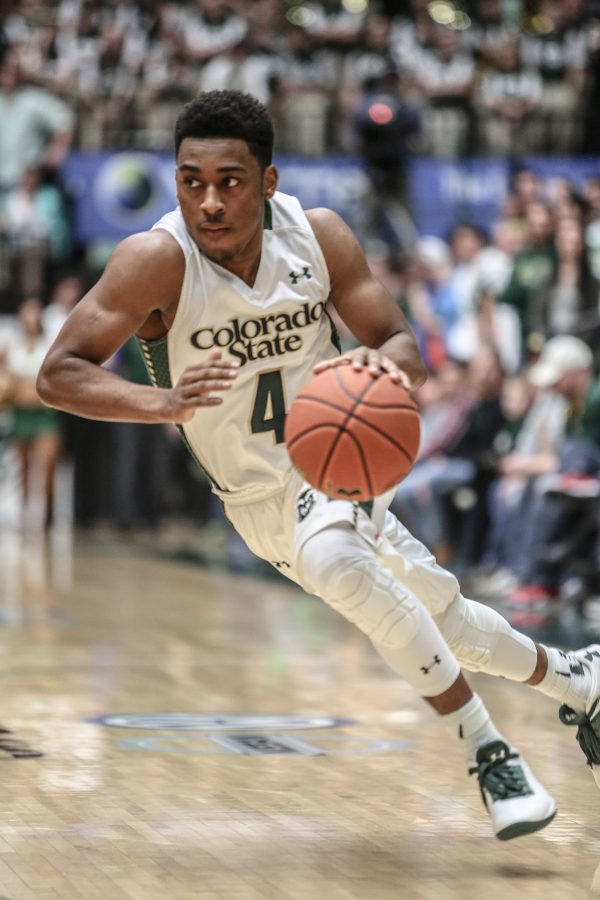 CSU guard John Gillon drives to the basket against Fresno State at Moby Arena in 2014. (Photo by Austin Simpson)

John Gillon earned Sixth Man of the Year honors last season from the Mountain West, and the only competition was his own teammate: Gian Clavell.

Neither man is a promising candidate for the award this year, as the two will likely make up the starting backcourt for the Rams. The guards averaged a combined 17.1 points per game last season (23.6 percent of the Rams’ scoring) while coming off of the bench for a 27-win Colorado State team. Both were frequently on the court to close out big games.

Clavell played in all 34 games last year, including three starts, and is the team’s top returning scorer. The senior from Caguas, Puerto Rico scored in double figures on 15 occasions, including the championship of the Great Alaska Shootout, in which he made two free throws with 5.7 seconds remaining to take the lead and win the game against UC Santa Barbara.

Gillon shot 39.5 percent from downtown, and in conference play dished out 3.9 assists per game. On New Year’s Eve, he erupted for 25 points to deliver the Rams a narrow win over Boise State. He’s extremely efficient offensively and a blur with the basketball, which drew some NBA comparison from his coach.

“I’ve had one guy that could really go by people, and he ended up being a first-round draft choice,” CSU head coach Larry Eustachy said. “Next to Jamaal Tinsley, I haven’t had a guy that can really get to the rim the way (Gillon) can get to it.”

Gillon is ranked No. 20 on Sports Illustrated’s top projected breakout scorers list heading into this season.

“He’s a true, true point guard who can shoot it,” CSU head coach Larry Eustachy said of Gillon. “He’s a hard guard, and then he’s got to be able to not be a liability at the other end, which he’s moving closer to. He’s actually better than you think at defending and rebounding. He’s got a good knack to take the ball out of the air when someone tries to lob over the top.”

While the criticisms of Gillon’s defense are often exaggerated – he can stay in front of anyone, has a good instinct for steals and defends well in transition – it is still something he has taken notice of and wants to erase.

“I died on ball screens last year,” Gillon said. “I wasn’t as active on help side when my man didn’t have the ball. When my man had the ball I’m a pretty good defender. But, over the summer and in practice I’ve just worked on getting over ball screens and I’m much better, so those comments won’t be valid this year.”

Clavell was not as efficient as Gillon, but it was part of what made him fun to watch. Both players would let it fly from anywhere and never shied after from the ball in big moments.

CSU’s rotation is heavy on perimeter players who like to shoot it. Gillon, Clavell and returning starter Joe De Ciman combined to shoot 350 threes last year, and did so at a 35.1 percent clip. Add in Antwan Scott, who shot 39.2 percent on 120 attempts in 2013-2014 at Grambling State, and you can expect to see plenty of outside shooting this year, for better or for worse.

With so many players who like the ball in their hands, and with Eustachy’s emphasis on defense, communication will be key.

“We’ve been here, so we’ve got a feel for each other,” Clavell said. “Just talking to each other in practice, ‘I like when you’re in this spot, I like when you drive and kick here’.”

The Rams lost three very vocal seniors, so Clavell is taking up upon himself to lead the conversation on the court. English isn’t his first language, but he’s loud, so it works.

“When you’re tired, you forget to talk,” Clavell said. “I try to do my best to get people involved, try and motivate people, push when they’re tired.”

It’s appreciated, and much needed from the returning players moving into even larger roles.