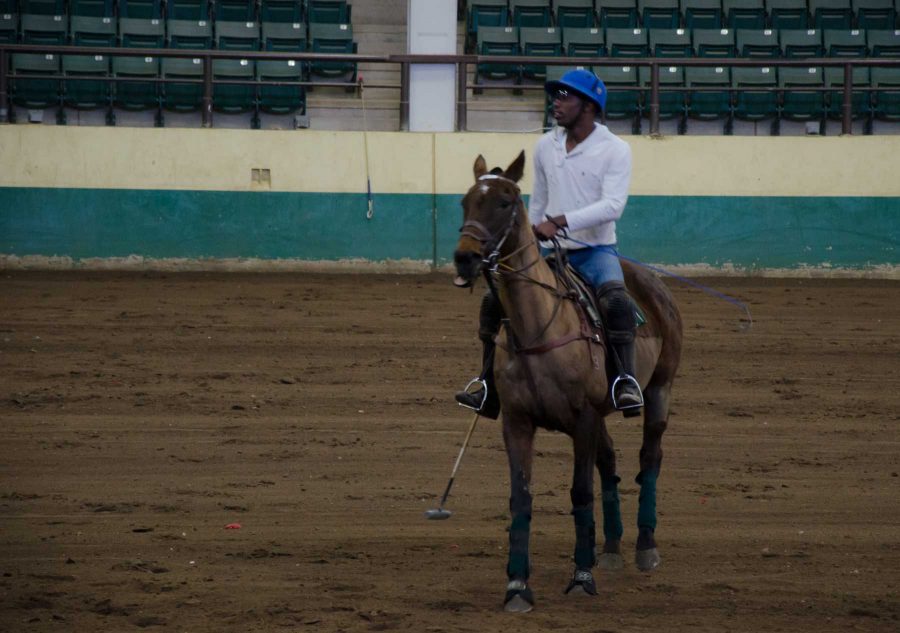 Kareem Rosser, a junior and captain of the polo team, has a calm moment during the team's practice Wednesday afternoon.

Everything senior polo player Kareem Rosser had envisioned when coming to Colorado State has come together.

“I saw the potential here and I wanted to win a national championship collegiately,” Rosser said. “I believed CSU would give me the best opportunity to do that.”

President of the club and alternate for the team James Dodge believes, “we have one of the best facilities in the country”.

After a narrow victory over Texas A&M in the finals last year, Rosser was able to cross that off of his list. Rosser led the CSU club polo team to its first title in 16 years.

“Kareem is the best single player on the field,” Dodge said.

Rosser tries not to look at it that way though.

“It was a team effort, we all did it together, even without the guys on the bench we wouldn’t have been able to pull it off,” Rosser said.

While Rosser continues to remain humble, his dominance and leadership on the field has been recognized outside the Rams organization. Rosser was recently awarded the Interscholastic Player of the Year Award by the Polo Training Foundation, which is given to the top male collegiate polo player in the country

With six players on the field at a time, and about 50 collegiate teams nationwide, Rosser had stiff competition for the award.

“It’s a great honor,” Rosser said. “I wouldn’t have been able to receive it without playing here at CSU. My teammates were a big part as well.”

While Rosser has accomplished virtually all there is to accomplish in polo at the collegiate level, his journey hasn’t been all that smooth.

He was raised in west Philadelphia, in “a pretty rough neighborhood with typical inner-city violence and drugs on the corner”. Rosser first rode a horse when he was eight years old and first played polo when he was only nine. His exposure to the game and opportunities to play were all thanks to a non-profit organization called “Work To Ride.”

The organization “reaches out to inner city youth and comes to low income families,” according to Rosser. He was introduced to Work To Ride by his two older brothers, who both played polo through high school.

Beyond the impact Kareem has had on the sport itself, Rosser is motivated by the fact that he is “able to go out and break barriers,” specifically racial barriers, and attempt to “get rid of the stereotype that the sport is just for the elite and white people”.

Although he is aware of the fact that he has had a large part in making a name for African-Americans in polo, that isn’t what he is focused on.

“My color is not the reason I win games,” Rosser said. “It’s me being a great athlete and really wanting to go out and compete and win.”

Rosser is aware that once he graduates from CSU, he will have the opportunity to pursue a professional polo career. But, while he did make a point that he will play polo recreationally after college, Rosser does not plan to play competitively.

“I don’t think I’m going to pick it up professionally because I want to pursue my academic studies,” Rosser said.

He said he is currently working to earn an economics degree, with a minor in Business.

The full lineup from last year’s championship team have all returned for this coming season, which sets the Rams up nicely for a chance to bring home back-to-back titles for the first time in school history.

However, one of the CSU horses recently showed signs of an extremely contagious disease. All of the horses had to be quarantined as a result. This led to the cancellation of the first Rams’ home game, as well as multiple practices.

It’s not the first time the club has faced the issue, as a similar event slowed the Rams roll during the 2012 season.

Dodge said the team was not phased by the incident though.

“It happened at the end of my freshman year as well,” Dodge said. “I’ve been around to handle it, a lot of our other members have too.”

Collegian Sports Reporter Eddie Herz can be reached by email at sports@collegian.com and on Twitter @Eddie_Herz.